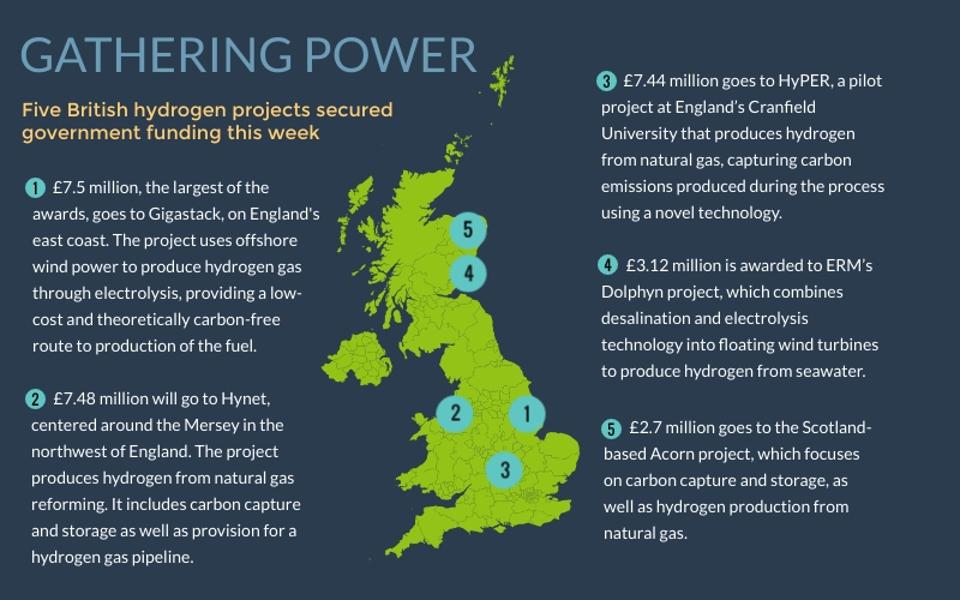 The British government this week put forward hydrogen as a key element in its plans for a transition to a low-carbon economy. On Tuesday, energy minister Kwasi Kwarteng presented a £90 million ($116 million) package he said was intended to cut carbon emissions in industry and homes, in line with the U.K’s aim of achieving net zero carbon emissions by 2050.

As part of the package, £28 million ($36 million) will go towards five new hydrogen production and supply projects in England and Scotland. Two projects, titled Gigastack and Dolphyn, are trialling green hydrogen production using renewable energy, while three, known respectively as Hynet, HyPER and Acorn, are working on low-carbon hydrogen production from natural gas, as well as carbon capture technologies.

British industry reacted positively to the announcement. Tony Alderson, technical lead for hydrogen at WSP, an engineering services consultancy, told Forbes.com: “The government’s backing of decarbonized hydrogen is certainly a positive commitment to a low carbon economy, and this significant sum of money will allow a number of existing and planned projects to go to the next stage of development. 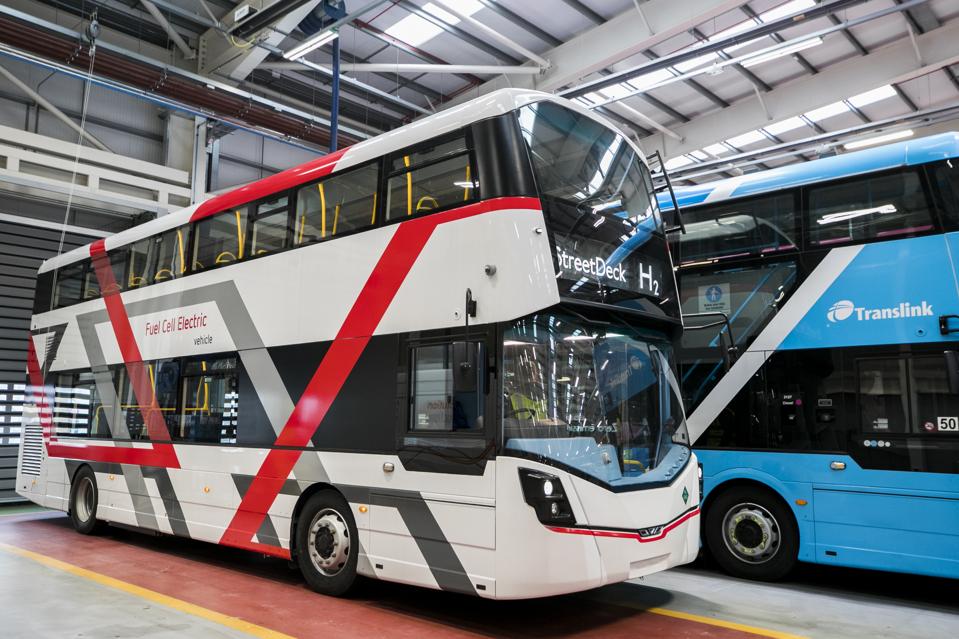 The Wrightbus, a prototype hydrogen bus unveiled by Translink in Northern Ireland last month. As a … [+] fuel, hydrogen is versatile enough to power everything from domestic heating and cooking to public transport and energy generation.

Alderson said that green hydrogen and hydrogen from natural gas should not be seen as competing technologies—rather that the two methods can complement one another. “They each have a role to play—the UK certainly has need for both. The development of decarbonized industrial clusters will allow decarbonized hydrogen projects to share onshore and offshore carbon capture infrastructure with power generation and industrial decarbonization projects and create regional low carbon hubs.”

Referring to Gigastack, the green hydrogen project that won the largest funding contract, RenewableUK’s head of policy and regulation Rebecca Williams said: “Green hydrogen has the potential to be a gamechanger in the energy sector, accelerating the transition to net zero emissions. This is a ground-breaking project, with what will be the world’s largest offshore wind farm set to provide renewable electricity to make green hydrogen, which can be stored to make our power system more flexible, or used as a clean fuel for transport, industry and heating.”

So what exactly makes hydrogen the new wonder-fuel?

The short answer: it’s clean. Very clean. But there’s more to it than that.

As a fuel source, hydrogen is far from new. Until the 1970s, most domestic gas used in Britain came from coal and comprised around 50% hydrogen. But coal gas, also known as town gas, proved dirty and relatively expensive to produce, requiring a complex process known as gasification. It is also dangerous, containing 10% carbon monoxide. 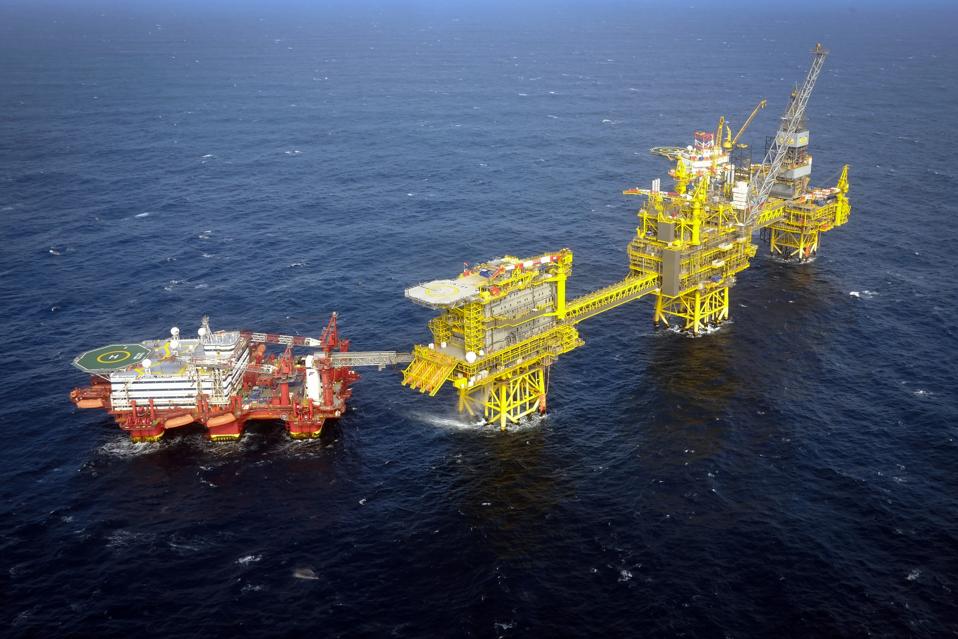 The Total Culzean gas platform, some 45 miles east of Aberdeen in Scotland. Since decommissioning … [+] most of its coal-fired power stations, Britain has become heavily dependent on natural gas.

Coal gas was replaced by liquid natural gas (LNG), which was more reliable, cheaper (particularly in Britain, adjacent to an abundant supply located under the North Sea) and less dangerous, containing no carbon monoxide.

But LNG is a hydrocarbon, and though it produces approximately half the emissions of generated by coal, its widespread popularity for industrial and domestic uses has made it one of the dominant man-made sources of CO2. To make matters worse, LNG is comprised largely of methane, a greenhouse gas 84 times more potent than CO2 in its first 20 years following release. And as a recent study has found, human activity is responsible for a far greater proportion of atmospheric methane than previously thought.

Hydrogen, by contrast, creates zero emissions at the point of use, producing only water as a byproduct. But despite being the most common element in the universe, hydrogen is difficult—and therefore expensive—to produce in its pure form.

This is where new technologies come in. 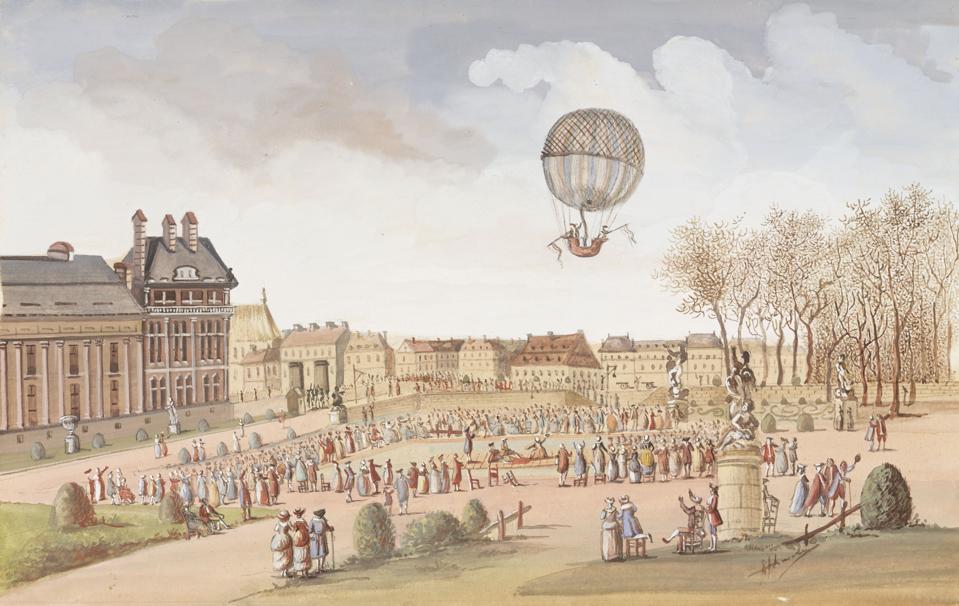 Blue-sky thinking: hydrogen isn’t exactly an unknown quantity, but the gas could become a … [+] revolutionary component in the transition to zero-carbon economies.

Acquiring hydrogen has until now depended largely on the separation of the gas from fossil fuels such as natural gas. In the most widespread process, steam-methane reforming, high temperature steam is used to break down methane from natural gas into hydrogen, and the less desirable byproducts carbon monoxide and carbon dioxide.

Now, carbon capture and storage technologies have been developed to prevent CO2 generated by the process from getting into the atmosphere. Along with more efficient technologies for reforming hydrogen from natural gas, this tech constitutes a low-carbon (as opposed to no-carbon) solution for hydrogen production. These are the technologies being trialled at Hynet and at Cranfield University’s HyPER in England, and by the Acorn project in Scotland.

Another method for hydrogen production, electrolysis, separates water (H2O) molecules into hydrogen (H2) and oxygen (O2), creating no greenhouse gas emissions of any kind. When the electricity used to power the process is also renewable, this method can be considered a zero-carbon process.

That is where “green” hydrogen becomes becomes possible. Green hydrogen uses renewable electricity, such as that generated by offshore wind turbines, to power electrolysis. This method is being refined at England’s Gigastack facility. Meanwhile, the Dolphyn project, to be piloted off Scotland, incorporates desalination and electrolysis processes into the base of wind turbines, creating a one-stop green hydrogen facility.

Social Storytelling In 2020: Should Your Brand Try...

Post-Coronavirus, How Telemedicine Could Upend The Healthcare System.