Eli Manning Will Get His Giants Send-Off After All 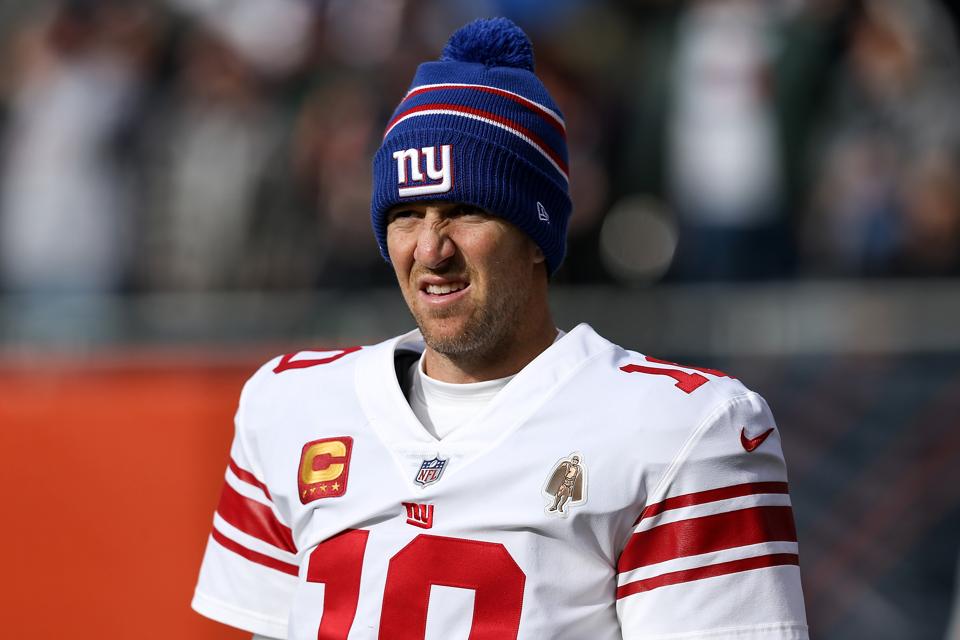 CHICAGO, ILLINOIS – NOVEMBER 24: Eli Manning #10 of the New York Giants looks on before the game … [+] against the Chicago Bears at Soldier Field on November 24, 2019 in Chicago, Illinois. (Photo by Dylan Buell/Getty Images)

The minute Giants head coach Pat Shurmur decided that September afternoon to flip the switch on the Daniel Jones era, it was a bittersweet moment in franchise history.

No, this wasn’t any ordinary quarterback switch; the anointing of Jones, the sixth overall pick in the 2019 draft, as the Giants starting quarterback spelled the end of the Eli Manning era after 15-plus years that consisted of four Pro Bowls, two Super Bowl Championships and two Super Bowl MVP honors.

But as Manning stood before his locker that day in September for what many thought might be the last time—he would fade into the background during media availability so as to not steal the limelight from his young teammate or create distractions for his coaches or employers—he reminded people that he wasn’t dead yet, while Shurmur told people that Manning was “an ankle away” of being called upon in a game.

So here we are, 11 weeks later, and that ankle has popped up, forcing Jones to miss his first start since loudly announcing himself with an NFC Offensive Player of the Week award-winning performance in a Week 3 win over the Bucs.

It will be Manning’s show to run Monday night when the Giants visit the Philadelphia Eagles, leading a team that technically has nothing to play for following their self-elimination from the postseason last weekend.

It’s not the way anyone would have preferred Manning’s farewell to unfold. No one wanted to see Jones injured, and everyone was hoping that by now, the Giants would be in the thick of the playoff race.

But these are the cards that fate has handed the Giants and whereas Manning would never have accepted a ceremonial goodbye—not that one was planned—he can at least go out there and end his days as a Giant on his terms.

“I think you’re always eager to play; that’s why you play,” Manning said in front of his locker Tuesday.

“That’s why you compete, and you work out and do everything— to go out there and compete on game day and get wins and put your team in a situation to win. I think when you’re not doing that, you miss it, and you’re excited about the competitive part of it.”

In a further twist of irony, Manning will get his chance to compete with a full plethora of offensive skill players—receivers Golden Tate and Sterling Shepard, running back Saquon Barkley, and tight end Evan Engram are all expected to be active and available for the first time this season.

Manning, in typical fashion, hasn’t given a second thought to the chain of circumstances that led to his return to the field. He’s insisted that he is locked in on preparing for the Philadelphia Eagles, whom the Giants face on the road Monday night, and believes that he’ll be sharp when the passes start to count for real.

“Yeah, you’re still practicing, you’re still out there,” he said. “Sometimes you’re running other people’s plays, but you’re still throwing it, hitting guys in stride and trying to throw it accurately and doing all of the drills. Hope to get back there and be sharp.”

As for beyond the upcoming Eagles game, Manning would rather not think that far ahead, though he might not have to since the Giants have committed to Jones as their franchise quarterback.

“Again, take it one game at a time. You never want to try to make decisions about your future while you’re still living in the present and don’t know the circumstances of what could happen,” he said.

“Just have to go out there and try to get a win for the Giants if I’m asked to do that. I’ll analyze everything else after the season.”

But until then, he’ll at least get to say goodbye to the fans who supported him through thick and thin in the only way fitting of a franchise icon.