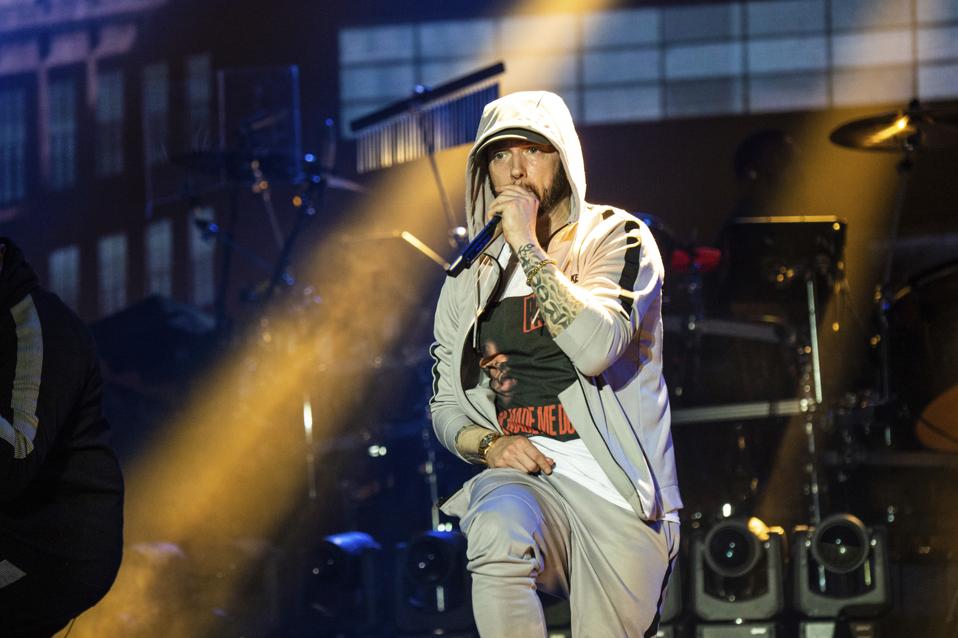 Eminem performs at the Bonnaroo Music and Arts Festival on Saturday, June 9, 2018, in Manchester, … [+] Tenn. (Photo by Amy Harris/Invision/AP)

This week Eminem receives yet another accolade – the No. 1 spot on Billboard’s Artist 100 chart for Feb. 1 – making him the top music act in the U.S. for a fourth week. The American rapper can attribute the honor to his new album, Music to Be Murdered By, which ironically but not surprisingly is facing much controversy.

The new album, also No. 1 on Billboard’s Top Rap Albums chart for Feb. 1, has received much criticism about the appropriateness of its lyrics and the message they send to listeners. It also includes alarming references to the 2017 Las Vegas mass shooting as well as bombing that occurred the same year at an Ariana Grande concert in Manchester, England.

Eminem, or Marshall Mathers, responded in an open letter that admits the album may be perceived as offensive but that the content is not meant to be a literal representation of murder. His letter reads, “This album was not made for the squeamish. If you are easily offended…this may not be the collection for you.” Then he continues, “…please listen more closely next time.”

Debatable lyrics aside, the Detroit hip-hop star pulled ahead of other artists, leaving Halsey at No. 2 and Mac Miller at No. 3 on the same Artist 100 chart. Even 2020 Grammy-sweeping star Billie Eilish trails behind at No. 6. The Billboard Artist 100 chart was released in 2014 as a weekly recognition of artist popularity, and Eminem has appeared on the list for a total of 283 weeks.

Eminem has won 15 of his 43 Grammy Award nominations and performed four times at the event. He took home his latest Grammy Awards in 2014 for Best Rap/Sung Collaboration for “The Monster” and Best Rap Album for The Marshall Mathers LP.

Taking questionable artistic risk has somehow worked well for Eminem, who has grown a massive following. A 2017 New York Times study in partnership with YouTube geocoded streaming data revealed that Eminem’s domestic fan base is concentrated in more rural areas including West Virginia, southern Ohio and eastern Kentucky. He is also best received in northern Maine, the Ozarks of Missouri, across the Great Plains and in his hometown Detroit.

Music to Be Murdered By was released with no advanced warning and also set a record as Eminem’s tenth No. 1 album on Billboard’s 200 chart. This achievement places him ahead of Kanye West who has nine and tied with Elvis Presley, who also recorded ten No. 1 albums.

Eminem has recorded 88 Billboard Hot 100 songs and also recently reached No. 3 on the list for his Juice WRLD collaboration “Godzilla.” This places him behind Roddy Ricch’s “The Box” and Drake and Future’s “Life is Good.”

Lessons We Can Glean From Billie Eilish’s Meteoric Success

What This Beauty Brand Learned From A Multi-Million...

Markets Slide As Europe Scrambles To Contain The...

Why Aren’t We Talking About Banking Disruption?