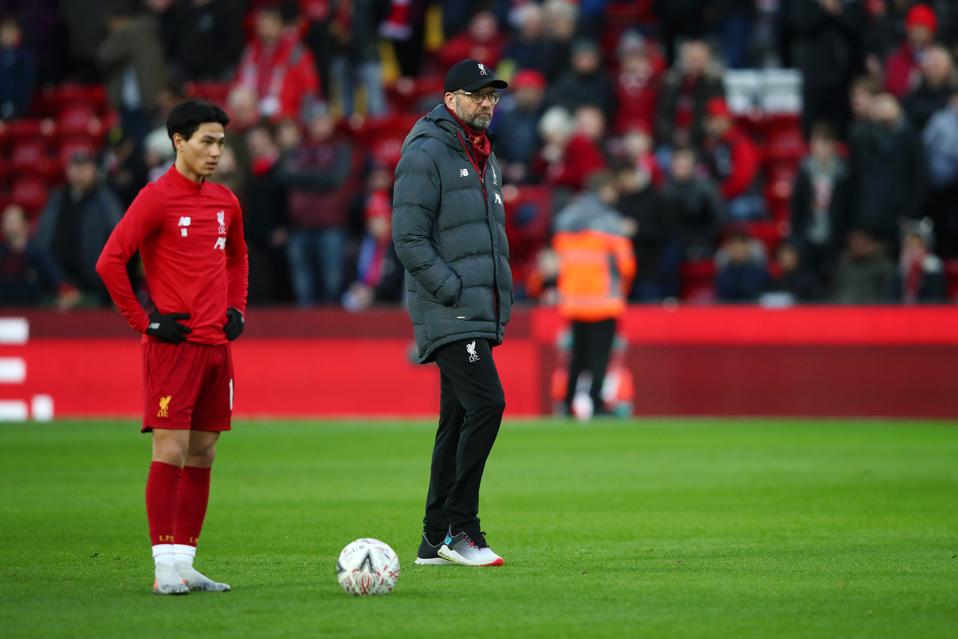 LIVERPOOL, ENGLAND – JANUARY 05: Jurgen Klopp, Manager of Liverpool watches as Takumi Minamino of … [+] Liverpool warms up prior to the FA Cup Third Round match between Liverpool and Everton at Anfield on January 05, 2020 in Liverpool, England. (Photo by Clive Brunskill/Getty Images)

If Liverpool manage to avoid defeat in their next two games, they will match Nottingham Forest’s unbeaten run that stood for over 25 Years. Then Jurgen Klopp’s men will only have Arsenal’s Invincibles ahead of them in the all-time English top-flight unbeaten league run charts. But Liverpool won’t be breaking another of Brian Clough’s records any time soon.

With two games in two continents in 24 hours, it would be fair for Jurgen Klopp to complain about this. He was unable to pick his best squad for both games and prioritized the Club World Cup over the League Cup. But he hardly played his strongest squad in the previous League Cup rounds, or in the FA Cup third round tie against Everton. Klopp could still win the FA Cup this season, but he was willing to risk missing out on the treble (and the bragging rights over Manchester United that go with it) despite having the league already effectively in the bag. He is unlikely to play his strongest side in the FA Cup fourth round match against Shrewsbury Town, even if that match does go to a replay.

That hardly anyone knows about the longest unbeaten run in all competitions shows how England’s cup competitions have been given less importance by the biggest teams and the media these days. Apparently, only Premier League (and Champions League) games mean anything at all. As soon as a club gets knocked out of the League Cup, their fans claim it is a “Mickey Mouse Trophy”. Liverpool certainly aren’t the only team to have played basically their youth side in their domestic cup fixtures this season.

The reason is simple: money. These games simply aren’t worth enough to the big clubs to take them seriously. And yet there are many lower league clubs that depend on the cup competitions for extra revenue. A televised 3rd round replay could be worth more than the annual revenue of a smaller League One or League Two side. Many people claimed to feel sorry for Bury when they went bust earlier in the season, but are perfectly happy to reduce the money that goes to clubs like Bury if it benefits their own clubs.

Jurgen Klopp and Pep Guardiola have both made their disdain for England’s cup competitions well known. Despite playing weakened sides in the cup, they claim there are too many fixtures in English soccer.

But in the 1980s, there were four extra top-flight games a season, cup finals could go to a replay, and some cup games could have more than one replay if the first replay finished in a draw. Now Premier League sides can only face a replay at all in the third or fourth round of the FA Cup.

The number of domestic games in English soccer has actually gone down. The reason for the “fixture congestion” is that clubs used to have to play nine games in order to win the European Cup; now they play 13 games. Funny how you rarely hear managers complain about too many Champions League games, isn’t it?

While Jurgen Klopp has been in the media asking for the number of games to be reduced, his club have reportedly been meeting with people who are trying to add more competitive games to the schedule.

According to the New York Times earlier this week, Liverpool were among the clubs that who were reportedly addressed by Miami Dolphins owner Stephen M. Ross over turning the International Champions Cup into a big-money competition, essentially a Champions League for the summer.

Once upon a time, pre-season matches were for building up fitness and preparing for the new season. Now they are money spinners, played across the globe with little recovery time between matches, excluding the time spent on long-haul flights. The summer is when players traditionally rested and recovered after a grueling season. Turning pre-season matches into something more competitive would get more fans through the door, but it runs the risk of fatiguing players before the real season has even begun.

The media have lapped up Klopp’s and Guardiola’s comments about fixture congestion, with figures like Gary Lineker also calling for FA Cup replays to be scrapped, using the most unfashionable matches possible as an example and blaming low attendances on the FA Cup itself rather than altered kick-off times or the ever-growing expense of watching a soccer match in England.

The drip-drip of information is similar to how rail companies give small stations irregular trains that fit into nobody’s schedule so that the numbers justify their closure. A good example is the Club World Cup, which was constantly disparaged as being unimportant and not worth playing (when the real problem was just that it was played during the season). The result of that was that the current format was scrapped and replaced by something that means even more games for big clubs and more opportunities for someone else to make a profit off soccer.

To be fair to Jurgen Klopp, he has spoken out against things like plans for a European Super League, and he absolutely has the right to his opinion on fixture congestion, especially in the case of the two games in 24 hours.

But when the media and fans ask for replays to be scrapped, they aren’t helping reduce fixtures. They are merely giving ammunition to those who want to get rid of soccer’s traditional competitions, and replace them with something they can make a bit of money off at everyone else’s expense, something that will benefit a few superclubs and their billionaire owners, and make life even tougher for lower league sides struggling to break even.

The European Super League may not be replacing the Premier League any time soon, but there is a real risk of it replacing England’s cup competitions by stealth, and that won’t solve fixture congestion, it’ll just move those fixtures abroad.

Avoiding The Paycheck Creep. Here’s Why Your Raise Threatens Your Retirement