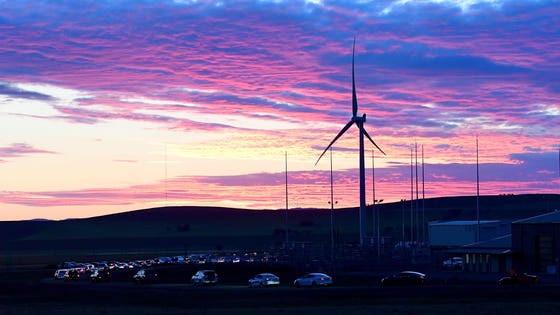 Since the turn of the century, there has been a global explosion in the production of renewable power. According to the 2018 BP Statistical Review of World Energy, global renewable energy production in 2000 was 218 Terawatt-hours (TWh). By 2018, that number had reached 2,480 TWh, with average annual growth over the past decade averaging 16%.

This rapid increase in renewable power has been driven by falling cost curves, and aided by legislation directed at reducing air emissions like carbon dioxide. But it has also required utilities to accommodate this influx of intermittent renewable power.

Because renewable sources like wind and solar power can suddenly change output with little warning, the ability to store intermittent power has become more important. Historically, pumped hydroelectric energy storage (PHES) has been the primary type of grid-scale storage. PHES involves pumping water uphill to a reservoir, and then allowing that water to flow back downhill through a turbine as needed.

PHES still accounts for about 95% of all grid-scale storage, but that number has been falling in recent years as battery storage solutions have become more economical.

In December 2017, the largest battery storage system to date was connected to the grid in South Australia. The 100 megawatt (MW) Hornsdale Power Reserve was built by Tesla to back up the adjacent 315 MW Hornsdale wind farm.

That’s still only about 1/30th the capacity of the world’s largest PHES facility. However, the Energy Information Administration (EIA) recently reported that battery storage capacity has quadrupled in the past four years. A 409 MW solar battery storage project is expected to start up in Florida in 2021.

Of course, the emissions associated with the normal operation of a facility will be dependent on the kind of energy used to charge the batteries. In the case of Hornsdale, that’s wind power, which has one of the lowest carbon emission footprints of all electricity sources.

A 2019 paper from IVL Swedish Environmental Research Institute reviewed the available carbon emissions data for lithium-ion batteries. The study looked at the commonly used NMC battery pack (a battery with roughly 30% nickel, 30% manganese, and 30% cobalt in the cathode).

The study looked at three steps in the manufacture of the battery:

The authors found that the production of the upstream battery materials generally comprises the largest share of the emissions, which they identified as 59 kilograms (kg) of CO2 equivalent (eq) per kilowatt-hour (kWh) of battery capacity. The cell production and battery pack assembly consume more electricity, so this process is highly dependent on the type of electricity used. For this process, the authors estimated a range of 0-60 kg CO2-eq/kWh battery, with the range considered 100% renewable power, up to primarily power derived from fossil fuels.

Thus, the combination of the steps led to an overall carbon emissions range of 59-119 kg CO2-eq/kWh battery, with a midpoint of 89 kg CO2-eq/kWh. This is a cradle-to-gate number.

At the end of life, the battery should be recycled, which imposes another GHG burden. The authors indicated that because of the potential for supply risks with battery materials like lithium, cobalt, and nickel, “recycling has become something that most countries consider necessary for the continued adoption of lithium-ion batteries today and into the future.”

End of life recycling wasn’t considered in this study, although a previous version of this study did look at the recycling step. Erik Emilsson, one of the study’s coauthors, explained the reason they opted not to include recycling this time:

“There is a large variation in the methods used to calculate recycling which adds unnecessary uncertainties to the estimate. The main issue is how the credits from recycled materials are added (sometimes accidentally twice) or not included at all in the modelling for the production. In addition to differences in modelling, recycling of the car batteries is still in its early stages due to the lack of end-of-life car batteries available.”

In the 2017 paper the authors assessed several current technologies, and after projecting where the lithium-ion battery recycling industry may end up, settled on a GHG footprint for the recycling step of 15 kg CO2-eq/kWh battery.

The authors also noted that the EU has adopted Product Environmental Footprint Category Rules (PEFCR). A PEFCR battery study reported that 12% of the GHG emissions of a lithium-ion battery’s lifetime occur at the end of life stage. At the previous midpoint of 89 kg CO2-eq/kWh, 12% would add another 11 kg for a total of 100 kg CO2-eq/kWh.

The PEFCR study stated that the energy efficiency of lithium ion batteries is 96%. Thus, there is a loss of approximately 4% as the battery is charged and discharged.

Bear in mind that this GHG footprint is a one-time charge for the battery. Thus, the overall carbon footprint of the wind farm is going to depend on the number of cycles the battery achieves. (I reached out to both Hornsdale and Tesla multiple times for some guidance on this regarding battery chemistry and the number of expected cycles, but received no response).

The PEFCR study stipulates that lithium-ion batteries can be expected to have around 400 cycles. That means the battery can be fully charged and discharged 400 times before the battery capacity drops to an unacceptable level (defined as 60%). Because this capacity declines over time, the PEFCR study said “the minimum energy provided over life can be calculated as 400 times the average capacity per cycle (80% of initial energy).”

The PEFCR study provides us the basis for estimating the carbon footprint contribution from the lithium ion batteries. The Hornsdale battery storage system has a total generation capacity of 100 megawatts, and 129 megawatt-hours (MWh) of energy storage. Over 400 cycles of charge and discharge — at 80% of initial energy — that amounts to 41.3 gigawatt-hours (GWh). At 96% battery efficiency, that means 43 GWh of wind power must be generated for the battery to supply this much energy.

The life cycle GHG emissions associated with electricity production have been estimated by the National Renewable Energy Laboratory (NREL). For onshore wind power like the Hornsdale wind farm, there are an estimated 30 g CO2-eq/kWh GHG emissions. A gigawatt is a million times larger than a kilowatt, so for 43 GWh, this becomes 1.3 million kilograms of carbon dioxide for just the wind generation piece during the 400 cycles of the battery’s lifetime.

In other words, based on 400 cycles, the total carbon footprint associated with the electricity utilizing the battery storage into this wind farm is 1.3 million plus 12.9 million = 14.2 million kg of carbon dioxide divided by 43 GWh of electricity, or 330 g CO2-eq/kWh GHG emissions. That’s 11 times the carbon footprint of wind power without storage, but still well below the 970 g CO2-eq/kWh GHG emissions associated with coal-fired power.

Thus, the batteries themselves over their lifetime have an associated carbon emission profile of 300 g CO2-eq/kWh GHG emissions using the PEFCR assumptions.

The Impact of More Cycles

However, as I indicated a number of people challenged my use of only 400 cycles. The reality is that we just don’t have enough long-term data to get a firm estimate. After Hornsdale and Tesla failed to respond to my inquiries, I reached out to another source.

California-based lithium-ion battery supplier OneCharge told me in an email that that their batteries last at least 3,000 full cycles, and that is the basis of their warranty. They also indicated that the battery chemistry they use doesn’t contain any cobalt, which would impact the calculated emissions associated with mining raw materials.

In any case, we can redo the calculation using 3,000 cycles to determine the impact. Over 3,000 cycles of charge and discharge — at 80% of initial energy — that amounts to 310 gigawatt-hours (GWh). At 96% battery efficiency, that means 322.5 GWh of wind power must be generated for the battery to supply this much energy.

For 322.5 GWh produced by wind, this equals 9.7 million kilograms of carbon dioxide during the 3,000 cycles of the battery’s lifetime — again, just for the wind portion.

The footprint for the batteries themselves remains the same as in the example with 400 cycles — 12.9 million kilograms of carbon dioxide. The total then becomes 9.7 million plus 12.9 million = 22.6 million kg of carbon dioxide divided by 322.5 GWh of electricity, or 70 g CO2-eq/kWh GHG emissions. That’s still just over double the carbon footprint of wind power without storage, but is in the range of most other renewable power sources, which are less than 100 g CO2-eq/kWh.

Of course if the number of battery cycles end up being even higher, or future battery chemistry improves such that certain energy-intensive metals aren’t required, then the eventual carbon footprint will be even lower.

In any case, it seems likely that utility-scale battery storage using lithium-ion batteries and onshore wind power will have somewhere between 70 g CO2-eq/kWh and 300 g CO2-eq/kWh GHG emissions (using the worst-case PEFCR guidelines). Based on the feedback I have received, the better estimate is probably closer to the lower end of the range.

After ‘The Irishman’ Oscar Debacle,Where Does Netflix Go...

The Chinese Navy Is Building An Incredible Number...