Earlier this week I wrote about my favorite wide receiver sleepers for Week 14. Now, to get you as ready for the fantasy football playoffs as possible, let’s check out FantasyPros’ half-PPR running back rankings to find us some value. If someone such as Bilal Powell is available, go snag him right now.

He’s in line for at least 10-15 touches in a plus matchup and owned in just 10 percent of Yahoo leagues. Powell is currently listed at No. 53 on FantasyPros, but you should consider him a solid RB2 this week. For my list of sleepers, I’m going to try and find some players whose roles didn’t see a huge shift in the last few days. As always, if you’re still struggling with lineup decisions or your league has unique rules, FantasyPros’ Start/Sit Assistant is a great tool as well. 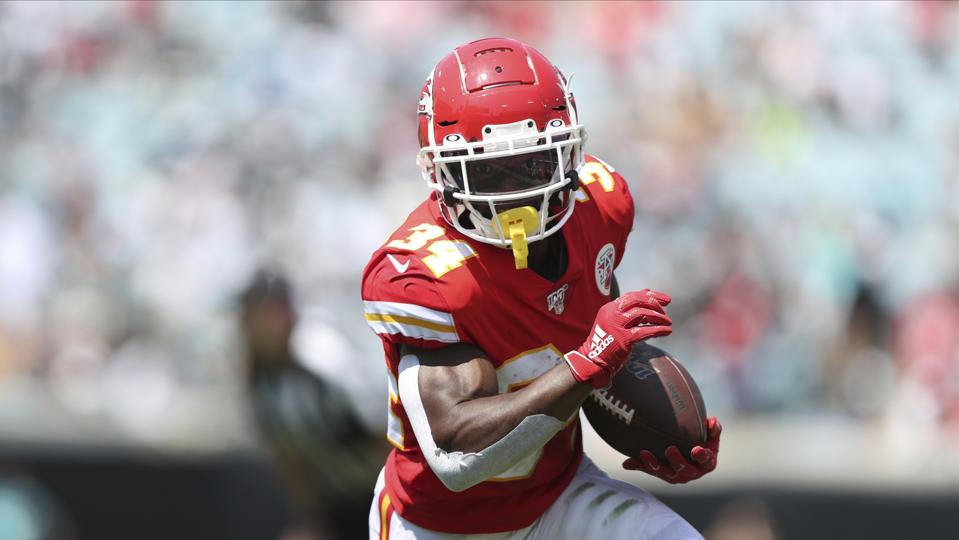 It feels like a past life at this point, but I used to be Darwin Thompson’s hype man.

I loved him as a preseason lottery ticket RB and that love remains, however dormant it was for a couple months. Damien Williams is out. Darrel Williams is out. LeSean McCoy is a shadow of himself, which leaves us Mr. Thompson, who Chiefs offensive coordinator Eric Bieniemy could not help but praise after his Week 13 performance.

Running back coach Deland McCullough also liked what he saw, “The guy has got some juice,” he told Nate Taylor of The Athletic, adding he did well enough with his assignments against the Raiders to earn more responsibility. McCullough also said that LeSean McCoy, who played 24 snaps last week, will be on a snap count for the rest of the regular season to help keep him healthy and fresh for the playoffs.

More snaps for Thompson?! Please and thank you.

The Athletic’s Seth Keysor looked at the film from last week and talked about how Thompson was doing things none of the other Chiefs RBs were able to do all year. Finding holes. Combining his excellent patience with his speed/burst allowed him to succeed without elite blocking, an area KC has struggled in all year, ranking 29th in the league in adjusted line yards according to Football Outsiders.

We shouldn’t be totally surprised about this either. It was an area Thompson thrived at in college.

If you needed more praise, Chiefs offensive lineman Andrew Wylie was all about Thompson after his first big performance.

“That dude is a blast to watch,” said Wylie. “His work ethic, every single week, and just the way he works, he’s been doing this since (training) camp. He’s a super fun player to watch, and I’m so happy for that guy.”

Looking specifically at Week 14, the matchup for Thompson isn’t ideal. The Patriots have the number one defense in the league this season and rank seventh against the run, according to Football Outsiders. But if you look beyond that, everything else we look for in our process for uncovering sleepers. he has.

We’ve seen and now heard about his talent.

LeSean McCoy ranks 54th in broken tackle rate and 57th in yards after contact per attempt among 62 players with 50 or more carries this year, Yahoo’s Matt Harmon. Spencer Ware they just signed off the scrap heap.

The opportunity is there.

Lastly, as great as the Pats defense has been, they haven’t been perfect against good offenses. With an over/under of 49 points, this is projected to be the highest-scoring matchup of the week. Not only that, but both of these teams play at a very fast pace.

My point is, to be able to get 8-12 touches, at least, in Kansas City’s offense, in a matchup with the highest-projected total of the week is as good a sleeper as we can find around this spot in the rankings. 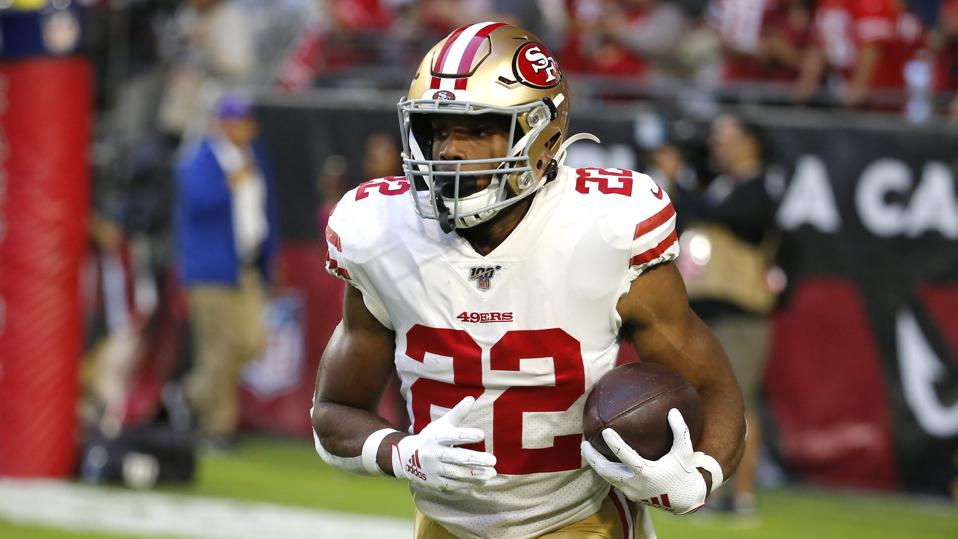 San Francisco 49ers running back Matt Breida (22) during the first half of an NFL football game … [+] against the Arizona Cardinals, Thursday, Oct. 31, 2019, in Glendale, Ariz. (AP Photo/Rick Scuteri)

I think people may have forgotten how good Breida has been this season.

Yeah, I understand the matchup against New Orleans’ sixth-ranked rush defense isn’t ideal. I realize San Francisco may have a three-man backfield with Tevin Coleman (woof), Raheem Mostert and Breida, so opportunities may be harder to come by than normal. I also know the 49ers are in the bottom-half of projected points this week.

However, if we’re this low on the weekly rankings, beggars can’t be choosers.

What I’m choosing to see, is a running back that has averaged five yards per carry on 109 touches this season. I see a guy that has a role in the passing game, albeit a small one, but any role in Kyle Shanahan’s offense could be a fruitful one.

I mean, check this run out.

Breida hasn’t played in a month, so it’s possible the 49ers are cautious with him, but in eight of his nine games he’s had at least 10 touches. The one time he didn’t, he had nine touches. He’s practiced all week and looks to be fully healthy, so if we can bank on 10+ touches with a talented back like this to beat out 47 other running backs?

That’s a bet I’d make every day and twice on Sunday.

How exactly, is a guy that hasn’t scored in his last five games, is averaging a paltry 3.5 yards per carry, with just nine catches on the season ranked as the No. 22 running back this week?

The Chiefs are terrible against the run, sure. They’re the third-worst unit in the league. They surrender the most points compared to a player’s average on the season.

Remind me what we’ve seen out of Sony Michel, or more holistically, the Patriots offense of late, to put any faith in Michel to come through during the fantasy playoffs?

Michel has finished as a top-20 RB just twice this season. James White is coming off by far his best game of the season, and not just as a receiver, rushing for 79 yards on 14 carries. Rex Burkhead has been averaging around 4-5 touches each of the last four weeks. Even if KC continues to be very generous against opposing running backs, who says Michel is the one that benefits?

Is it possible Michel has another 19 carry, three touchdown day…albeit with just 34 total yards on 20 touches? Yes. Is it something I’m willing to bet my fantasy season on?

Give me Benny Snell (ranked 25th), Jamaal Williams (ranked 27th), Marlon Mack (ranked 45th) or a handful of others.

Flu Is Now Widespread In 10 States, Including...

Ohio State Takes On Overtime Over The Letter...

How This Social Media Agency Is Revolutionizing The...