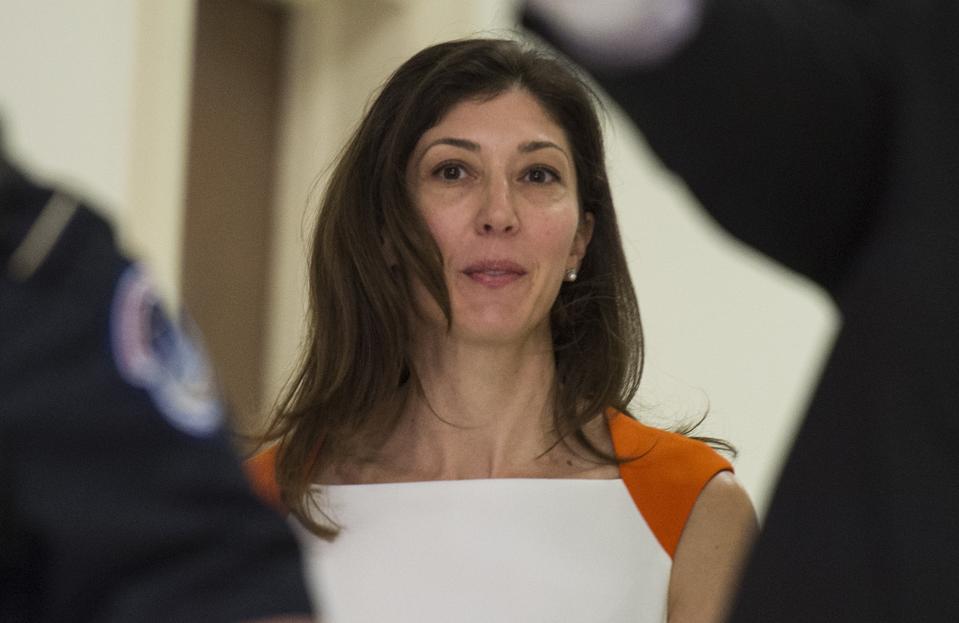 Lisa Page has spoken out about being harassed by President Trump. Many women face workplace … [+] harassment on a daily basis. Now it’s on a global stage. (Photo by ANDREW CABALLERO-REYNOLDS / AFP via Getty Images)

Harassment in any form in the workplace is unacceptable. But what happens when the person doing the harassing is the President of the United States? Lisa Page has virtually no protections. The people and agencies that should provide protection aren’t functioning as they should — and in some cases, they’re supporting the person who is harassing her. How does this mirror what women face on a continual basis in the workplace?

Page had been quiet about how she has been treated by the president, until a recent interview. She said what finally made her speak out was when President Trump acted out a fake orgasm at a rally in order to ridicule her.

Like clockwork, Trump responded to Page’s sole interview the same day with a tweet demeaning her. He tweeted about a “lover,” as he had in past tweets attacking Page. Ridiculing someone by bringing up an actual or supposed relationship is rarely used as a power and control strategy against men. It is more commonly “reserved” for demeaning women, just like criticizing appearance or weight are used almost exclusively against women.

Pitting people against an “other” is a power and control tactic used by world leaders all the way to managers. It makes the target of the harassment feel isolated. It is a form of punishment, and is frequently used by the harasser to retaliate over what he views as target’s “disloyal” behavior, or rage over the target setting clear boundaries. It is also a smokescreen, a distraction from other inappropriate or illegal behaviors, including the harassment of others.

Harassment causes intimidation and fear in the intended victim, precisely the aim of the harasser. Page states that Trump’s behavior is intimidating, demeaning, and sickening, stating “it’s like being punched in the gut.” Trump accused her of treason, and Page is very concerned that Trump is “in a position to actually do something about that. To try to further destroy my life. It never goes away or stops, even when he’s not publicly attacking me.”

Law enforcement officers will tell you that they are constantly on alert. Page is no different. She said when she sees someone on the train, “I kind of wince,” wondering if the person recognizes her or is just looking around. If she sees someone wearing clothing in support of Trump, she will purposely avoid walking near them to avoid conflict. She adds, “What I wanted most in this world is my life back.”

While supporters of Trump may feel boosted by the fact that Trump has made Page’s life difficult, “the cruelty is the point,” it speaks to a larger issue — the endorsement of harassment by the most powerful man in America. On a smaller scale, this is one of the reasons why women tend to not speak out about being harassed by men in power. One of the inevitable responses is that she “deserved it.”

Page is no different than the countless mothers, daughters, and sisters that are harassed by a person in power — except it is on a global stage. Women have had to leave their jobs or enter forced arbitration over harassment and claims against it. A significant amount women who have been harassed have thoughts of suicide, only to be told that it is “just another sign” that they are not to be believed because they are “unstable.” Being harassed at work is also associated with resulting chronic stress, physical health issues, loss of work productivity, and pain disorders. If the simple fact that inhumane treatment should never be tolerated isn’t enough for employers to protect their employees, maybe they will be reached by the negative impact harassment has on the ever-present bottom line.

What’s one of the best ways to fight harassment? Speak out about it, as Page has done. Page said that by opening up about her harassment, “I am taking my power back.” While Trump has had a global stage on which to harass Page, she withheld her voice until the pain of keeping quiet was too much — and when she knew she didn’t have superiors supporting her. The more this kind of demeaning behavior is spoken about, the less of a “payoff” the harasser receives. Support those who have been victims of harassment.

As for Page, she is adamant that she has not committed any crimes. A Department of Justice report to be released December 9th will reportedly state that the inspector general found no evidence that the FBI put undercover agents and informants inside Trump’s 2016 campaign. Agents and attorneys can put personal feelings aside and still retain ethical behavior.

How To Grow Your Startup With The Help...