Home Finance Federal Debt Is Out Of Control, But It Hasn’t Always Been This Way
Finance

Federal Debt Is Out Of Control, But It Hasn’t Always Been This Way

When the federal government spends more money than it collects, the result is a budget deficit. The deficit is added to the federal debt which, in recent decades, has spiked. If the debt continues to rise as it has, and Congress fails to take corrective action, the indebtedness of the U.S. could spell serious trouble for the U.S. economy. Perhaps the most salient question is this: Is there enough time to correct this and do our elected officials have the intestinal fortitude to do so? Also, what was the catalyst for this overspending; why did it begin? These are just some of the issues we will examine.

The Federal Deficit: A Brief History

During the first 70 years of the twentieth century, a federal budget deficit was a rare thing. When it did occur, it was usually a result of an economic downturn or during wartime (Chart A). The federal government had a deficit in 41 of those 70 years or 59% of the time.

After 1970, things changed. In the 49 years since, the federal budget had a deficit in 45 of those years or 92% of the time. What was the catalyst for this radical change in spending? To find an answer, we must return to 1971.

The Federal Deficit: The Catalyst

During the latter half of the 1960s, inflation was accelerating, and President Nixon felt the need to take corrective action. In addition to his wage and price freezes, he moved to decouple the U.S. from the gold standard. This occurred in 1971. The U.S. currency could no longer be exchanged for gold. The greenback for gold era had come to an end. When the dollar was tied to gold, the amount of currency that could be printed (and spent) was more limited. When the U.S. abandoned the gold standard, it effectively removed this restriction, opening the door for an increase in Congressional spending. Without a limit on spending, the political game rose to a new level, as officials used the power of the purse to enrich their districts and sometimes even themselves. But I digress.

Most of us are acutely aware that Congress appropriates funds to pay for a variety of expenditures. Moreover, and to a large extent, the political future of all 535 members is closely connected to the amount of money they appropriate for their district. This is a significant disincentive for fiscal responsibility. In short, members of Congress are working to “bring home the bacon” and, like bacon, there’s a lot of fat.

Debt borrows money from the future for use today. As a result, future income is consumed to repay the debt, leaving less room for discretionary spending later. More debt reduces our ability to service the debt, which leads to more debt, which reduces our ability…, and so on. How is the federal government doing? Here are the income/expense numbers as of fiscal year-end; September 30, 2019.

The most recent deficit was slightly less than $1 trillion. That additional trillion was simply added to the debt. Where does all that money go? Good question. The following chart has some answers.

Here we find the largest items in the federal budget. Weighing in at number four is the interest on federal debt. This is exceeded only by Medicare/Medicaid, Social Security, and defense spending. When you total these expenditures and compare the result with fiscal-year 2019 revenue, they equal 123% of federal revenue. Yes, I’d say the problem is with spending, not revenue. 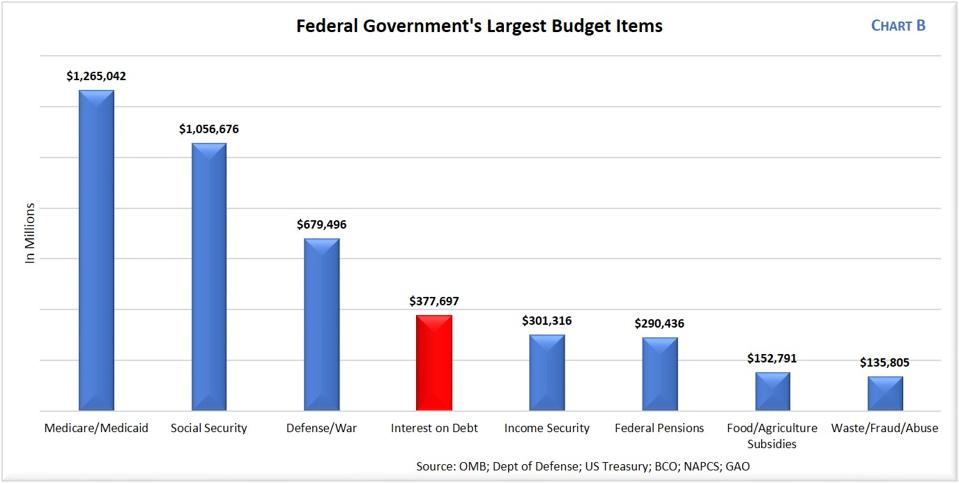 According to experts, mountains are formed by the movement of the Earth’s tectonic plates. The U.S. debt mountain was fashioned from irresponsible and imprudent spending. In both cases, the mountains resulted from actions unseen.

Let’s examine how the debt has risen over the years. The chart below shows total federal debt for fiscal years 1966 through 2019. From 1966 through 2000, the debt rose, but the debt-to-GDP ratio at the end of that period was around 44% so it was manageable. Since 2001, the federal debt has risen by almost $17 trillion. The debt-to-GDP ratio has been securely over 100% for nearly a decade.

We have looked at the history of the federal deficit; discussed when, why, and how government spending got out of control; and have seen how the debt has risen over the past half century. It seems that, given the level of recent deficits, this mountain is likely to rise at an even faster rate than it did in the past.