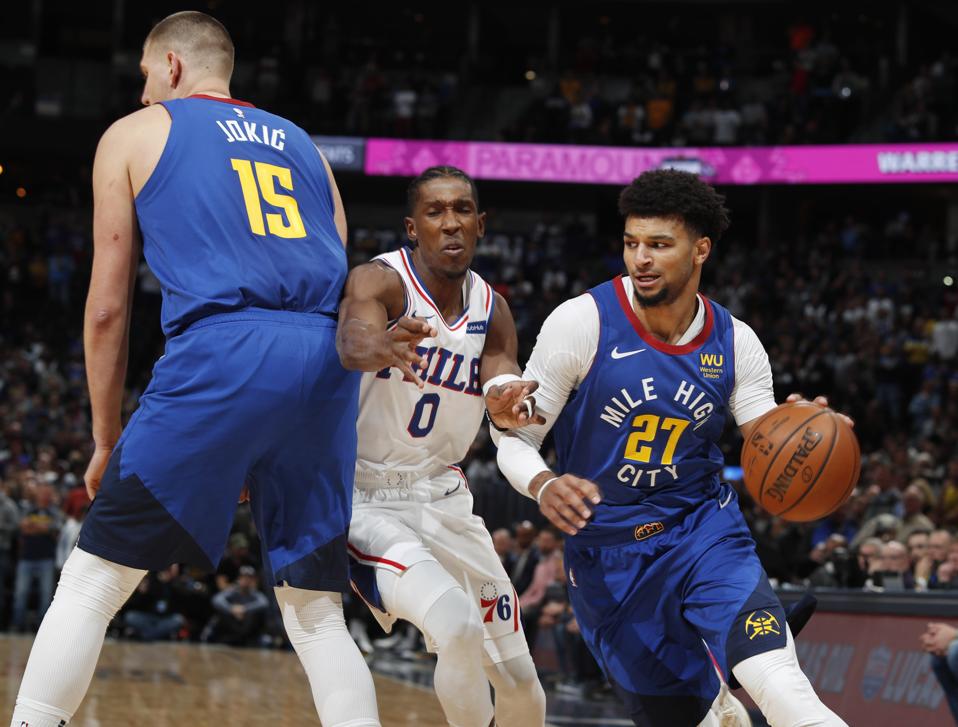 Jamal Murray’s bounce passes to Nikola Jokic out of the pick-and-roll have become the bread and … [+] butter of his assist repertoire.

Is Jamal Murray gearing up for his next big leap this season? Although the Denver Nuggets have only nine games on the books, some early indications suggest that just might be the case.

At the beginning of last summer’s free agency period, Denver reached a new deal with Murray on a five-year, $170 million extension which, according to Spotrac, is projected to carry the ninth-highest total contract value in the league from next season.

At the time the news of Murray’s big deal first broke, more than a few doubts were raised by NBA analysts and fans alike regarding his ability to ultimately live up to the lofty expectations attached to his new, hefty salary.

With the first three weeks of games now under his belt, however, Murray is starting to display an array of positive signs which point to the possibility that he could be on the verge of taking his game to a higher tier this year.

From his more vocal leadership on the court and in the locker room to a more focused and effortful defensive intensity to his flair for coming up with big shots in clutch moments, Murray is steadily assembling an early-season body of work which appears to show that he is not only embracing the challenge of playing up to his new contract, but rising to it and delivering.

One aspect of Murray’s game which has dramatically stood out through the first nine games of the season has been his passing and playmaking. Although this is not reflected in the numbers – both his assists per game and assist rate are slightly down from last season – the variety, creativity and sound decision-making Murray has displayed in creating shots for his teammates has visibly demonstrated that he is operating on a higher plane than in previous seasons. Here we take a look at a variety of different types of assists which Murray is utilizing and, nearly across the board, showing improvement on this season.

Breaking Down The Film On Jamal Murray’s Varied Assist Types

Bounce Pass Assists Out Of The Pick-And-Roll

Bounce passes out of the pick-and-roll (PnR) have become Jamal Murray’s quintessential pass du hour, and for that reason they’ll get the most ink here. These are most frequently seen when delivered to Nikola Jokic to set up his patented favorite shot, the floater in the lane. The PnR bounce pass isn’t a new development for Murray, as he really hit his stride with it as his two-man game with Jokic emerged and blossomed last season. But the good news for the Nuggets, who in many other ways have struggled this season, is that the pair have picked up right where they left off in the playoffs.

Murray has been particularly sharp with his bounce pass game this season, as it seems to have become more second nature to him. There has been some concern that Murray’s shot profile has shifted too heavily in favor of two-point shots over threes, but the danger he presents as a threat from midrange serves him well here in keeping defenses honest when Jokic rolls to the basket, as help defenders hesitate to stunt too far from him. And Murray is proving to be especially adept at splitting the defenders with the bounce pass when they switch on their PnR coverage.

Also shown in this video are PnRs with Paul Millsap and Jerami Grant. Branching out to develop better chemistry with Denver’s other frontcourt players will likely become increasingly important for Murray given the likelihood that Malone, as he did last season, will gradually move away from his hockey-style bench rotations and do a little more staggering of Jokic and Murray’s minutes. And when it comes to Murray making his next leap and earning his max salary keep, being able to run an effective offense with Jokic on the bench will be crucial for the Nuggets, who have far too often shown a propensity for completely dropping off when Jokic leaves the court.

One area of playmaking where Murray is showing very clear signs of improvement is on his entry passes, an aspect of his game which he has tended to struggle with. One of Murray’s biggest challenges in his young career has been limiting live ball turnovers, and one of his biggest weaknesses in that regard has been failing to properly deliver entry passes, whether to Jokic on post-ups or to cutters.

So far this season, Murray has flashed improved precision with his entry passes, which are looking crisper and more purposeful. Part of the issue has been mental, as even momentary hesitancy or indecision has often led to bad turnovers. Murray’s growth in adapting to the speed of the game and understanding the flow of Denver’s offense in real time is evident in how deliberately and decisively he’s passing to the inside now. And in a fun development for fans (though one that might grind Malone’s gears), Murray is going more often now to the one-armed sling pass inside, which gives his passing game some added style.

Despite the fact that Murray hasn’t excelled at getting to the rim (he’s been in the bottom third percentile for his position in at-rim shot frequency the last two seasons, per Cleaning the Glass), he’s able to keep defenses on their heels with his capabilities as a three-level scorer. When Murray drives the lane, drawing in help defenders, he’s doing a solid job this season of finding the open man on the wing, despite the fact that he often doesn’t penetrate too deep into the paint.

One thread which runs through all these assist types is Murray’s improving court vision and awareness, which is on display here especially in the first two clips, where after turning to drive toward the basket he knows exactly where the teammates behind him are positioned and turns around on a dime to hit them a quick, accurate pass.

Push Pass Assists out Of The Pick-And-Roll

This could actually be considered the PnR bounce pass assist category’s close cousin, as these also tend to be short passes dropped off to Jokic in or around the paint for lane floaters or midrange jumpers, usually when Jokic rolls to the rim in tandem with Murray driving. As with the bounce passes, Murray’s midrange threat puts help defenders in a bind and they often get caught in the middle unsure of whether to commit to him or Jokic. The first clip here is a particularly good example, where Joel Embiid is stunting over to Murray to get ready to contain his drive the rim, but in doing so gets a step too far away from Jokic to be able to recover to contest Jokic’s floater. Again, this isn’t a new addition to Murray’s repertoire, but the ease and intuitiveness with which he and Jokic seem to perform a Vulcan mind meld, knowing exactly how and when to play off each other, is just coming to Murray now more naturally and assuredly.

Assists To The Perimeter

This may be the least overtly impressive category of assists here, as these mostly tend to be fairly standard passes around the arc. But for a player like Murray who has at times tended to force his own (often not great) shot too often, simply making the right play by getting the ball to the open man is a sign of the growth and maturation not only of his playmaking and court awareness, but his unselfishness in being willing to pass up looks for himself in order to create better looks for his teammates in the flow of the offense.

Murray’s assists on the fast break have been another area where his improvement is noticeable. Getting into live ball turnover trouble when hitting a wall of indecision about whether to take the shot himself or dish it off to a teammates has been an issue for Murray here as well, but this season he’s showing a higher degree of assuredness and competency in not hesitating too much with his decision-making in transition, but instead making the quick read and executing on it with better precision.

The first clip is a great example of this, as it shows a situation where often in the past Murray would have either pulled up and dribbled, losing the chance to set up the quick open shot, or make the wrong pass, in this case most likely to Millsap, who was in Murray’s peripheral vision heading to the corner but would have been picked up and contested by his defender. Instead he’s kept the trailing Gary Harris on his radar screen and hits him for the wide-open look.