First Flight: Boeing’s 777x Finally Takes To The Skies On Its Maiden Flight

At 10am PST today, Boeing’s first new aircraft since the 737 MAX took to the skies at the aircraft manufacturers headquarters in Everett. 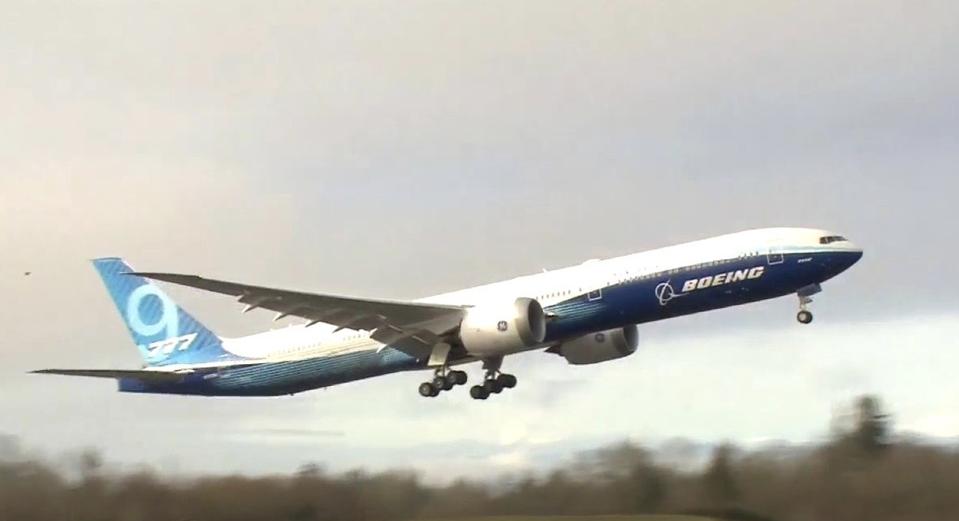 Live Feed shot of the Boeing 777X taking to the skies for the very first time today. 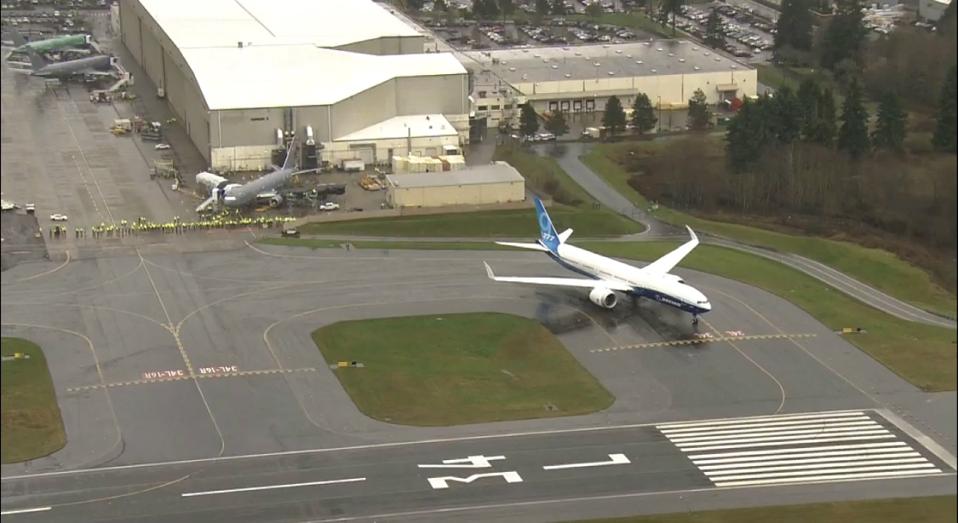 The Boeing 777X positioned at the end of the runway before the flight was canceled on Friday 24.

The long-awaited first flight of the next-generation in the 777 family positioned at the end of the runway of Everett Paine Field on what is scheduled to be a five-hour test flight. 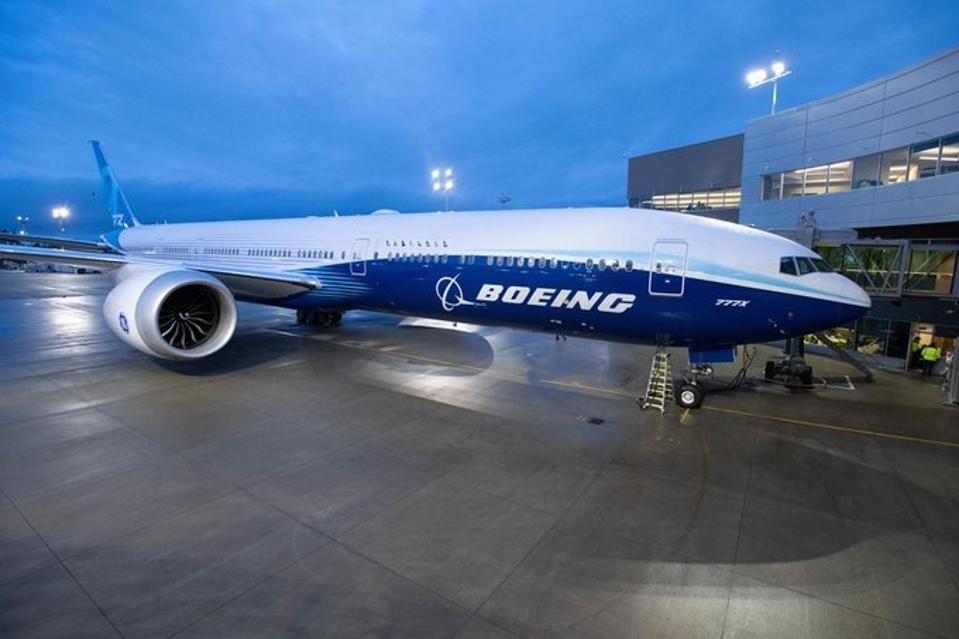 The sight of the world’s largest passenger twin-engines jet rolling towards the runway powered by its huge General Electric GE9X engines was one that was welcomed by the media and aviation experts in a highly-anticipated first flight, despite the poor weather conditions in the Seattle area.

The GE9X high-bypass turbofan engine is so large that it could only be fitted to a Boeing 747-400 Jumbo-Jet for testing, such was the size. 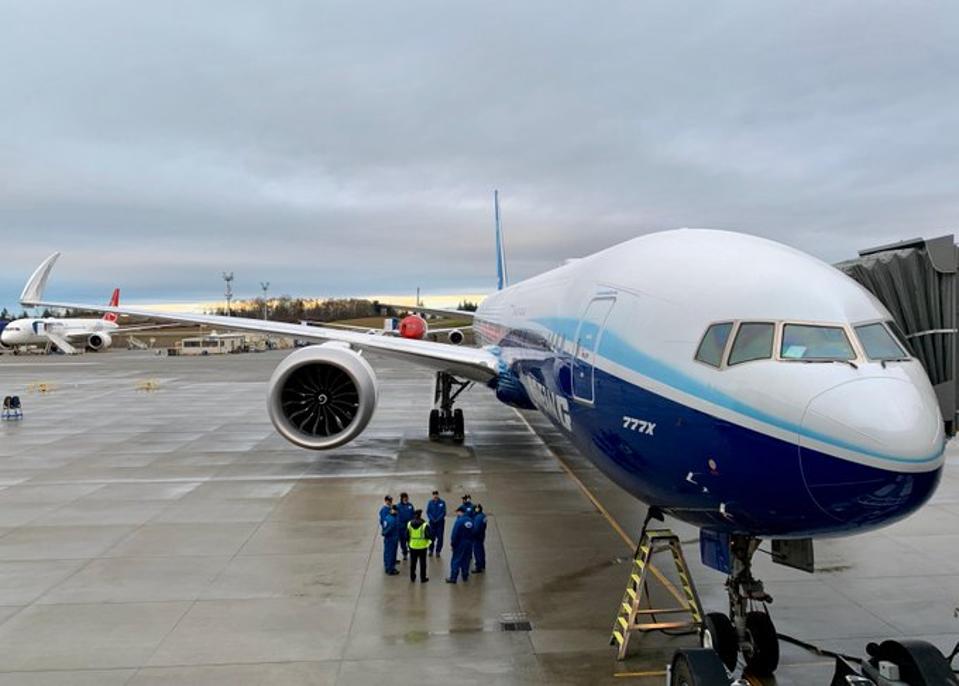 The long-awaited first flight of the next-generation in the 777 family blasted out of Everett Paine … [+] Field on what is scheduled to be a five-hour test flight. Credit: @Boeing Twitter

Boeing has originally scheduled the first 777X flight to take place on Thursday 23rd January, a day prior, but due to poor weather in the Washington state area, the decision was taken by Boeing to postpone the maiden test-flight by a day.

Subsequently Boeing then canceled the flight on January 24 as the aircraft waited at the end of the runway for nearly three hours due to wind conditions of 18 knots. For uncertified aircraft and test flights the wind must be below 10 knots, and so the decision was taken to delay the first 777x flight today.

This comes as some much needed positive press for Boeing after the global grounding of the 737 MAX after two fatal crashes. 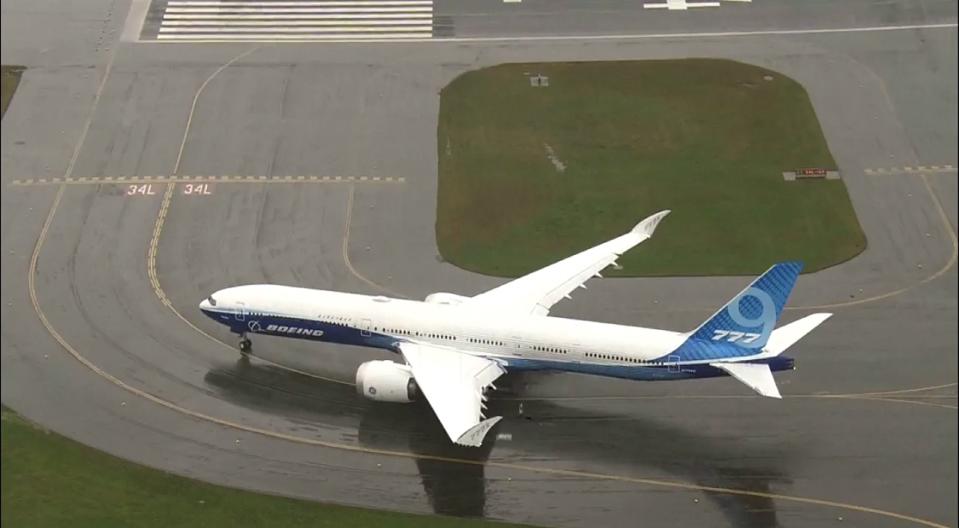 The first 777x flight was canceled for a second consecutive day due to weather.

Due to engine delays and issues with the cargo door, Boeing has already postponed the first delivery of a 777X aircraft from Summer 2020 to 2021, and the first test flight was originally meant to be scheduled before the end of the last decade. Boeing is clearly ensuring that they are getting everything right with this mammoth twin-engine plane that is easily distinguishable by its folding wingtips that will allow for great fuel-efficiency during flight, bet still be able to manoeuvre around airports without having to widen taxiways and gate stands.

What airlines have ordered the 777X?

With only just over 300 orders for the 777X, the plane has so far failed to garner the same enthusiasm that the smaller 787 Dreamliner did when it was unveiled. 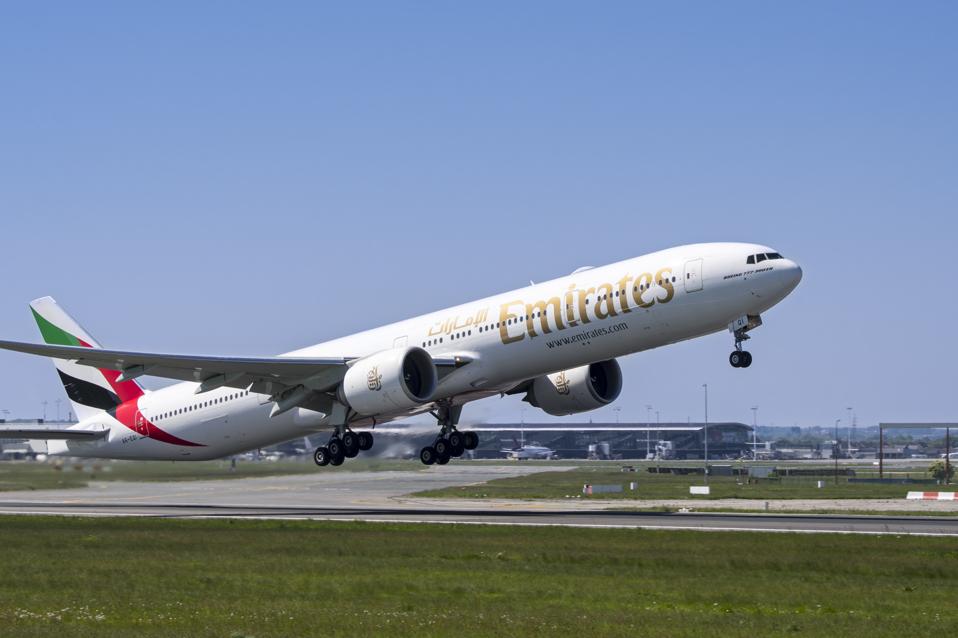 Boeing 777-300ER, long-range wide-body twin-engine jet airliner from Emirates, airline based in … [+] Dubai, United Arab Emirates taking off from runway. The largest order was from Emirates, who placed an order for 150 of the aircraft but have since reduced this to 115 aircraft after adjusting their backlog of orders to included 787 Dreamliner aircraft. (Photo by: Arterra/Universal Images Group via Getty Images)

The largest order was from Emirates, who placed an order for 150 of the aircraft but have since reduced this to 115 aircraft after adjusting their backlog of orders to included 787 Dreamliner aircraft.

Qatar Airways have placed orders for 60 of the 777X and British Airways recently announced an order (with potential additional options) that could see the U.K. flag carrier receive as many as 42 777-9 variants to replace the ageing and gas-guzzling 747-400 that they currently operate.

Lufthansa, Cathay Pacific, All Nippon Airlines and Singapore Airlines have all ordered 20 777X aircraft each as well, to replace ageing wide-body fleets.

When is the first 777X flight?

You can watch live updates of the flight happening now on Boeing’s live feed.

What Will Samsung Announce At The Samsung Unpacked...

Why Von Miller Thinks The 49ers Will Dominate...