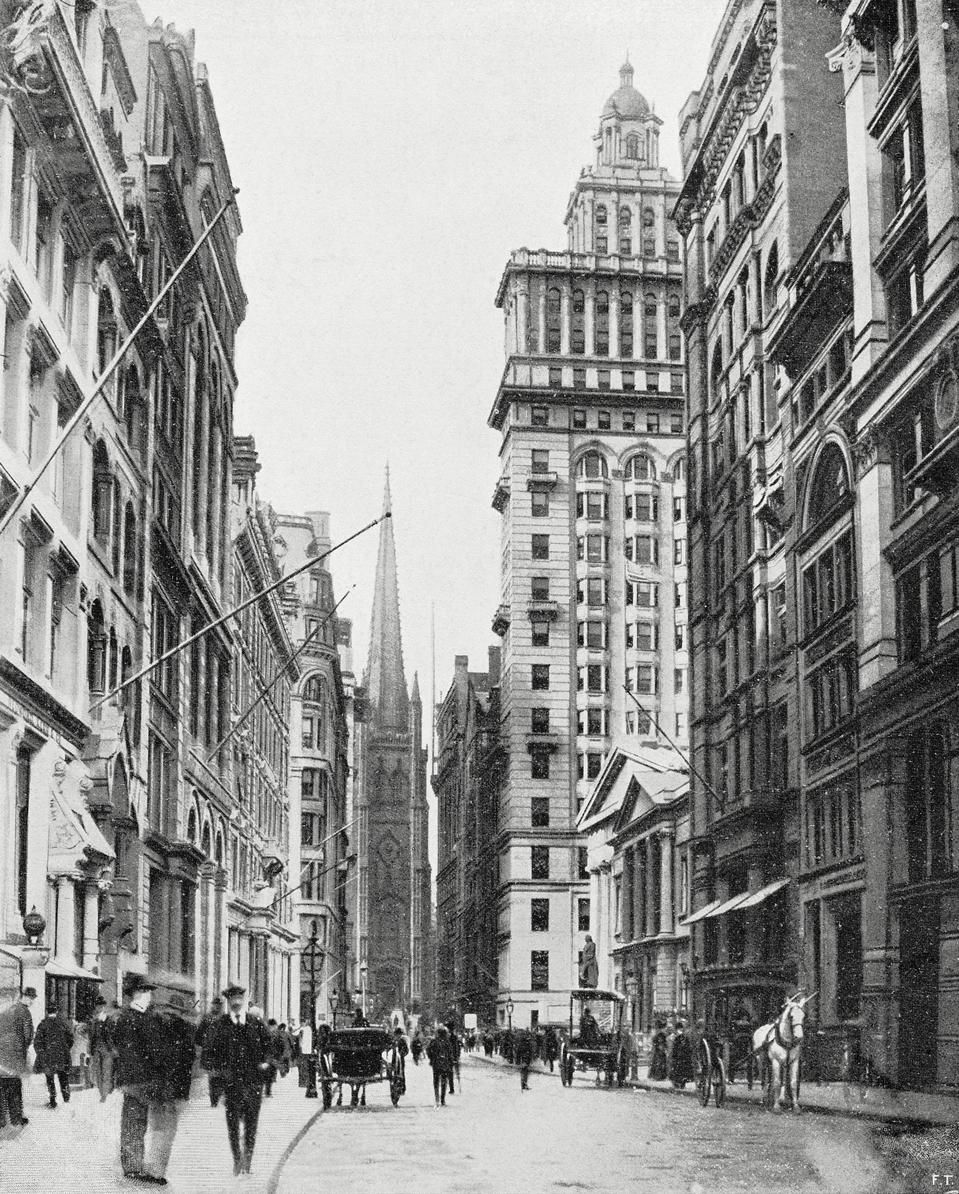 View of Wall Street in New York with the bell tower of Trinity church in the background (From … [+] L’Illustrazione Italiana – April 12, 1908)

Many investing analyses and outlooks are based upon today’s beliefs, built on short-term history – last year or since President Trump’s election or even the past decade. They are based on the belief that today’s wisdom is naturally better than yesterday’s.

Moreover, investing success depends on characteristics that are not received at birth: knowledge and common sense. That is where studying history comes in. Doing so gives us more than names, places and dates. It provides an understanding of the ebb and flow of human conditions and human reactions to them.

So, where to start? There are revelations and insights aplenty from older books and articles

When I started trading stocks in 1964, my relevant knowledge was one college course: Accounting I. At that time, data, reports, articles and advice came primarily from periodicals (including specialty items like charts and stock data), company reports, newsletters and brokerage firm publications. That is where I started my studying.

Then I began reading books, many of which were from the 1950s. I soon learned that while the current books could be exciting and “modern,” some older books offered more thoughtful insight into stock investing. 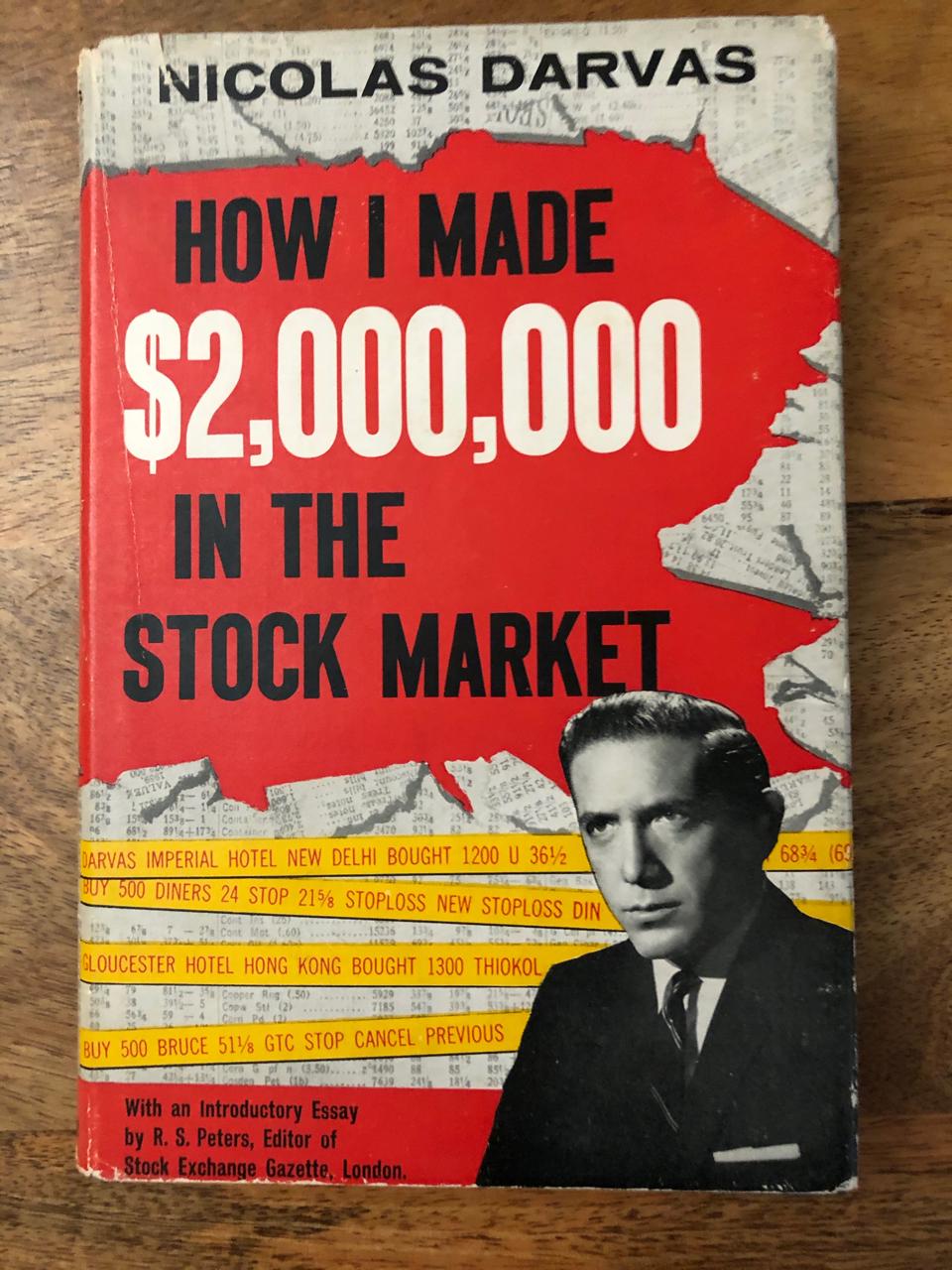 Older and insightful – I and many other investors view this book as their investment bible. Loeb’s chapters are selected pieces from his career at E.F. Hutton. 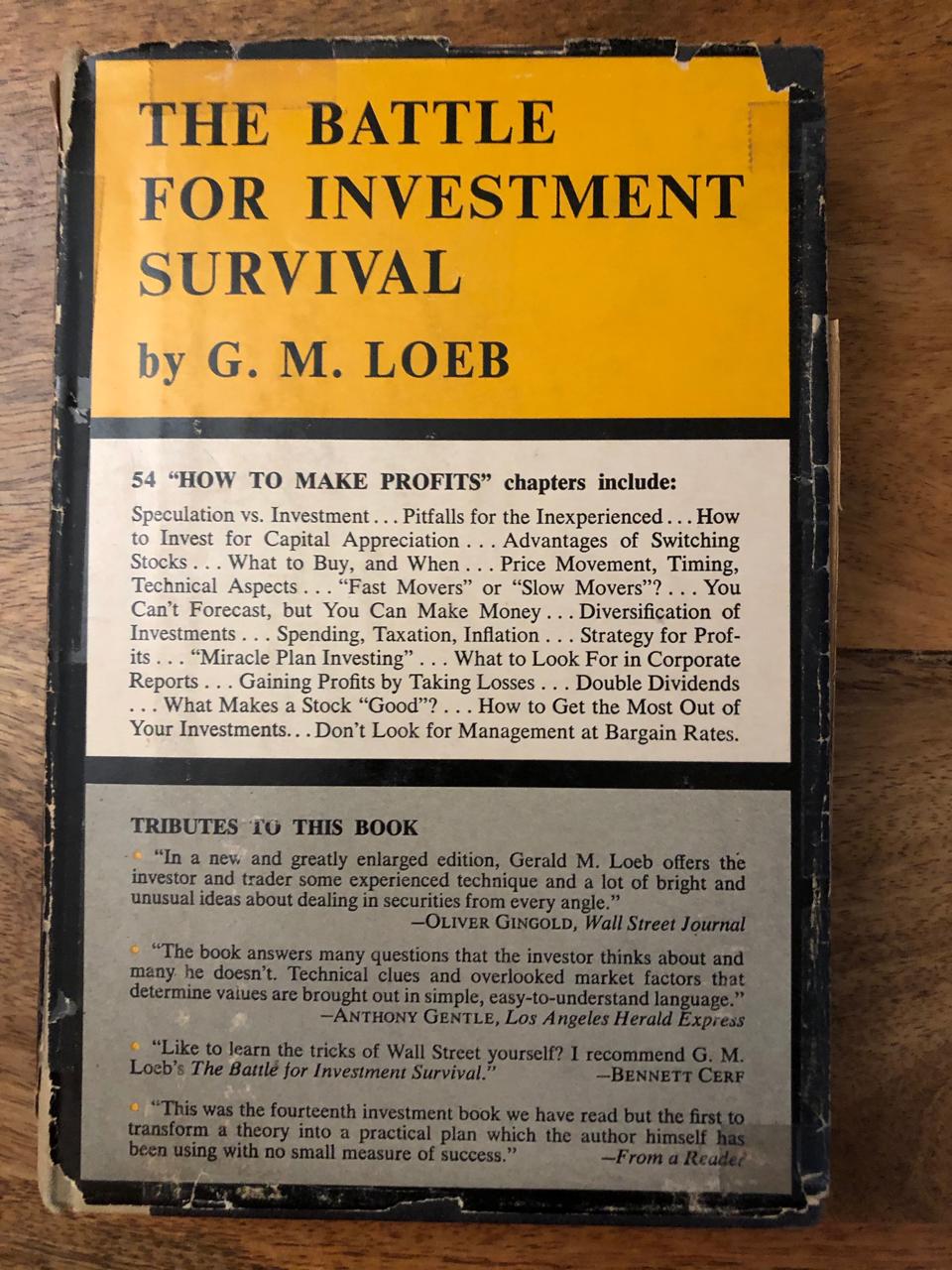 That was when I began building my library of investment books from all decades. I would haunt the used book stores looking for gems.

There was one purchase, in 1972, that stands out because of its fortuitous timeliness and importance to my career. My business school library was selling books that nobody had checked out for some time. Among them, for 10 cents, was a 1933 edition of an 1896, 68-page booklet: “Fiat Money Inflation in France.”

Outstanding – I consider it the best book about inflation. It is reprinted and rediscovered periodically. 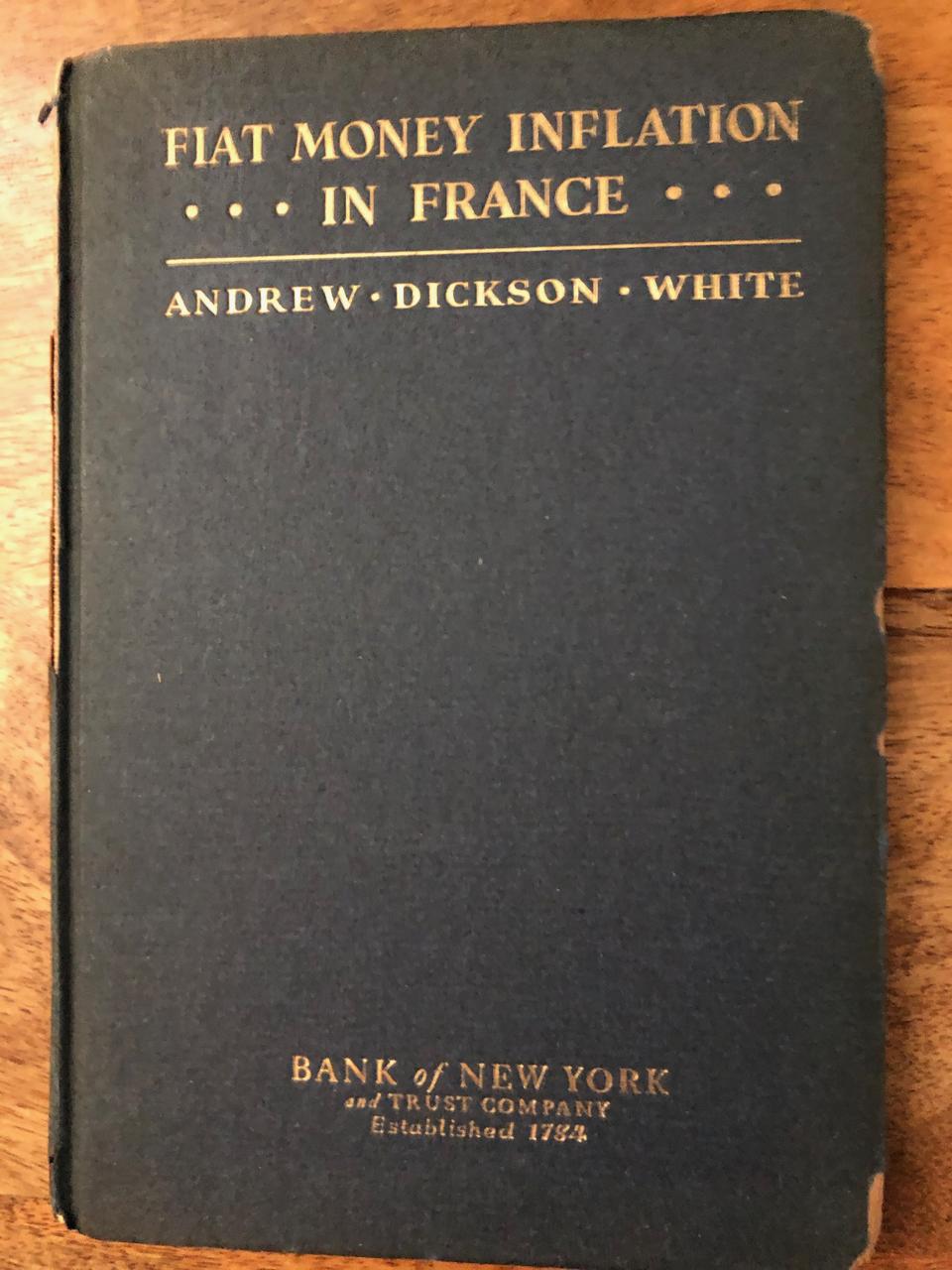 A valuable use for current books and articles

As my career developed, I started visiting bookstores to examine the popular titles with the idea of seeing what the popular themes were. I found the number of books and the titles’ level of excitement provided an excellent confirmation of trends, particularly when a fad or fear factor rose – or did not.

An example of the “did not” was in 1996 when Federal Reserve Chairman Alan Greenspan voiced his “irrational exuberance” concern about the stock market. The bookshelves revealed only rational interest, so all was well. It was not until late 1999 that the books revealed an over-optimistic, excited trend.

An example of today’s lack of historical perspective

Tesla, a current stock market darling, is placed on a too-high pedestal (underlining is mine):

“Tesla is now the most valuable US automaker ever” By Chris Isidore, CNN Business

Wall Street’s current love for Tesla (TSLA) has lifted its shares to a level never before achieved by a US automaker.

Tesla shares, which are up more than 160% since hitting a 52-week low last June, now have a market value of $86.5 billion. That gives the electric car-maker the distinction of being the most valuable US automaker in history.

This achievement easily tops the previous record high of $76.1 billion for shares of Ford in 1999, according to data from the Center for Research in Security Prices.

The high watermark for GM stock was more recent, when it reached a market value of $67.7 billion in October 2017.

Wrong. Tesla is actually far below the pinnacle that General Motors set – not in October 2017, but in October 1965. At that time, GM was the largest company in the world. The company’s position then is likely a record no automaker will ever beat. The unique, premiere status of GM was well described by Fortune Magazine in 1966 (see end of this article).

Chris Isidore’s reliance on only one measure -market capitalization- is a huge, amateurish mistake in judging the status of a company. Compounding the problem, he relies on the CRSP data. Those dollar numbers, unadjusted for inflation, simply cannot ever be used to determine “largest ever.”

Here are the proper comparisons:

Remember that those comparisons are only market capitalization valuations. He says nothing said about the actual companies, themselves. (That is another reason to read the Fortune article at this article’s end and compare its status then to Tesla’s now.)

Today’s flood of investment information contains a large amount of erroneous data, calculations and conclusions. Making matters worse is the myopic view of history being last year, or since President Trump was elected, or, for the “long-term view,” the last decade.

Cycles of varying lengths come and go in the economy and the markets. Founding investment thinking on just what happened in the last decade is a recipe for failure. Below are some of the issues that arise from understanding what can and has happened before the past decade.

Potential developments not seen since the Great Recession

Fortune’s write-up was included as an exhibit at this Senate hearing. Written in July 1966, it provides the picture of GM at its height in 1965… 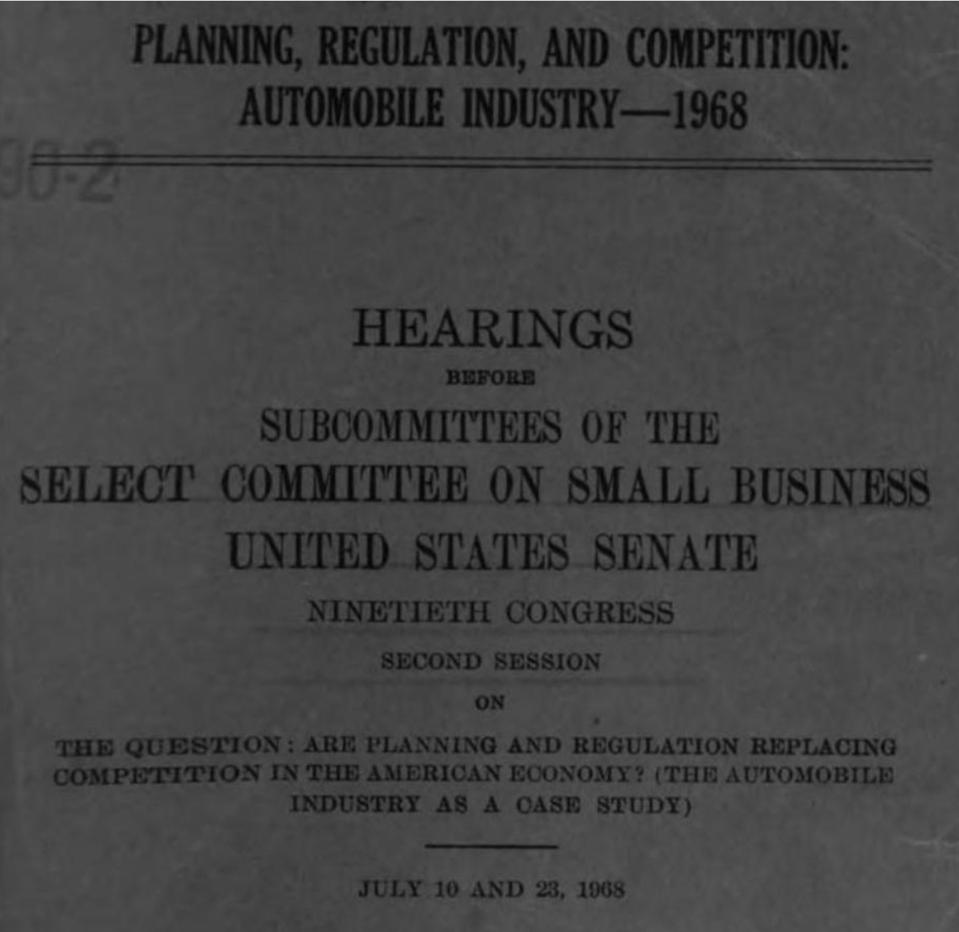 Booklet cover of U.S. Senate hearings regarding the automobile industry – 1968 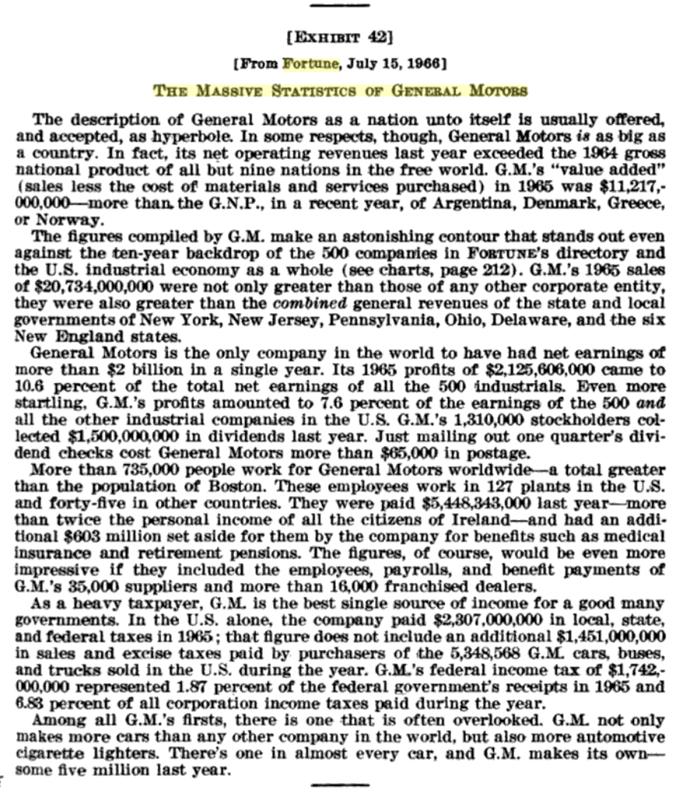 Palladium Surges Again But The Focus Will Soon Shift To Platinum