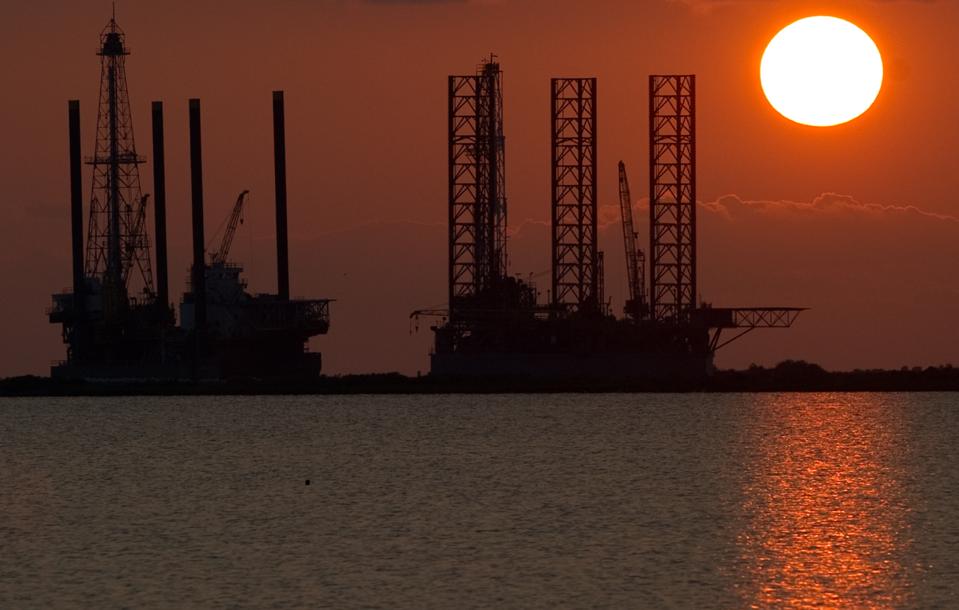 The sun sets behind two offshore oil platforms under construction in Port Fourchon, Louisiana. BP … [+] has pledged to slash its greenhouse gas emissions to net zero by 2050.

After BP announced yesterday that it would slash its greenhouse gas emissions to net zero by 2050, its share price rose 1%, a sign that investors no longer view ambitious climate change policies as anathema to the pursuit of profits.

Whether they maintain that optimism in the long haul is another question.

BP’s pledge to zero out emissions hinges on a number of factors over which it has little control, such as governments’ growing adoption of climate change regulations and continued rapid technological progress. It’s far from certain that either of these things will happen fast enough to make BP’s plans a financial success, let alone an environmental one. The dilemma illustrates the precarious balancing act energy companies face as they try to appease investors focused on both profitability and sustainability.

The London-listed firm’s pledge to reach net zero emissions by 2050 boils down to two key components. First, it will cut to net zero all greenhouse gas emissions that its own operations produce directly — for instance, the methane emitted by its oil refineries. It calls these Scope 1 emissions, and together they account for around 55 million tons of CO2 (or CO2 equivalent) per year.

The second part will be trickier. BP says it will cut to net zero all the emissions from the oil and gas it takes out of the ground — such as any oil which is refined into gasoline and burned in car engines, or any natural gas burned in gas plants to supply electricity to towns and cities. These are Scope 2 missions, and they add up to a far larger 415 million tons of CO2 equivalent.

BP hasn’t yet said how it will achieve net zero emissions for either category. The plan will almost certainly call for continued investment in alternative fuels technology — such as biofuels and electric car batteries — as well as for emissions-offsetting technology in the form of carbon capture and storage (CCS). But the specific strategies are still being worked out and won’t be revealed until September, according to David Nicholas, head of BP’s press team.

Regardless of what form its specific policies take, BP will almost certainly be banking on the growing assertiveness of the world’s governments on energy issues in their bid to tackle climate change and to respond to popular concerns about climate change. In his 2017 book Burnout, Oxford University energy economist Dieter Helm argues that oil prices have entered an era of terminal decline, driven in part by governments’ growing adoption of carbon regulations aimed at curbing the use of fossil fuels. The global spread of “carbon taxes” which are slowly squeezing coal-fired generation out of the energy mix, and which will eventually push gas-fired generation out, too, are an one example of this. Policies aimed at getting consumers to drive electric vehicles are another. This month, for example, the U.K. announced plans to ban the sale of petrol, diesel and hybrid vehicles by 2035.

If such policies come to fruition — and are accompanied by continued technological innovation — it is easy to see how BP’s pivot away from oil and gas could pay off. Its 2050 target decisively pivots away from the plans of American rivals ExxonMobil and Chevron, who have pledged only to reduce greenhouse gas emissions from their own operations, while making substantial new investments in oil and gas projects. A head start for BP now could, several years from now, translate it into incumbency in industries only now swelling in size, such as electric vehicles or solar energy.

But little is for certain in the energy world.

To limit the earth’s warming to no more than the 2 degrees Celsius called for in the 2015 Paris climate agreement, society needs to reduce its oil consumption to 67 million barrels a day by 2040, according to the International Energy Agency (IEA). Yet global oil consumption stands at around 100 million barrels a day currently and shows no signs of retreating. Even if governments were to enforce not only existing energy policies but to implement all the policies they’ve planned, the IEA says, global oil demand would still remain above 100 million barrels by 2040.

To limit global warming to no more than 2 degrees Celsius, the International Energy Agency (IEA) … [+] forecasts that the world needs to reduce emissions in line with the Sustainable Development Scenario. If the world implements only those policies already on the books as well as any policies which have been stated, emissions would actually still be higher in 2050 than today.

Since BP’s plan expects that it will actually pump less oil in coming decades, not more, it therefore risks forfeiting a huge share of the market in coming decades if the world fails to take action in line with the Paris agreement and continues pumping prodigious quantities of oil.

This could explain another part of BP’s pledge, which commits the company to advocating for policies to get greenhouse gas emissions to zero — “including carbon pricing; stopping corporate reputation advertising and redirecting resources to promote net zero policies, ideas, actions, collaborations and its own net zero ambition.”

If BP is to make a financial success of its plans, it knows it needs to bring the world with it.

What’s That Bright Star In The West? Why Dazzling Venus Is At Its Brilliant Best For Eight Years

Exclusive: On The Heels Of Cofounder Lawsuit, Modern...

Netflix’s ‘The Platform’ Review: The Perfect Parable For...

Want A More Creative Team? Help Them Be...