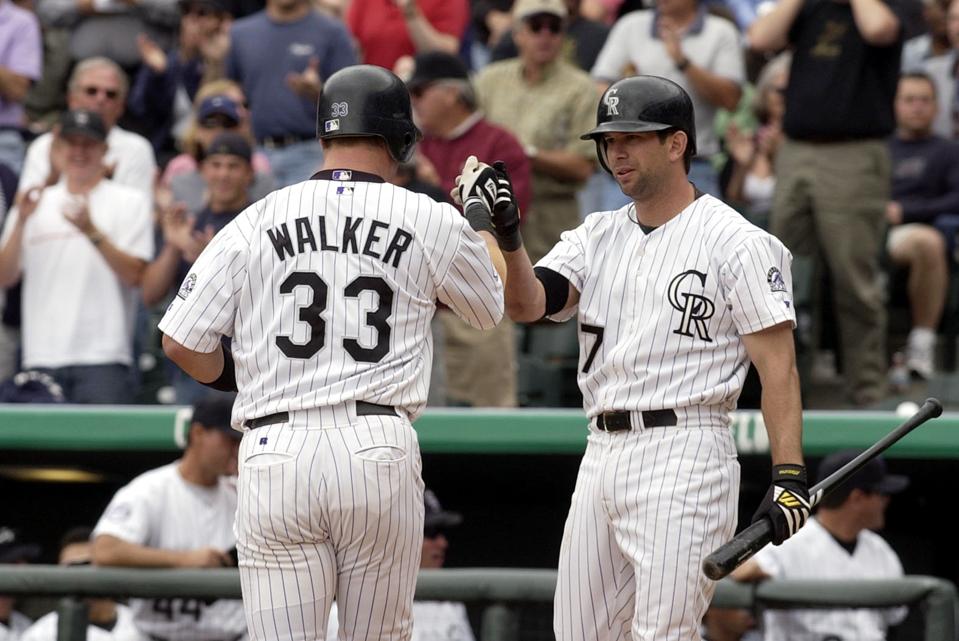 Both Larry Walker and Todd Helton were brilliant performers for the Colorado Rockies, excelling on … [+] defense as well as in other aspects of winning games. (The Denver Post/ Hyoung Chang) (Photo By Hyoung Chang/The Denver Post via Getty Images)

Like most topics in life, a difference of opinion is an absolute and that also holds true in baseball especially regarding the election of players into the Hall of Fame.

There is an obvious bone of contention concerning two players that deserve strong consideration for an invitation into Cooperstown . . . and the argument that arises when their names are mentioned for this great honor is the fact that they both played all or most of their careers for the Rockies, home of the Colorado air and the hitter friendly confines of Coors Field.

But make no mistake, not every player who has donned a Rockies uniform performed up to expectations, so the case can certainly be made that first baseman Todd Helton and right fielder Larry Walker should be given a fair assessment and be looked at for what they were—great MLB players.

Many contend his offensive numbers benefitted greatly with him playing half his games in Coors Field, but Helton’s career numbers were quite productive in other ballparks, as he hit .287 with 142 homers, 547 RBIs, and a .386 on-base percentage away from the Colorado atmosphere.

Great is an accurate statement for Helton, especially his first 10 years in the league. He was a defensive standout as a first baseman, winning three Gold Glove Awards and ranking among the all-time career leaders in putouts, assists, double plays, total chances, and fielding percentage, while ranking high in Total Fielding Runs Above Average and in Defensive Runs Saved.

There is no question Helton’s offensive production during his career was outstanding and his defensive was superb, making him an elite MLB performer during his era for an extended stretch.

The imprint he left in the game merits a vote for Hall of Fame election.

As with Helton, Larry Walker enjoyed his best seasons in Colorado but had a tremendous career that began in Montreal with the Expos and ended in St. Louis with the Cardinals.

He was a great all-around player whose numbers would have been more outstanding had he not missed more than 300 games due to various injuries. Walker is among a limited number of players who ended a long active career with a .300 batting average (.313), .400 on-base percentage (.400), and .500 slugging percentage (.565).

When healthy, he was an electrifying player. He’d stand there coiled at the plate and suddenly rip a pitch out of the park or into the gap and the ball would be crushing against or sailing over the wall almost before the pitcher had a chance to look around and groan at the speed with which it left his bat.

“Larry Walker is the most complete player in the National League,” Hall of Famer Tony Gwynn once said. “People may overlook him because he plays in Colorado, but Walker can do it all, at the plate, in the field, and on the bases.”

A left-handed power slugger, who hit the ball to all fields, he captured three N.L. batting titles and hit a robust .357 with two home runs in his only World Series appearance.

Walker is one of 25 major league players, since 1900, to win three or more league hitting championships . . . and among those batters, Walker (3), Bill Madlock (4), Tony Oliva (3), and Pete Rose (3) are the only eligible for election players not voted into the Hall of Fame.

Walker had his detractors through the years, people who complained about his numbers at Coors Field vs. his totals in visiting ballparks and his long list of injuries, but there’s no denying on the field, he was something extra special.

Standing Up For Human Rights For Everyone