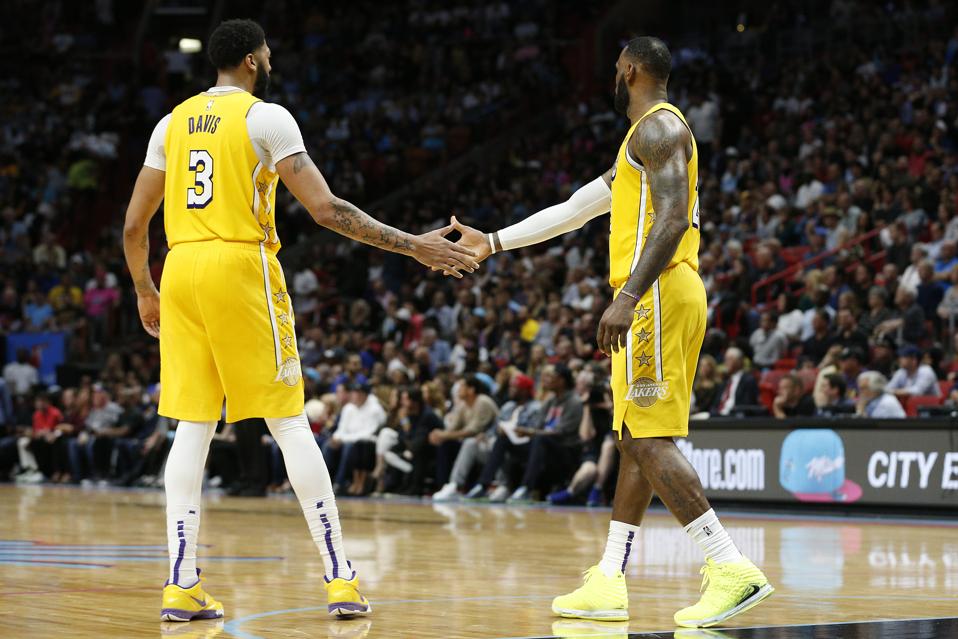 MIAMI, FLORIDA – DECEMBER 13: LeBron James #23 of the Los Angeles Lakers celebrates with Anthony … [+] Davis #3 during the second half at American Airlines Arena on December 13, 2019 in Miami, Florida. NOTE TO USER: User expressly acknowledges and agrees that, by downloading and/or using this photograph, user is consenting to the terms and conditions of the Getty Images License Agreement (Photo by Michael Reaves/Getty Images)

If Knicks fans want to dream big during this holiday season, Anthony Davis threw out a kernel of hope this week.

Davis this week said both that he plans to enter free agency in the summer of 2020 and that the Knicks were on his trade list when he wanted out of New Orleans.

“Every team was on my list at the time, and then I kind of cut it down, and they were one of the ones that made the final cut,” Davis, who has a $28.8 million player option for the 2020-21 season, said on the Boomer and Gio radio show on Wednesday.

In February, Davis listed the Knicks along with the Lakers, Celtics and Bucks as those on his preferred list. He later expanded it to every team in the league.

As for what attracted him to the Knicks, he said on Boomer and Gio:

“I talked to some guys over there who were still there, and I feel like playing for an organization like that, especially New York, it’d be something that I was always interested in. You see ‘Melo was there and the history that the Knicks have and a historical franchise it is, I thought it was something I could definitely be a part of.”

The Knicks missed out in free agency on Kevin Durant and Kyrie Irving, with Durant later saying the Knicks were “not as cool” as franchises like the Lakers and Warriors.

Davis, LeBron James and the Lakers could not be much cooler right now. They currently own the NBA’s best record at 24-4 and are the favorites to win the NBA championship. The Lakers and rival Clippers are headed towards a monster showdown on Christmas Day.

Davis is averaging 27.4 points and 9.3 rebounds and thriving alongside James. It’s not hard to imagine them continuing to team up for years to come in pursuit of NBA titles if they both opt to remain with the Lakers.

“Obviously, the season’s going great so far and I’m trying to stay in the moment and worry about that [free agency] when the season’s over,” he said Wednesday on ESPN’s “First Take.” “But I feel like we can do something special this year. With the team that we put together and the coaching staff that we have, I don’t feel like no one can beat us but the Los Angeles Lakers.

“But when that time comes I’ll think about it and see what’s going on. But right now I’m trying to focus and win a championship with the Los Angeles Lakers.”

As for the Knicks (7-21), they are clearly a long shot to land Davis, who is focused on winning at this stage of his career.

The Knicks have hardly been synonymous with winning in recent years. The franchise has won one playoff series since 2001 and hasn’t won an NBA title since 1973.

David Fizdale was fired as head coach after a 4-18 start and replaced by interim coach Mike Miller. President Steve Mills is now on the hot seat under owner Jim Dolan, and the Knicks are reportedly targeting Toronto’s Masai Ujiri to run their basketball operations. Ujiri is under contract in Toronto through 2021, and the Knicks would have to give up multiple draft picks in order to have a shot at getting him.