Skeletal evidence of crucifixion, a practice the Romans used for centuries as punishment, is exceedingly rare. Five years ago, there was only one bone that experts agreed was likely from a crucified person, who was buried in Israel. Now, a second bone from northern Italy is at the center of a new Smithsonian Channel documentary on ancient crucifixion airing tonight.

The first example of possible crucifixion comes from 1968, when excavations in a cemetery in Giv’at ha-Mivtar just outside of Jerusalem revealed a calcaneus or heel bone with a nail still piercing it. The tomb lists a man’s name – Yehohanon ben Hagkol – but otherwise nothing about him is known. Based on the nail through the bone, archaeologist Vassilios Tzaferis concluded that Yehohanon had been crucified. 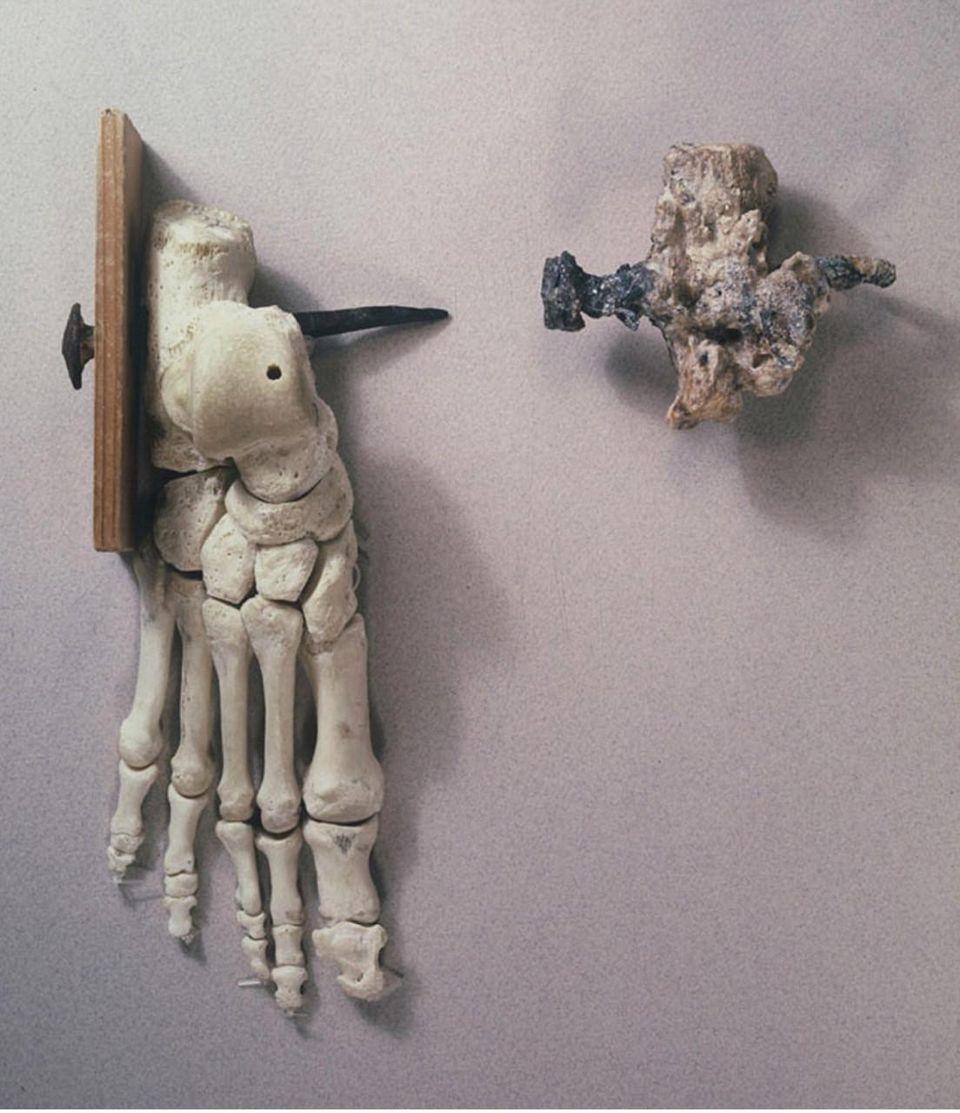 Right: The calcaneus of Yehohanon ben Hagkol, with transfixed nail. Left: A reconstruction of what … [+] the foot may have looked like around the time of death.

While the method of Yehohanon’s demise has been debated, for 50 years his heel bone was the only clear skeletal evidence of the practice. Numerous reasons explain why archaeologists haven’t found copious examples of crucifixion: its victims were usually criminals, who likely weren’t buried in cemeteries; crucifixion nails were seen as magical or medicinal, so may have been removed from most victims; and most crucifixions involved reusable ropes rather than expensive nails, and inflicted only soft tissue injuries.

But a second example has been published in the journal Archaeological and Anthropological Sciences. Accidentally uncovered during preventative archaeological work ahead of a planned pipeline about 75km outside of Venice, Italy, the isolated skeleton – a man in his 30s – was laid to rest without any grave goods. 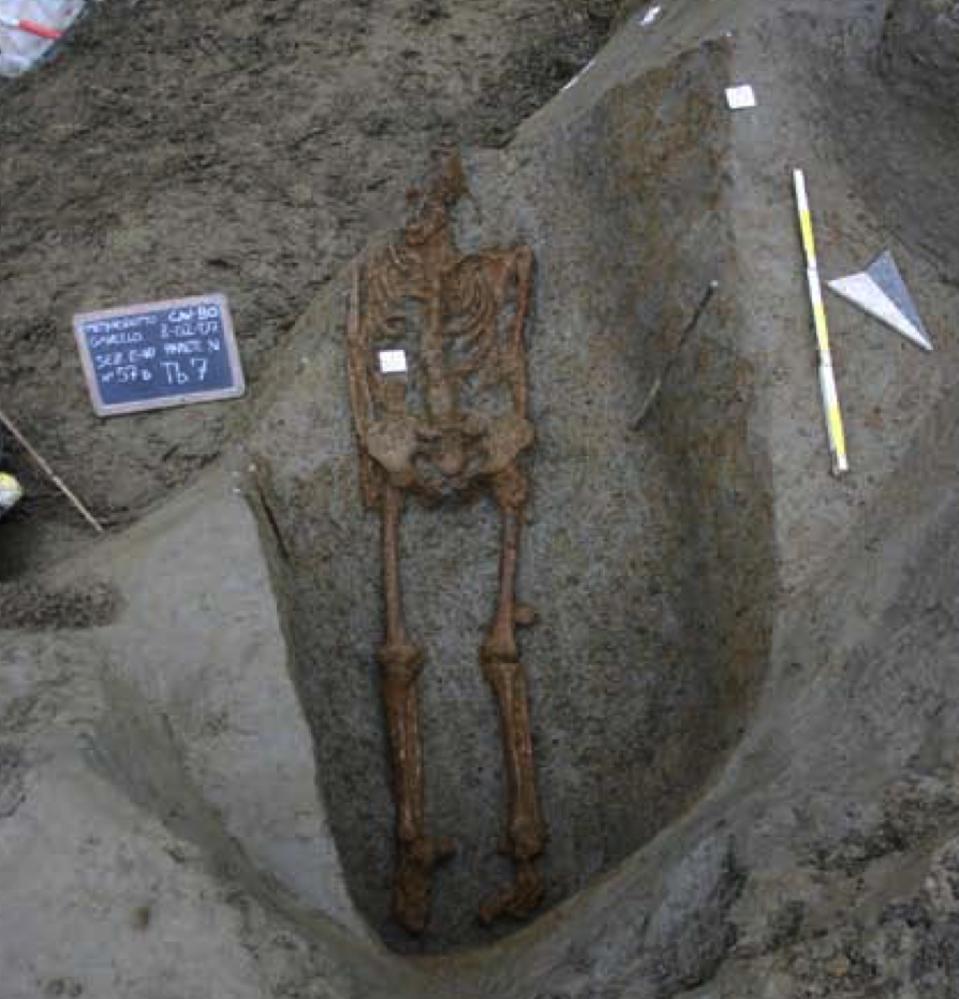 Grave of the man from Gavello during excavation by the provincial archaeological superintendency.

Although the skeleton was not well preserved, the research team – consisting of Emanuela Gualdi-Russo, Ursula Thun Hohenstein, and Nicoletta Onisto from the University of Ferrara and Elena Pilli and David Caramelli from the University of Florence – was able to extract DNA and to rule out an accidental origin for a hole in the calcaneus.

The hole itself is round, passing from the inside of the foot to the outside, and there is evidence that it was inflicted around the time of death. “In our interpretation,” the archaeologists write, “the type of lesion found on the right calcaneus from Gavello is compatible with a position of the body […] contorted to the right with legs and feet in contact to allow a single nail to pierce both heels, [or with] knees in an open position and feet with heels overlapping and fixed on the medial side by a single nail.”

Just as at Giv’at ha-Mivtar, the Gavello skeleton reveals a puncture wound caused almost certainly by a nail through the heel bone. Unlike the Jerusalem example, though, the man from Gavello was not buried in a proper family tomb. “Isolation of the burial site,” the researchers explain, “may have been a consequence of the community’s refusal of the individual in death as in life.”

A new documentary airing tonight on the Smithsonian Channel titled “Crucifixion Mystery” investigates these two skeletal examples of crucifixion within the historical background of the Roman Empire, and also interviews experts – including me – on how the mechanisms of this punishment caused a person’s death. Dr. Per Lav Madsen, a Danish cardiologist, has been running experiments to show that, after just an hour of being forced into a standing position, unable to move the legs, a person can faint or otherwise lose consciousness. And I describe how a lack of water leads to dehydration and eventually to failure of various bodily systems, causing death. There were ways to hasten death – such as through crurifragium, or breaking the legs – but crucifixion was actually designed to be a slow, painful demise.

The fact that archaeologists have only found two bones that show clear evidence of crucifixion, two millennia after the Romans used it on thousands of victims, means that we will likely never fully understand the extent to which the punishment was used, whom it was used on, or how they met their ends. But given the advances in archaeological research even since the Giv’at ha-Mivtar skeleton was found, both bones demonstrate just how much we stand to learn when this incredibly rare evidence is found.

Beyond ‘Decoupling’: How China Will Reshape Global Trade...