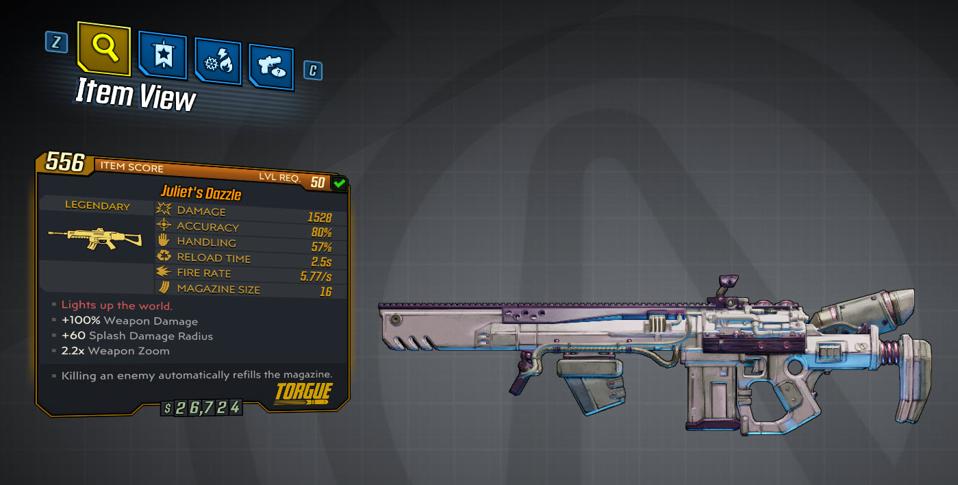 Borderlands 3 has come out with yet another SHiFT code, yet this one is not for a golden key, but instead a guarantee legendary Assault Rifle, which is something you don’t see happen every day. This is Borderlands celebrating “Mercenary Day” which I think is some sort of Christmas-adjacent in-game holiday thing, though there’s no in-game event that I can see other than some code for free stuff every so often. Rather, the big Borderlands 3 thing happening soon is the launch of the Mad Moxxi DLC next week on December 19.

Here’s the SHiFT Code that you can redeem for the gun right here. It will be in your email, not the chest on the ship or anything:

This does not expire until January 10. There’s also a bonus one for an Echo skin that went up yesterday:

The rifle is the Juliet’s Dazzle, which I believe was just added in the game’s recent Maliwan Takedown update, so it’s fairly new and you may not have it yet. I didn’t.

Normally you can farm this thing from either the Takedown bosses or Aurelia Hammerlock. Its special perk is that it shoots out bouncing, glittery bullets, and I believe it refills its own magazine when you kill something with it.

I just got mine and tested it out in Mayhem 4 in a boss fight from a certain DLC I may or may not have early access to. It hits pretty hard. I’m not sure if everyone gets the exact same version from their email, or if you can roll a better one. Mine is non-elemental, non-anointed, but has a flat 100% bonus weapon damage which seems pretty solid. I was using it with my Amara but I think it would probably be better on Zane or Moze who are less reliant on elements to do damage.

Gearbox is going to keep giving out little treats like this as we march toward Christmas, so keep an eye out for more gifts like this one, including what I assume will be some golden keys ahead of the launch of the Mad Moxxi DLC.

There is more to come and Mad Moxxi will dump a whole bunch of new loot in the game soon, so it’s the season to start playing more Borderlands, if you ever actually stopped since launch.

Rutgers Basketball Now Has A Game-Changer In Facilities Race