Here’s How The Coronavirus Stimulus Checks Will Be Cut 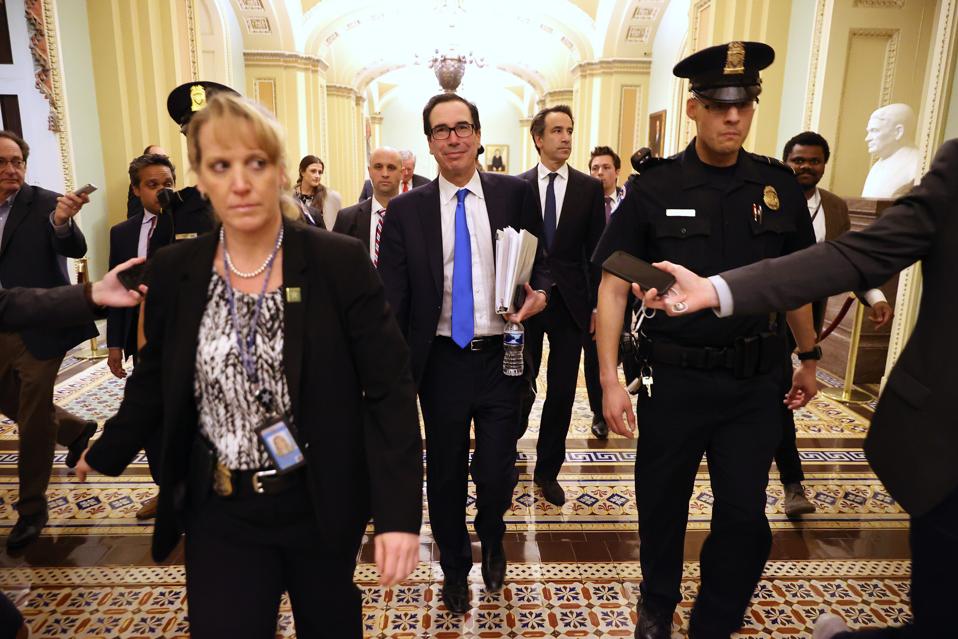 WASHINGTON, DC – MARCH 24: Treasury Secretary Steven Mnuchin (C) leaves the offices of Minority … [+] Leader Charles Schumer (D-NY) as negotiations continue into the night on a $2 trillion economic stimulus in response to the coronavirus pandemic at the U.S. Capitol March 24, 2020 in Washington, DC. After days of tense negotiations — and Democrats twice blocking the nearly $2 trillion package — the Senate and Treasury Department appear to have reached important compromises on legislation to shore up the economy during the COVID-19 pandemic. (Photo by Chip Somodevilla/Getty Images)

Topline: The Senate passed the largest spending bill in its history late Wednesday night after six days of back and forth — a $2 trillion package that injects financial aid into all parts of the American economy — with one of the core tenets of the aid package direct cash payments to working Americans and here’s how that will work:

What to watch for: How soon you will get your check. The Trump administration is hoping to get the checks out within two weeks of the bill becoming law. However, it could take longer. In 2008, when Congress also sent money to Americans, it took two months for the checks to arrive. CNN reports it will “likely” take until May before checks are sent out.

The House isn’t expected to vote on the bill until Friday.

Surprising fact: People who receive Social Security as their only source of income would still receive the direct cash payments under the Senate bill, according to Axios.

“It was a striking populist turn for a party that has been dominated for decades by small-government activists, including some who rose to political prominence in the wake of the Wall Street bailout and are now determined to steer federal help to the most vulnerable of their constituents,” writes Huse about Republicans backing direct cash payments.

Chief Critic: Former Democratic presidential candidate Andrew Yang made universal basic income — direct cash payments from the government to citizens — a key pillar of his campaign. He told The Guardian on Friday that he doesn’t think $1000 in cash payments during the coronavirus pandemic is enough: “A thousand dollars per person should be the baseline.”

“I think we should be looking at trillions of dollars of stimulus and the lion’s share of that should go to people,” he added.

Key background: This $1,200 per person number in the GOP bill doesn’t come out of thin air. One week’s pay for a typical full-time working American is $936, according to Labor Department data, as reported by the Washington Post.

Still, the New York senator added that he believed the $2 trillion stimulus bill “probably” wasn’t enough to protect workers and save the economy.

Behind The Scenes Of The Stance Spades Tournament...

On CRM: LinkedIn Takes Another Big Step Towards...