Home Business How China’s Measures Have Worked Against Coronavirus, What 2 Studies Showed
Business

How China’s Measures Have Worked Against Coronavirus, What 2 Studies Showed 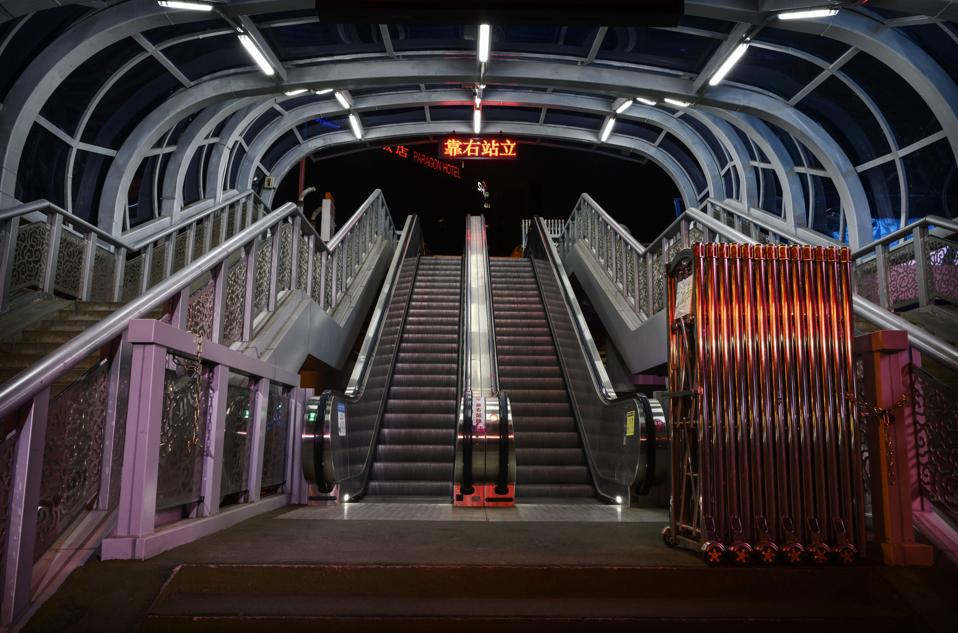 The empty escalators outside the usually busy Beijing Station metro is seen during the rush hours on … [+] March 14, 2020 in Beijing, China. In Beijing, the normally bustling capital, daily life has fallen into a rhythm of social distancing that is widely accepted as the new norm after two months of restrictions to stop coronavirus from spreading. Millions of people are still working from home, schools and entertainment venues remain closed, and even commutes on some public transit need to be pre-booked to control crowds. (Photo by Kevin Frayer/Getty Images)

This deserves a “wooo” not just for Wuhan, China, but also for the rest of the world. After all, without a vaccine or specific treatment available against SARS-CoV2, social distancing is about the only thing available to slow the spread of this nasty virus. Social distancing includes different ways to keep people physically apart from each other, such as shutting down “high-mixing” places such as schools and workplaces and having people stay at home as much as possible. It makes sense that maintaining physical separation will prevent the virus from transmitting from one person to another because the virus doesn’t have little legs to run or a little Tesla to drive after you. Nonetheless, seeing scientific evidence that social distancing works can be encouraging, especially when you’re stuck at home alone playing your 5000th game of checkers with your cat.

Some of this evidence comes from a study just published in the journal Science. For this study, a team of researchers analyzed data on the movement of people and the reported COVID-19 cases over time in China. The human mobility data came from Baidu Inc., a Beijing-headquartered tech company that produces all kinds of Internet-related services and products, you know the kind of stuff that can track where people go. If you recall, the new coronavirus outbreak first started in Wuhan, China, sometime in the middle of December 2019, which now feels like ages ago.

The following tweet shows a set of figures from the publication:

The graph labelled “a” shows human mobility levels for January 2019 (the gray line) and January 2020 (the red line). As you can see, human movement began plummeting after January 23, 2020, the day that cordon sanitaire was established for Wuhan. Cordon sanitaire is not a meat and cheese dish eaten in a sanitary napkin but instead is a public health measure that aims to control the spread of an infectious disease. It involves establishing a no-travel zone and then restricting people from traveling inside and outside this zone. This and other social distancing measures such as school and workplace closures and stay-at-home orders correlated with a precipitous fall in movement until a new low plateau was established after January 26.

The research team then estimated where new SARS-CoV2 infections in China occurred over time, seen in Figure c in the tweet. Since only reported case data was available and trumpets don’t play whenever someone gets newly infected, the researchers had to back-estimate when the infection for each reported case had actually occurred. This entailed incorporating the observation that on average it takes 5.1 days for someone to develop symptoms after initial infection. They also used estimates of how long it takes for someone with symptoms to eventually be diagnosed and reported as having COVID-19. This was an average of 6.5 days before January 23 and 4.8 days after that date when China implemented more active surveillance. 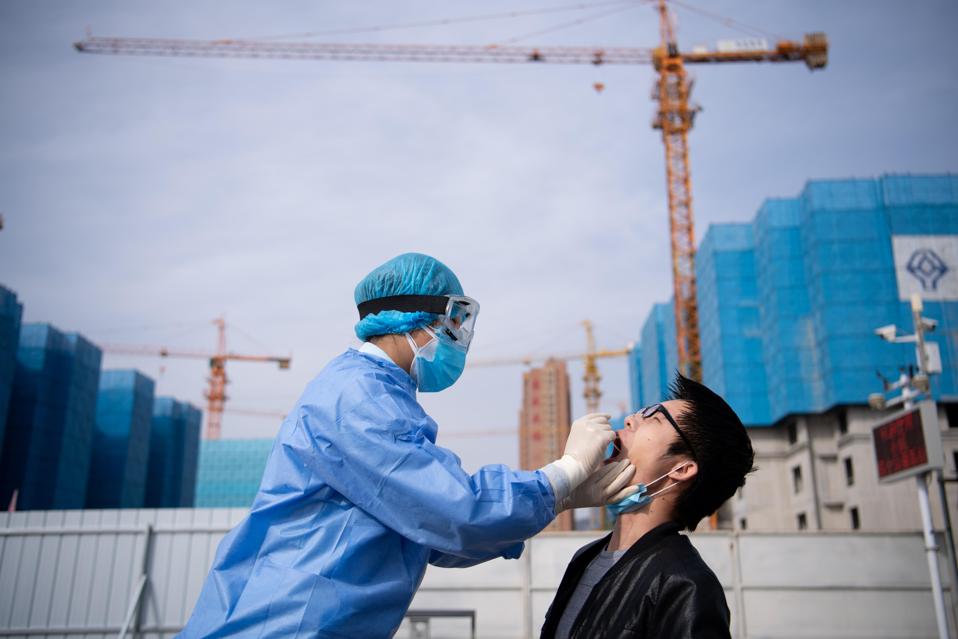 A medical worker wearing a protective suit collects sample from a migrant worker for a nucleic acid … [+] test for the COVID-19 coronavirus at a construction site amid the coronavirus outbreak on March 13, 2020 in Taiyuan, Shanxi Province of China. (Photo by Wei Liang/China News Service via Getty Images)

Did decreased human movement correlate with a decrease in new infections? In a word, yes. In two words, heck yes. The authors of the study reported that until February 10 the total number of cases outside of Wuhan correlated “remarkably well” with the movement of people out of Wuhan. That means that the provinces that had the largest outbreaks also had the most people that traveled there from Wuhan. The strong association between new infections and the movement of people held even when the researchers factored in increases in testing.

Well, if you need more evidence, look at a second study published in Lancet Public Health. For this study, a different research team utilized data on the population of Wuhan, China, and the number of reported COVID-19 cases in the city over time to create a mathematical model. They then used this model to simulate the closures of schools and workplaces that occurred in the city around mid-January 2020 initially due to Lunar New Year and what would happen if these closures were maintained for different lengths of time. The simulation experiments suggested that if the closures had only lasted through the Lunar New Year holidays, there would have been little effect on the spread of the COVID-19 coronavirus. But the extended closures that have been maintained since have helped substantially decrease the number of new infections. They also found that if these social distancing measures were to remain fully in place until April, they could reduce the median number of infections by 92% as of mid-2020 and 24% as of the end of 2020. By contrast, re-opening schools and workplaces earlier in March instead could then lead to a new surge in cases.

What’s encouraging about the findings from both of these studies is that something can be done to stop the spread of SARS-CoV2. China is not the only country that has been able to change the course of COVID-19 coronavirus with aggressive social distancing. South Korea and Singapore have also been able to “flatten the curve,” meaning change the shape of the epidemic curve that plots number of cases per day. Just compare what’s happened in these countries with what’s happened in Italy.

These experiences do provide a template for the U.S. and other countries to follow. However, the big question is whether Americans will indeed follow this template in the same way and more aggressively implement social distancing. It may not seem promising with scenes such as this: 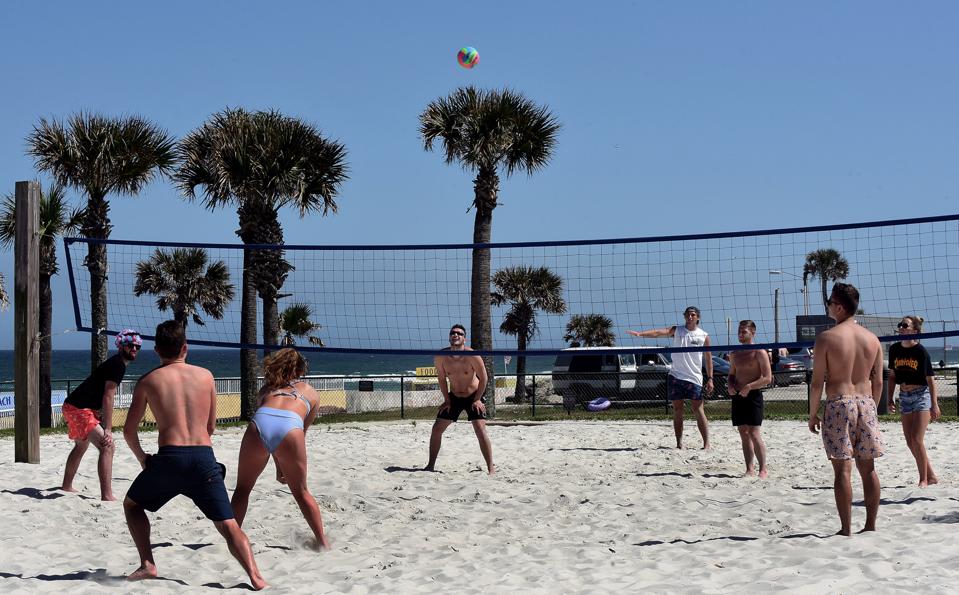 Spring breakers play volleyball during a spring break at Daytona Beach after Florida Governor Ron … [+] DeSantis refused to order the state’s beaches closed as the number of COVID-19 cases increases across the state. (Photo by Paul Hennessy/SOPA Images/LightRocket via Getty Images)

And people already calling to “re-open America” even though social distancing measures have not even been in place throughout the country for long. The U.S. is certainly behind the curve in trying to “flatten the curve,” because social distancing measures haven’t been implemented as early and as aggressively as they were in South Korea and Singapore. Nevertheless, China was behind the curve by January 23, but managed to get on top of the curve within a couple weeks with very aggressive social distancing. This suggests that there is still a window of time for the U.S. to make a positive difference. But keep in mind that the window is closing fast.

This Shampoo Is Made From Powder, And Here’s...