Home Business How Do Robert Saleh, Brian Daboll And Jim Schwartz Fit With The Browns?
Business

How Do Robert Saleh, Brian Daboll And Jim Schwartz Fit With The Browns? 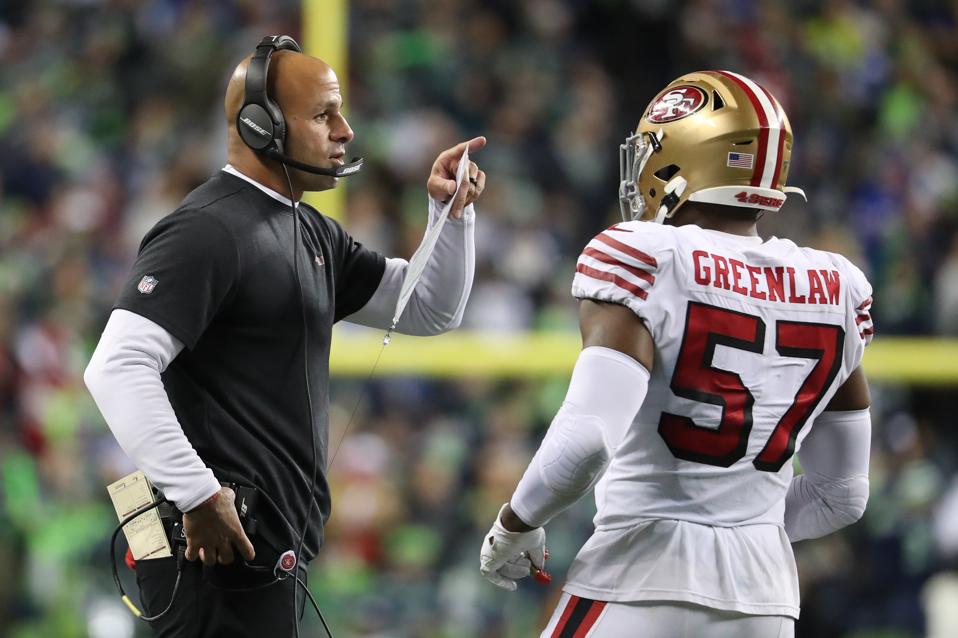 SEATTLE, WASHINGTON – DECEMBER 29: San Francisco 49ers Defensive Coordinator Robert Saleh has a … [+] conversation with Dre Greenlaw #57 of the San Francisco 49ers in the fourth quarter against the Seattle Seahawks during their game at CenturyLink Field on December 29, 2019 in Seattle, Washington. (Photo by Abbie Parr/Getty Images)

Saleh interviewed with the Browns on Sunday and reportedly impressed the Haslams. He’s been coaching since 2002 and coaching in the NFL since 2005.

Saleh’s defensive background also suggests his teachings are grounded in discipline, which the Browns desperately need. The Browns still finished fourth in net penalty yards despite cutting back on penalties the second half of last season.

The problem with choosing a defensive-minded coach, though, is the flux it could bring to the offense. If an offensive coordinator performs well, he becomes a hot head-coaching name.

Out of the 32 offensive coordinators, only three — New England’s Josh McDaniels, New Orleans’ Pete Carmichael and San Francisco’s Kyle Shanahan — have been with their current team since before 2018. Shanahan doubles as his team’s head coach, and McDaniels might leave his post soon.

That degree of turnover is an issue for Baker Mayfield, who has already played for three offensive coordinators in two seasons. Helping him find his 2018 form has to be near the top of the Browns’ priorities this offseason.

That being said, the coordinator conundrum shouldn’t discourage the Browns from hiring Saleh if they think he’s the best candidate. It’s just something to consider.

Daboll’s interview with the Browns on Monday was a homecoming of sorts. Daboll served as the Browns offensive coordinator for the Browns back in 2009 and 2010.

The results were bad — the Browns finished with the worst offense in the league in 2009 and the fourth worst in 2010 — but so were the players (Brady Quinn at quarterback in 2009, Colt McCoy in 2010).

The Browns years set the trend for Daboll’s career. In 2011, he was the offensive coordinator for the Matt Moore-led Dolphins (22nd-ranked offense). Then he linked up with Matt Cassel in Kansas City (24th-ranked offense) in 2012.

And finally, after spending four years as an assistant on the Patriots’ staff and one co-coordinating Alabama’s offense, he was hired by the Bills to work with Josh Allen in 2018. In two seasons, the Bills offense ranked 32nd and 24th in the league.

At each stop, Daboll compensated for his quarterbacks by relying on his run game. His offenses ranked in the top 10 in rushing yards and attempts in every season Daboll worked as offensive coordinator, but only the ’12 Chiefs cracked the top 10 in yards per carry (shoutout Jamaal Charles).

He deserves credit for accentuating Allen’s strengths (his athleticism, mainly) this season, and he might be able to do the same with Baker Mayfield. Daboll’s run-heavy scheme would fit well with Nick Chubb and (maybe) Kareem Hunt.

But the Bills were led by their defense, and it’s hard to learn much about Daboll from his past. The Browns might be looking for more certainty from their candidate.

Adam Schefter reported late Monday that the Browns requested to interview Schwartz, who spent this season as the Eagles’ defensive coordinator.

With the Cowboys hiring Mike McCarthy, Schwartz has more NFL head-coaching experience than any candidate the Browns have interviewed or plan to interview as of Monday night.

It was, however, a mostly negative experience.

During Schwartz’s tenure from 2009-2013, the Lions went 29-51. In their one winning season under Schwartz, they lost in the first round of the playoffs.

Since then, he’s rebuilt his reputation as the defensive coordinator of the Bills and Eagles. He won a Super Bowl with Philadelphia in 2017, and the Eagles defense ranked top five in defensive DVOA (Defense-adjusted Value Over Average) twice during Schwart’s tenure. It never dipped below league average.

That being said, Schwartz’s defensive background yields the same coordinator issues that Saleh’s does. Plus, how much does previous experience matter if Schwartz failed as a coach the first time?

Schwartz might earn another head-coaching chance soon, but I’d be surprised if he earned it with the Browns.

Want To Be A Great Leader? How Cooperation,...

Iowa Caucus Failure Is Another Example Of Why...