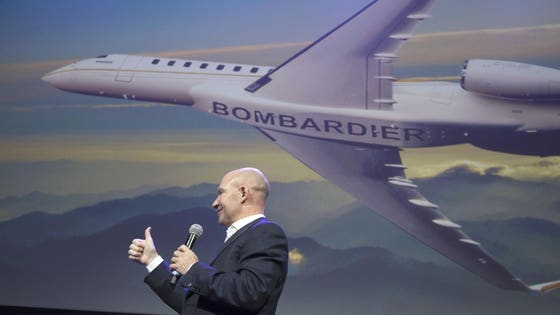 Bombardier intends to sell its rail unit to Alstom, and expects proceeds of at least $4.2 billion that would help reduce its crushing debt load. In doing so, the company is putting all of its remaining chips down on the last man standing business jet division, which would become the only pure-play in the industry.

History does not offer reassurances for this strategy. The business jet industry can be extremely cyclical, which makes for some very rewarding highs followed by bone-crushing lows. While no one is predicting an economic downturn to the degree of the previous financial crisis, that event winnowed worldwide business jet deliveries from over 1,300 units a year to less than 700, causing some manufacturers to slash their workforce by half.

Other pure-play general aviation manufacturers have had a checkered past. Propeller airplane companies like Piper and others have been on the ropes at one time or another, and Mooney just shut its doors — again. After much initial fanfare, entry-level business jet maker Eclipse Aviation defaulted a few years ago, leaving investors in the lurch.

All of today’s primary business jet manufacturers are diversified, usually with some military business in addition to civil. Often the two are counter-cyclical, with firm-contract military contracts floating the civil side in bad times and vice-versa.

Being diversified is not always a guarantee of success. Heavily leveraged by a private equity purchase, once robust Hawker Beechcraft lost the battle when the economy soured and business jet backlogs and orders evaporated. It was later picked up by Textron and integrated into its aviation unit.

Fortunately for Bombardier, it’s left with a very viable business jet concern. The brand is well known and respected. In 2018 it was second in delivery units and value just behind Cessna and Gulfstream respectively. Its aircraft backlog and the sales pipeline are both admirable, and its top-of-the line Global series is fresh, popular and poised for outsized margins.

Once the dust settles from all of the divestiture activity the company will surely focus more attention on a longer-term strategy to iron out the inevitable ups and downs. While it’s unlikely it will risk capital to make acquisitions any time soon, there could be attractive military affiliations. For example, the Gulfstream grab a number of years back by General Dynamics played out well and could be emulated by others such as Lockheed Martin or Northrop Grumman.

For now, the economy is decent and business jet sales keep coming albeit at a reserved yet sustainable level. The biggest unknown is just how the company will weather the next swoon with all of its eggs in one basket.

Pallas Is So Heavily-Cratered That It Resembles An...