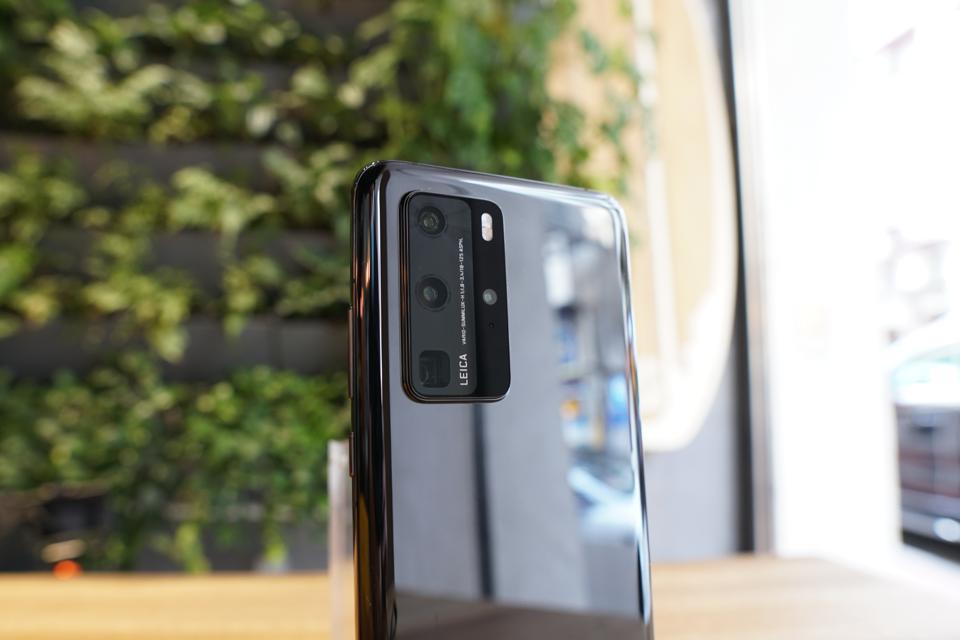 About a year ago, Huawei introduced the P30 Pro, whose main selling point—one of several, anyway—was a custom-built RYYB sensor that is significantly more light-sensitive than traditional RGB sensors used in virtually every digital camera that ever existed.

The RYYB sensor was so uncanny in pulling light out of seemingly pitch black scenes, it led to a string of superlative headlines and tweets from tech writers such as myself. One of my tweets, with photos showing the almost literal night-and-day difference between Huawei’s and Apple’s cameras in low light, was used in an editorial published by prominent tech site The Verge criticizing the iPhone’s cameras.

In the year since, Apple, Samsung, and Google have all improved their camera prowess, especially in low-light situations. For a few months, they closed the gap with Huawei. But then with today’s release of the P40 Pro, the lead is back up—albeit not as wide as last year.

Just take a look at the samples below, three photos captured in my room at night with lights off and curtains closed. The room was pitch black to my eyes. I almost tripped on my way out. 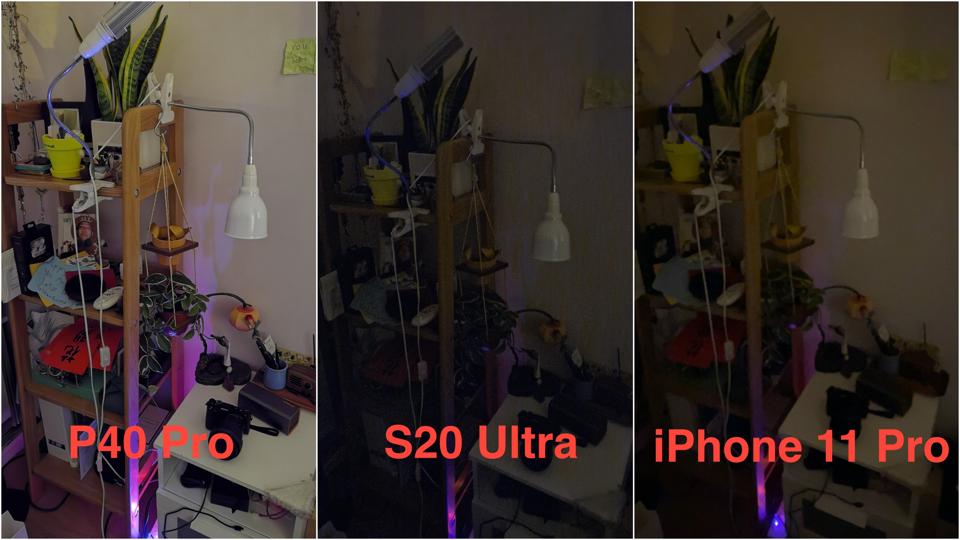 It’s not just the RYYB sensor that’s helping the P40 Pro pull light out of seemingly nowhere. The P40 Pro’s new 50-megapixel camera is built on an image sensor measuring 1/1.28-inches. This is the largest sensor on the market right now, barely edging out Samsung’s 1/1.3-inch sensor used in the Galaxy S20 Ultra. 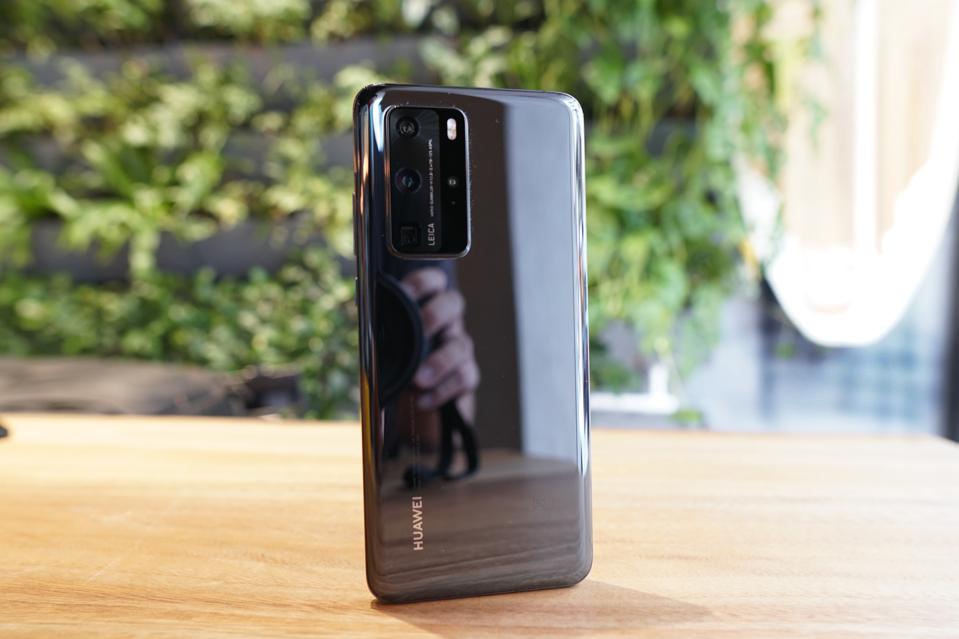 The Huawei P40 Pro has a shiny, reflective glass back.

Here’s another set of low-light photos, captured in a dark alley in Hong Kong. 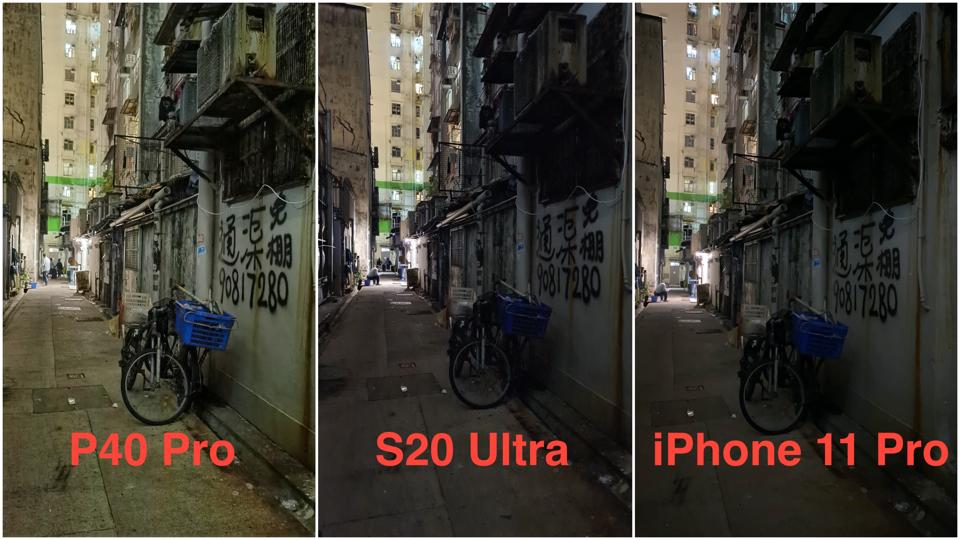 The P40 Pro again pulls in significantly more light than the other two competitors from Apple and … [+] Samsung.

Now of course, there’s more to a mobile camera than just capturing images in extreme low light. So far, after a day of use, I’m impressed with the P40 Pro’s main shooter in all conditions, but I’ll save the verdict for the full review coming later.

The P40 Pro’s main quad camera system also includes a 12-megapixel Periscope zoom lens that can achieve 5x loss-less zoom, 10x almost loss-less zoom and digital zoom up to 50x. From my early testing, it would appear the P40 Pro’s 10x and 20x zoom are excellent, but at 50x, image integrity takes a hit.

Then there’s the ultrawide-angle camera, a 40-megapixel lens that’s very similar to the one used in last fall’s Mate 30 Pro. It has a narrower field of vision than many ultrawide lens on the market, but the higher megapixel count of Huawei’s make for a more detailed and sharper image.

Rounding out the camera system is a TOF (time-of-flight) depth sensor for portrait shots. Below are some photo samples captured from my first 24 hours testing the device. 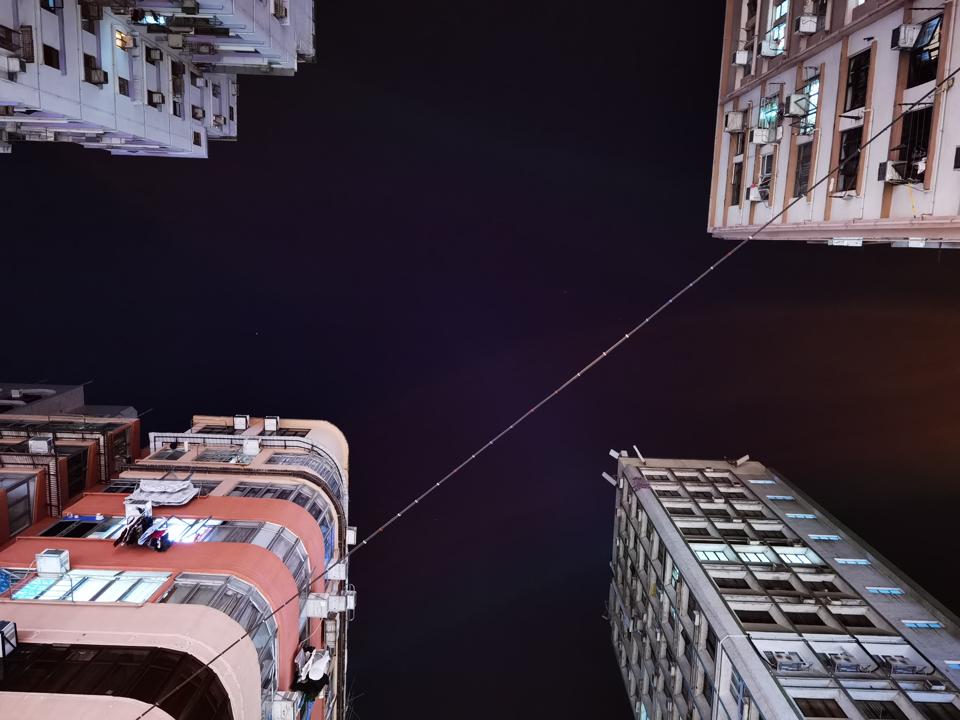 A wide-angle image captured by the P40 Pro. 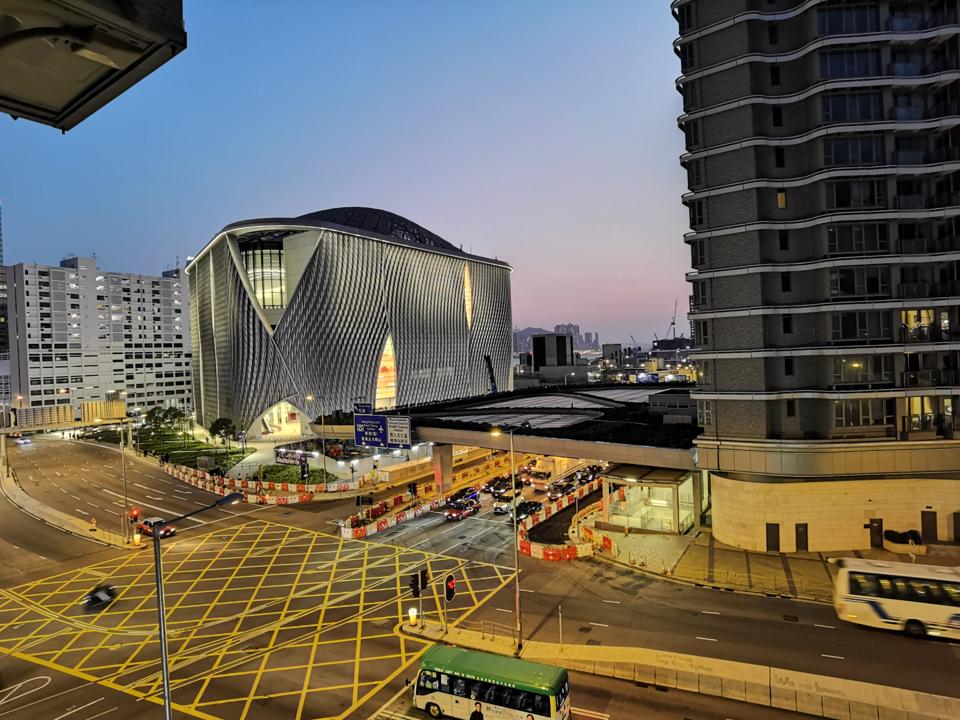 A “night mode” photo captured by the P40 Pro.

The P40 Pro’s screen is a 6.6-inch 2460 x 1200 OLED panel that refreshes at 90Hz. So yes, technically, the P40 Pro’s screen falls a bit short of the Samsung Galaxy S20 Ultra’s and Oppo Find X2 Pro’s Quad HD, 120Hz panel, but the reality is almost all of us won’t be able to see the difference. The P40 Pro panel is gorgeous and sharp, with vivid colors. Animations may not zip around as blazingly fast as a 120Hz panel, but it’s still impossible to spot frame drops—everything is still smooth. 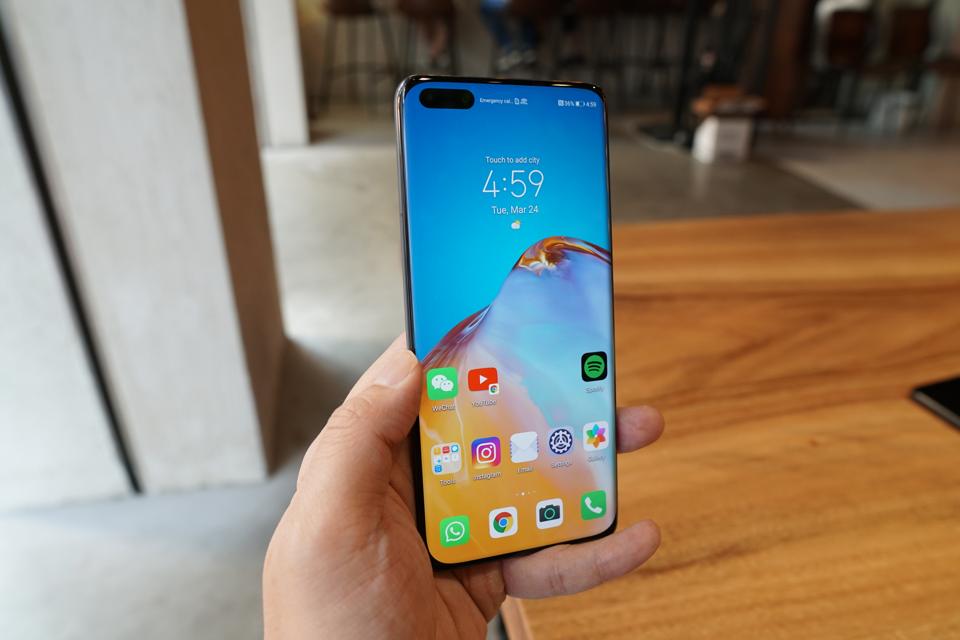 Huawei’s calling this year’s screen the “overflow” display because it curves not just on the left and right side, but at the top and bottom, although the latter curvatures are very subtle, to the point that many may not notice it. It’s a nice subtle design touch that gives the phone an even curvier than usual feel in the hand.

There’s a hole-punch cut-out in the upper left corner of the screen, which houses a 32-megapixel selfie camera and an infrared camera for 3D face unlock. The latter is an impressive hardware breakthrough because phone brands previously had to choose between secure, 3D face scanning that requires a large notch eating into the screen (like an iPhone or last year’s Mate 30 Pro), or a less-secure, basic 2D face scan using just a small selfie camera (like on the Samsung Galaxy S20 Ultra). The P40 Pro has found the middle ground. You get real 3D face unlock, with still a relatively small screen interruption. 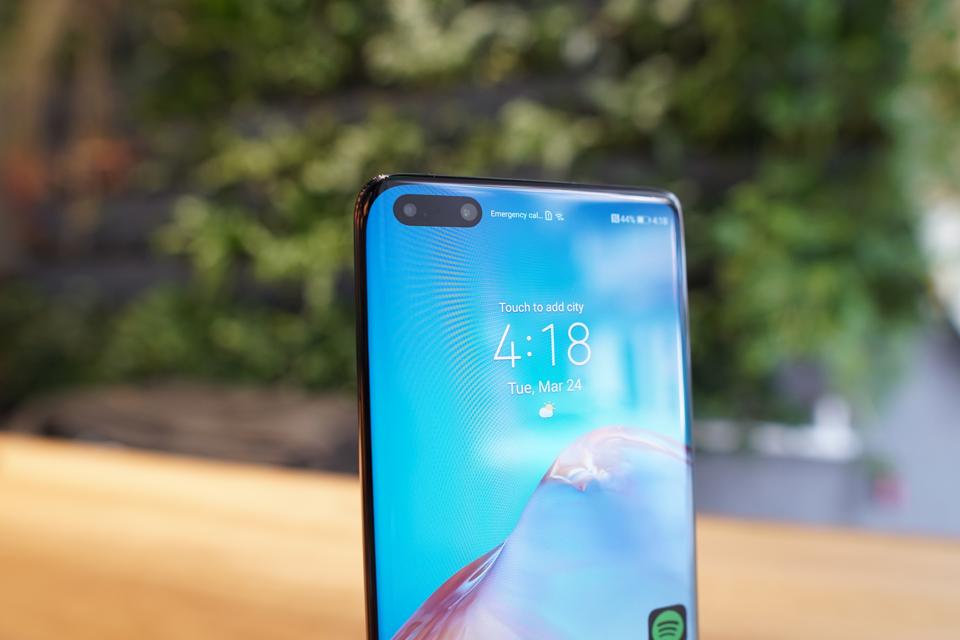 The P40 Pro’s hole-punch cut-out houses a selfie camera and an infrared camera. 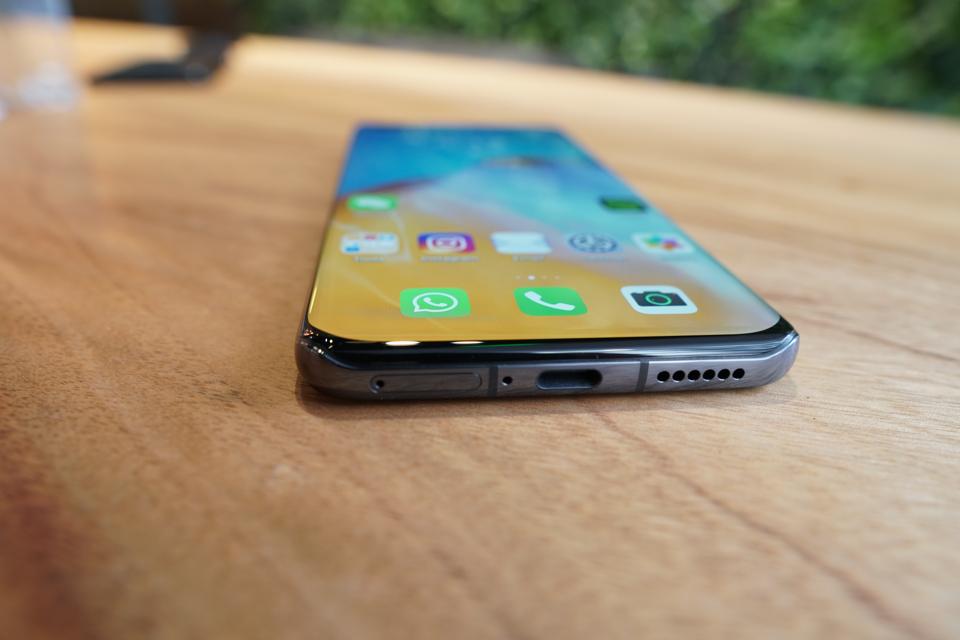 There’s a subtle curvature at the bottom of the screen.

Internal components are as expected

While Huawei tried new things with the camera and screen, the internals are the tried and true: Huawei’s 7nm Kirin 990 chip with a built-in 5G modem, and 8GB of RAM. The 4,200 mAh battery may not pop off the spec sheet like Samsung’s 5,000 mAh, but the P40 Pro, so far from one day of testing, has given me much better battery life thanks to the 90Hz panel, which eats less power than a 120Hz.

The unreal ultra-slow motion video capture which almost slows time to a halt first introduced in the Mate 30 Pro returns here, too.

And in certain countries in Europe, the P40 Pro ships with a new digital assistant named Celia. She speaks English, French and Spanish right now, with more to come, according to Huawei. 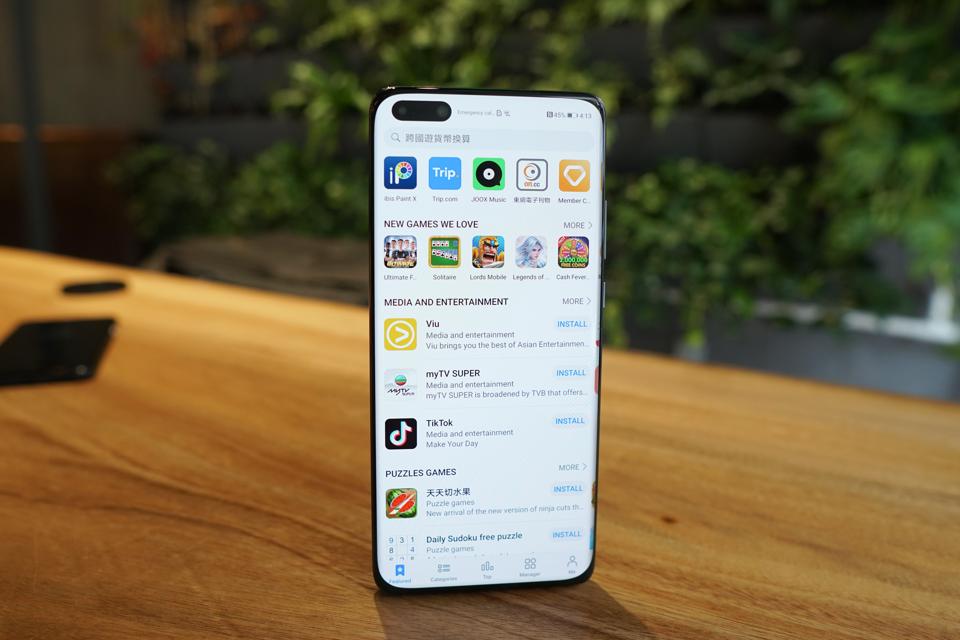 But of course, Celia exists because the P40 Pro, like the last couple of Huawei releases, cannot run Google’s core mobile services. But as I wrote about recently, the restriction isn’t as bad as many initially feared. Most of the world’s most widely used apps, such as Facebook, Twitter and Instagram, still work. Even Google’s own Chrome and Maps work. I can sync Gmail and Google Calendar to third-party apps too.

Huawei’s own app store—named the AppGallery—already has many popular western apps like Microsoft Office, Snapchat, WhatsApp and Amazon.

Huawei has not announced pricing at the time of writing this article, but given Huawei’s history, it is very likely the P40 Pro will be priced near the Samsung/Apple mark, above US$1,100.

There is an even higher-end P40 Plus model, but that’s not due to be released until May. I’ll be back with a full review of the P40 Pro next week.

By The Numbers: Here’s What The Senate Approved In $2 Trillion Stimulus Package

Cybersecurity Priorities Are A Matter Of Perspective