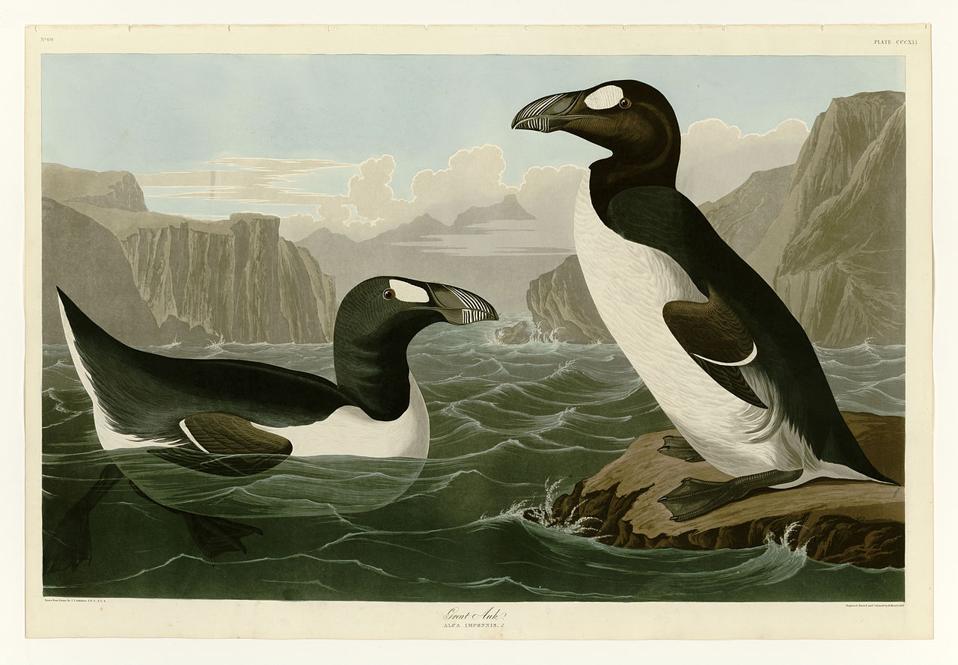 The great auk, Pinguinus impennis, was the original penguin. Millions of these large black-and-white seabirds once ranged widely across the north Atlantic Ocean from the coasts of the northeastern United States and Canada, to Greenland and Iceland, all the way to Norway, Great Britain, France, and the Iberian Peninsula (Figure 1; red area). But by 1844, these birds had all vanished. Why? 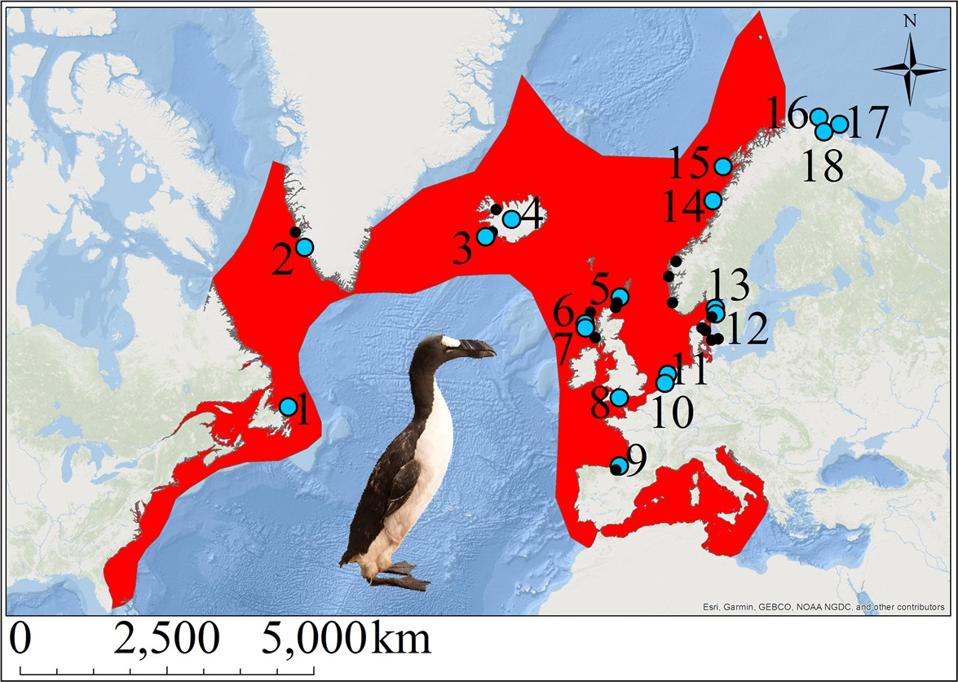 The great auk was the largest member of the alcid family that lived in modern times. The Alcidae include familiar seabirds such as razorbills, who are the closest relatives to great auks, as well as guillemots, murres and puffins. But unlike the rest of its relatives, the great auk was flightless — unique amongst birds living in the north Atlantic — and awkward on land, but they were skilled diving birds that used their wings to “fly” underwater in pursuit of fishes and to escape predators.

Then prehistoric humans appeared and began hunting great auks for their flesh and eggs. By 1500, European seafarers joined the melee after discovering the rich fishing areas around Newfoundland — and discovering that great auks were breeding in huge colonies on Funk Island. Having decimated eider ducks by the 1700s, hunters’ attention quickly fixated on great auks, whose feathers became highly prized for pillows and quilts, thereby increasing the frenzied slaughter.

It didn’t take long to obliterate the great auk population. By 1800, humans’ insatiable greed for their flesh, eggs and feathers had reduced millions of great auks to just a tiny group of birds breeding on one island just off the south-west coast of Iceland. But even there, the birds were not safe: although they were no longer profitable to hunt for food, their skins and eggs were in high demand by collectors and museums. By 1844, the last two great auks were hunted down and strangled by three fishermen on Eldey Island, near Iceland. The birds’ internal organs were eventually placed in a museum. Their single egg, crushed in the hunt, was discarded. Their skins — which could fetch an entire year’s wages — were lost.

Considering the speed of this extinction event, it’s worth asking whether other factors played a role in hastening it: Were great auks already headed for extinction before intensive hunting began? Or was rampant human profiteering and destruction sufficient to drive the species extinct across its vast range?

“Despite the well-documented history of exploitation since the 16th century, it is unclear whether hunting alone could have been responsible for the species’ extinction, or whether the birds were already in decline due to natural environmental changes”, lead author Jessica Thomas said in a press release. Now a postdoctoral researcher at Swansea University, Dr Thomas completed this study as part of her PhD research at Bangor University and at the University of Copenhagen.

To better understand the causes of the great auk’s extinction, Dr Thomas and her collaborators conducted combined analyses of ancient DNA isolated from great auks, GPS-based ocean current data, and population viability analysis, which calculates the probability that a given population will go extinct within a certain number of years. 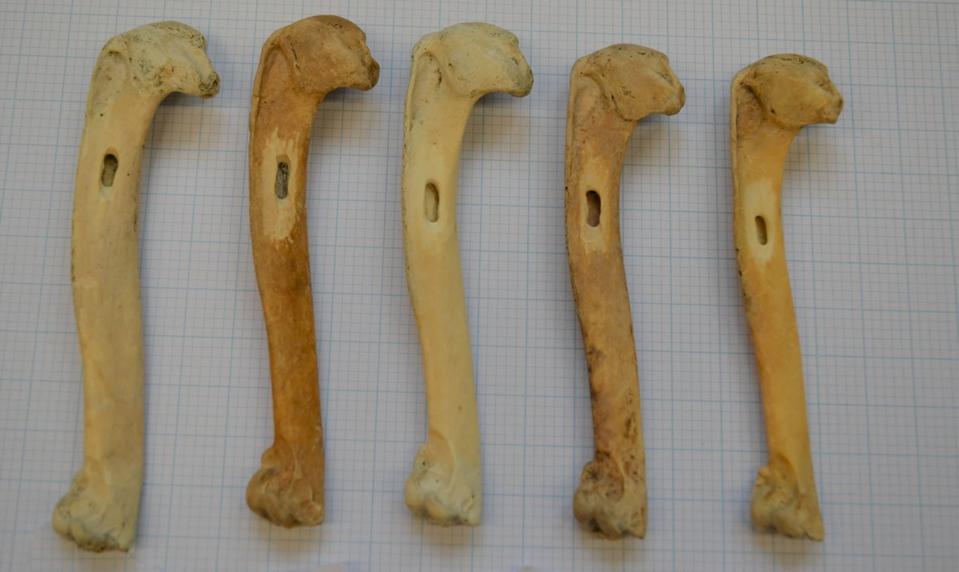 To start, they isolated and sequenced complete mitochondrial genomes from bones (Figure 5), mounted skins or organs stored in museum collections around the world. The sampled birds had been killed all across the great auks’ geographic range (Figure 1; blue circles). DNAs from 41 birds were successfully sequenced, representing the major areas of the great auk’s extensive range, and spanning a time period from around 15,000 years ago to around 170 years ago. The researchers used these ancient DNA sequences to reconstruct the birds’ population structure and dynamics throughout the Holocene period (which includes the most recent 11,700 years of Earth’s history).

Dr Thomas and her collaborators looked for any genetic signatures that the great auk population was in decline prior to the advent of runaway hunting around 1500. One of these genetic signatures is to determine how much variation there is in a given gene between individuals, which could indicate whether the species was inbreeding and becoming vulnerable to disease, to environmental changes or to the introduction of new species into its habitat.

On the other hand, extensive differences in individual DNAs from different locations could indicate that the species was divided into a number of smaller isolated populations that didn’t migrate or otherwise mix their DNAs between groups. This could lead to less overall genetic diversity, increased local inbreeding and an accumulation of genetic errors that could make the species vulnerable to extinction.

Population viability analysis (more here) revealed the great auk had achieved the middle ground: the birds had a constant population size that showed no evidence that suggested a population decline or a pronounced population structure.

Next, Dr Thomas and her collaborators modeled different extinction scenarios. They started by assuming there once were 2 million great auks (a population size that corresponds to 1 million mature birds), and they calculated whether the species may have gone extinct within 350 years if people had harvested 9% of the adult birds annually, along with 5% of the eggs.

According to their calculations, only a 2% harvest rate is reliably sustainable. But contemporary reports document a case where approximately 1000 great auks were caught and killed within half an hour by two fishing vessels off the coast of Funk Island (ref).

“Thus, if each of the 400 vessels in the region spent only half an hour a year harvesting great auks at this rate, that would already correspond to 200,000 birds a year”, the study’s authors write in their paper (ref).

“But their genetic diversity was very high — all but two sequences we found were very different”, Dr Thomas said. The study revealed that the great auk was doing “really well” when intensive hunting began, suggesting that human hunting alone is enough to drive a population into a decline that was too rapid to be captured in these data.

How could flightless seabirds travel across such vast distances?

Considering the immense size of the great auk’s range, it would appear that the species could have been comprised of a number of isolated local populations, rather than being one vast interbreeding population. Which raises the question: How did great auks manage to travel tremendous distances despite being flightless? 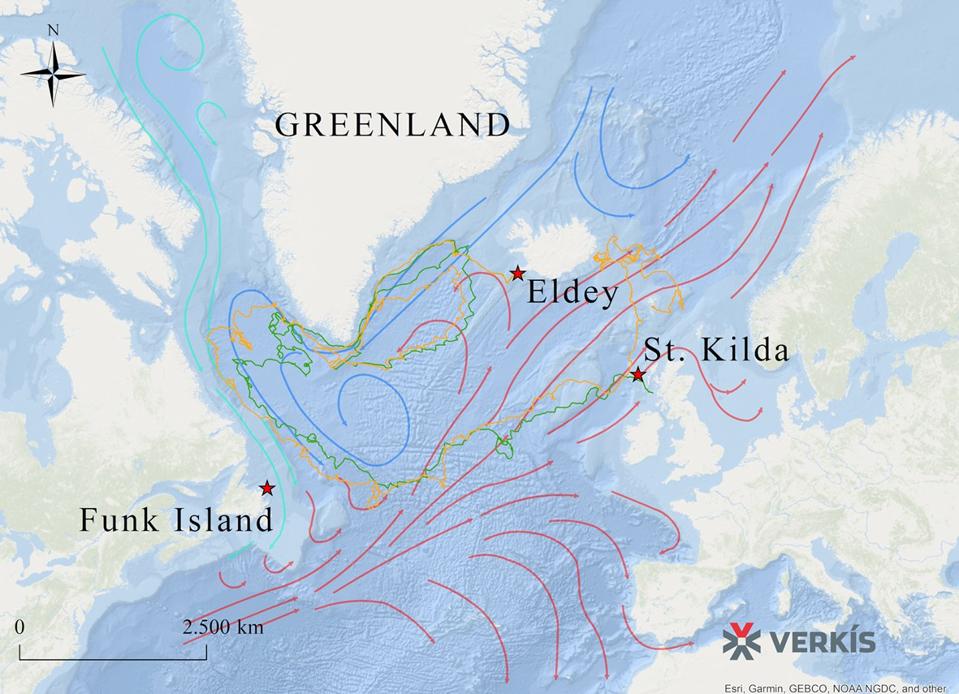 “Taken together, our data don’t suggest that great auks were at risk of extinction prior to intensive human hunting behaviour in the early 16th century”, co-senior author Thomas Gilbert, a Professor of Evolutionary Genomics at the University of Copenhagen, said in a press release.

“But critically, this doesn’t mean that we’ve provided solid evidence that humans alone were the cause of great auk extinction”, Professor Gilbert continued. “What we have demonstrated is that human hunting pressure was likely to have caused extinction even if the birds weren’t already under threat from environmental changes.” 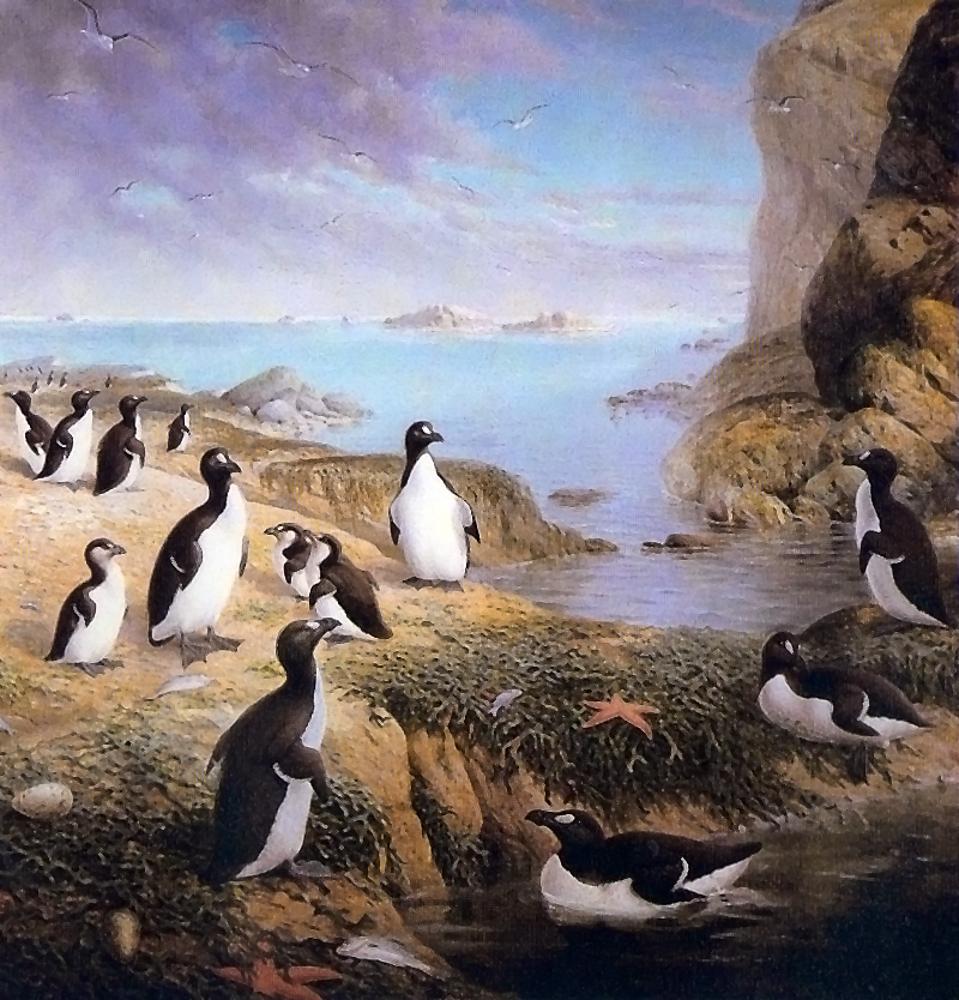 It is worth noting that Dr Thomas and her collaborators’ conclusions are limited by several factors. First, the mitochondrial genome represents just a single genetic marker and second, the sample size (41 individuals) is comparatively small for conducting genetic analyses of an entire population.

“Despite these limitations, the findings help reveal how industrial-scale commercial exploitation of natural resources have the potential to drive an abundant, wide-ranging and genetically diverse species to extinction within a short period of time”, Gary Carvalho, a Professor in Zoology at Bangor University pointed out in a press release.

This study’s conclusions are a tragic reiteration of other studies of avian extinctions, such as Carolina parakeets (here and here), passenger pigeons, which were once the most abundant bird on the planet before being driven extinct through persistent, extensive (and some would argue, senseless) slaughter by European settlers (here and here), and the flightless moas, a group of nine giant bird species that lived throughout New Zealand before being driven extinct after humans arrived (ref).

Further, the great auk’s extinction had been predicted as long ago as 1785 by English explorer and trader, George Cartwright.

“A boat came in from Funk Island laden with birds, chiefly penguins [Great Auks],” Mr Cartwright was quoted as writing in the Bent Life Histories of North American Diving Birds (1919). “But it has been customary of late years, for several crews of men to live all summer on that island, for the sole purpose of killing birds for the sake of their feathers, the destruction which they have made is incredible. If a stop is not soon put to that practice, the whole breed will be diminished to almost nothing.”

This study underscores the fact that seabirds are one of the most threatened groups of birds alive today. At least one-third of all seabirds are currently at risk of extinction, and more than half are declining in number. Thanks to human recklessness and greed, seabirds are threatened by climate change, habitat loss, pollution (including — but not limited to — oil spills), overfishing and the so-called “harvesting” of eggs, chicks and adults for food and hunting trophies.

“Our work also emphasises the need to thoroughly monitor commercially harvested species, particularly in poorly researched environments such as our oceans”, Michael Knapp, Senior Lecturer in Biological Anthropology and Rutherford Discovery Fellow at the University of Otago, said in a press release. “This will help lay the platform for sustainable ecosystems and ensure more effective conservation efforts.”

How To Become A ‘Compelled Entrepreneur’