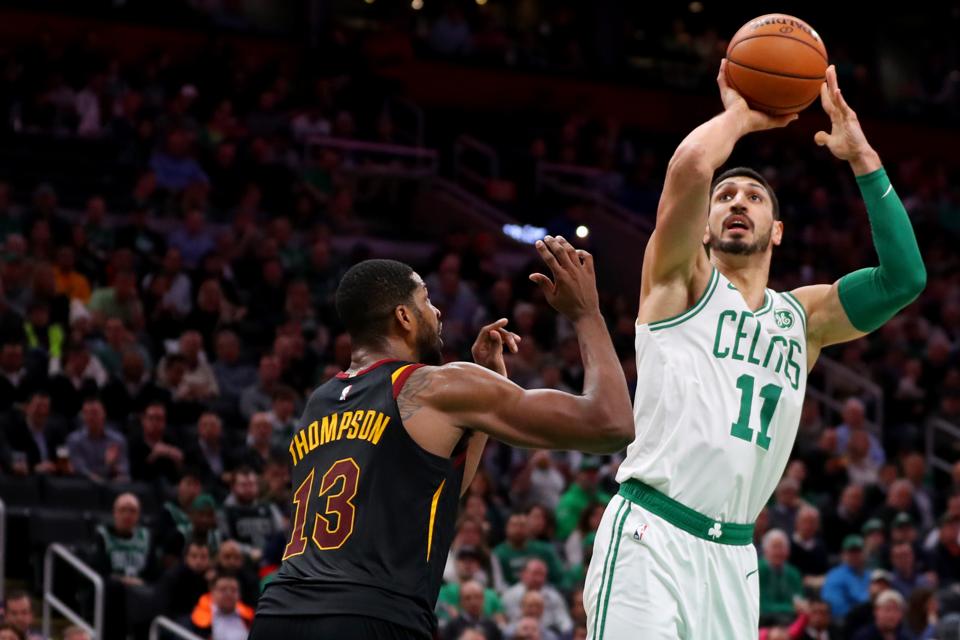 Enes Kanter, whose public opposition to Turkey’s repressive regime has put his family in danger, is … [+] one of the most important social justice voices in sports. (Photo by Maddie Meyer/Getty Images)

The credibility of the NBA’s social justice warriors took a hit this year when none of the league’s preeminent voices on domestic issues were willing to rebuke the Chinese government for suspending its ties with the NBA after Rockets general manager Daryl Morey had sent a tweet expressing support for the Hong Kong protesters.

Enter Enes Kanter. The Celtics’ big man, who is literally an enemy of his own country, lambasted James for his capitulation to the Chinese government. “FREEDOM IS NOT FREE,” he tweeted in all caps.

Kanter knows the true cost of speaking out, which extends far beyond losing endorsement deals. The veteran center has vociferously opposed Turkish president Recep Tayyip Erdogan’s authoritarian regime for years, but the ante increased dramatically after a failed coup in 2016, which prompted Erdogan’s government to target supposed enemies inside of Turkey — including Kanter’s family. His father lost his job and was arrested; his sister could not land a job after medical school. In addition, Kanter is facing an arrest warrant from corrupt Turkish prosecutors. In 2017, he was held at a Romanian airport, only making it back to the U.S. after the State Department had intervened.

Kanter’s passport has been revoked, making international travel risky. He has a phone call scheduled with Canadian Prime Minister Justin Trudeau ahead of the Celtics’ Christmas Day game against the Raptors in Toronto.

As Kanter tweeted, he hasn’t seen his family in five years, and probably won’t for as long as Erdogan is in power. He also faces regular death threats. Undoubtedly, his life would be a lot easier if he stayed silent. Most people probably would. Even former NBA player Hedo Turkoglu, who now strangely works as a spokesperson for Erdogan, accused Kanter of conducting a “smear campaign” against Turkey.

But true activism often comes with a serious price. Opportunism does not. That is not to say LeBron’s valid criticisms of police brutality, social injustice and President Trump are invalid. In fact, it is quite ironic that many of the same people who castigate LeBron for speaking out admonished him for staying silent. They are bad faith actors.

But it is worth noting that unlike other great athlete activists, such as Muhammad Ali and even Kareem Abdul-Jabbar, James profits off his activism. His HBO show, “The Shop,” features LeBron and other prominent black celebrities debating some of the social and political issues of the day.

Social awareness is part of LeBron’s brand, which happens to be heavily invested in China. Nike pays James $1 billion to serve as one of its lead ambassadors, and of course, generates billions of dollars in revenue from the Chinese market. In the past, LeBron has visited China on behalf of the $34.5 billion company.

When it came time for LeBron to choose between profits and morals, he selected the former.

Kanter is facing a far more serious choice between safety and principles. And yet, he’s still speaking out. “For me, it’s principles over anything, over business, over money, over endorsement deals,” Kanter said recently, via WBUR. “This is way bigger than basketball because it doesn’t just affect me. It affects millions of people.”

While Kanter is safe in the U.S., President Trump’s friendly relationship with President Erdogan must be concerning as well. The president’s track record of standing up for Americans abroad is less than stellar. Most infamously, Trump excused Saudi Arabia for the killing of Washington Post journalist Jamal Khashoggi, saying we may “never know the facts around the case.”

Two weeks ago, Trump also protected the Saudis after one of their air force officers opened fire on his classmates at a U.S. naval base. In a statement, he expressed the king’s condolences, and never chastised the rogue state.

Turkish officials have already been able to act with some impunity on U.S. soil. When Erdogan’s security officers attacked a group of American protesters outside of the Turkish embassy in Washington D.C., Trump did not express an interest in punishing the perpetrators or offer any statement of support.

In this time of global upheaval, there is a growing vacuum for strong leaders on human rights. Kanter, who writes the word “freedom” on his shoes, seems to believe his cause is greater than basketball or any sort of brand endorsement. He is the NBA’s most credible social justice voice, and due to his refusal to stand down to real pressure, is one of the most important voices in sports.

4 Foolproof Hacks For Making Your Dreams A Reality In 2020

Feeling Stressed? Laugh It Off With These 7...

What Lies Ahead For FC Barcelona In The...