Inside The ‘Jurassic World’ Live Tour And Its Global Aspirations 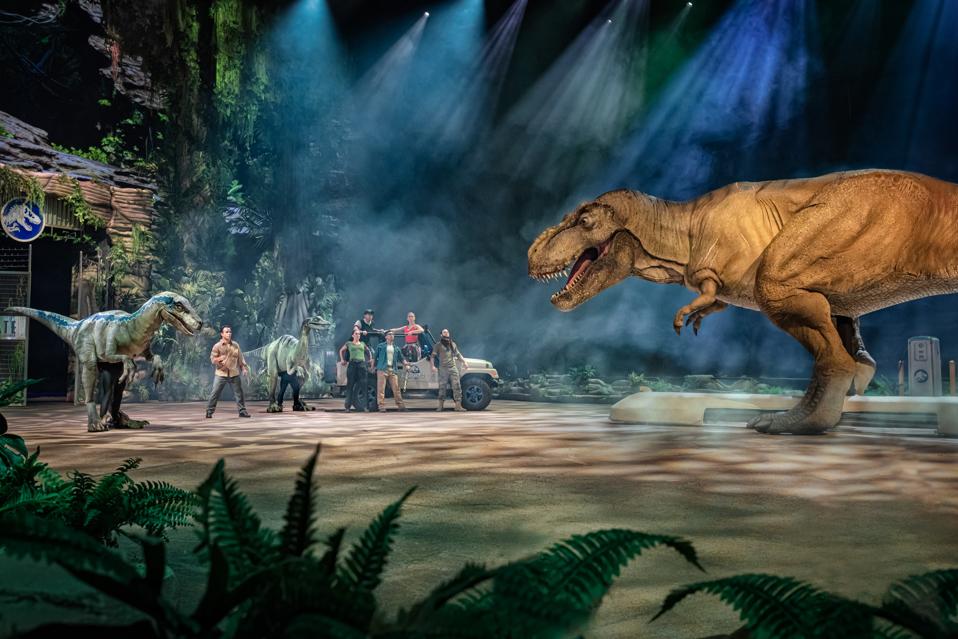 Since debuting in September, ‘Jurassic World Live’ has already completed a series of shows across … [+] the US and has announced dates through to the end of 2020.

2019 saw the multibillion-dollar Jurassic franchise take on new life, a life that was born out of an unassuming warehouse in Burbank, California.

The film series kicked off in 1993. Unadjusted for inflation, the five-film series has grossed $4.95 billion at the worldwide box office to date. The as-yet-untitled sixth entry in the Jurassic franchise, and the third in the Jurassic World trilogy, will hit theaters in June 2021. But between then and now, the colossal Jurassic World Live arena tour has center stage.

“NBCUniversal approached Feld Entertainment to say they would love to create a live show around the franchise and wondered if we would be interested,” explained Chris Nobels, Senior Director of Production and Associate Producer at Feld, as we walked around the facility.

“That was about two years ago. We developed an original storyline and pitched it back to the NBC team, including Frank Marshall from Amblin and director Colin Trevorrow, he’s the steward of the brand now, and they loved the idea.”

“We were able to present to Steven Spielberg right before Christmas of last year, to make sure he was aware of what we were up to, and he gave huge kudos and loved what we’re doing to extend the brand. To have his endorsement and support was a huge deal. One of the things we talked to him about was that we’re bringing the T-Rex to life for the first time. It’s something that he always wanted to do and had not been able to for the film, so when he found out that we were doing that, it was exciting for him.”

He added: “That also gave us that added layer of needing to make sure that we were getting it right and another reminder that we’re doing things that had never been done with the franchise before.

The Jurassic IP has been around for 26 years and spawned everything from lunch boxes and clothing to theme park attractions. It continues to be wildly lucrative and shows no sign of falling out of favor with audiences. The most recent franchise entries, Jurassic World and Jurassic World: Fallen Kingdom, grossed $1.07 billion at the domestic box office alone, unadjusted.

Since debuting in September, Jurassic World Live has already completed a series of shows across the US and announced dates through to the end of 2020. More are due to be added.

“We take every brand, and we treat them as if they are our own, and we make sure that we’re working with the licensor as closely as possible,” added Nobels. “We want to stay true to their brand and their expectations, but not only where the brand is today, because our shows live for multiple years, into the future. We’ll typically do a two-year US tour and then a two to three-year international tour hitting Europe, Asia, Australia, South America, South Africa, and do a whole lap of the world. So we need to make sure that we’re not only aligned today, but we’re aligned in four or five years from now.”

Taking multibillion-dollar franchises and transferring them to the arena environment is something that Feld Entertainment has a successful track record in. Nobels explained: “We’re either the second or third longest licensee of Disney through our Disney on Ice and Disney Live brands. So we’re very familiar with, and understand, the stewardship of IPs and making sure we’re delivering an authentic show, keeping both in mind the brand and what the audience expects.”

“We also produce Marvel Universe Live. With that one, it’s all about bringing the superheroes to life and creating that fantastical world, so with Jurassic World Live, it felt very naturally in our wheelhouse.” 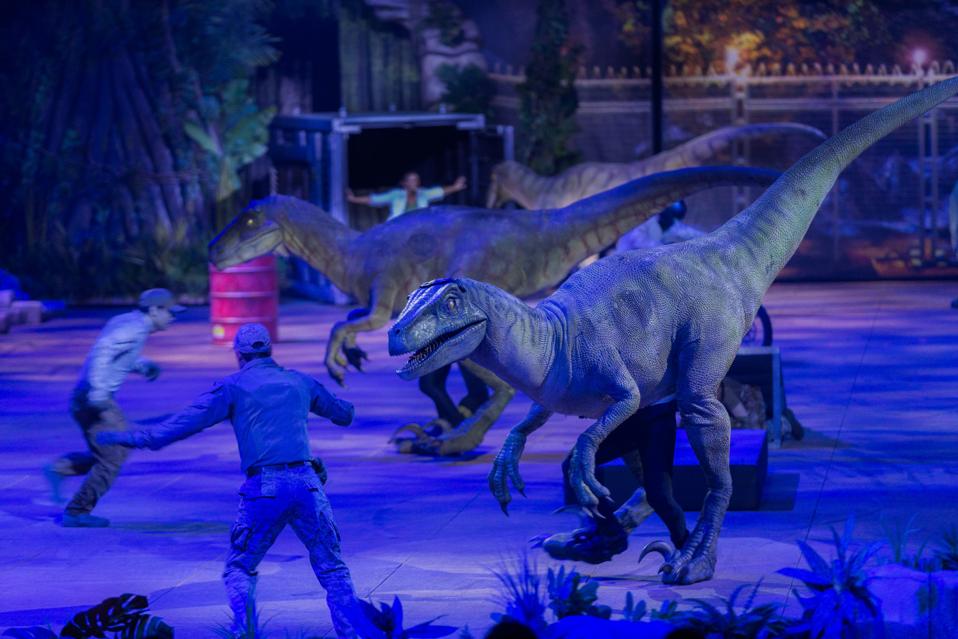 ‘Jurassic World’ is just the latest multibillion-dollar franchise or IP that Feld Entertainment has … [+] taken from the screen to the arena environment.

He added: “It is a huge responsibility. We have to deliver what the audience expects based on what they’ve seen and how they’ve been introduced to the brand. The filmmakers have done such an amazing job in their storytelling. The pressure is now on us to take it off the screen into real life and make the dinosaurs just as believable. That’s what we do here. What we don’t have going for us, though, is CGI and the fact we can’t do close-ups.”

Creating the sizable inhabitants of the Jurassic World Live experience has been no small task, and it’s not an inexpensive one at that. Although Nobels wouldn’t go into specifics, as we moved amongst the dinosaurs in the Burbank facility, he did reveal what dictates the cost of bringing fantasy into reality.

“With each one, we didn’t look at them with a specific line item cost; it was more about what do we need each dinosaur to do,” he said. “Really, that’s what dictated how much each one cost above anything else. We needed the Triceratops to able to charge and run and stoop low and be in a battle position, and that’s more involved.”

“The Stegosaurus mom is more passive, peaceful, wanders around, interacting with our heroes as the audience with her baby. As a result, she’s a simpler beast. More than cost, the top priority was that they were as realistic as possible. We’ve got Jeannie, the Troodon, the pack Raptors, Blue and the Baby Stegosaurus who all have dino-teers inside and they’re all puppeted. Our big ones, the Triceratops, the Stegosaurus, the T-Rex, are all mechanically driven. With those, there is still a dino-teer, but instead of being inside, they’re operating it via offboard remote control. All of these elements have their own price tag.”

He concluded: “The return on that investment is, aside from ticket sales, seeing the audience reactions. I was at the movie theater when the first Jurassic Park movie came out, and again at the second, and the third, then Jurassic World and Jurassic World: Fallen Kingdom. It’s been true to me ever since the very first movie. It’s such a great brand, and it is known wherever you go in the world.”

“People who saw the first one in theaters are now taking the kids in their lives to see the movies and the live shows. I saw Jurassic Park with my Dad, and now I take my nieces and nephews. This arena show means they get to enjoy this world in a whole new way, in a whole new environment, and it’s an honor to be a part of that.”

The Jurassic World Live Tour is on the road throughout 2020.

Disney Edits Same-Sex Kiss Out Of ‘Star Wars: The Rise Of Skywalker’ In Singapore

BTS’s New Single Is The First Release In...