Home Business Is The Next El Clasico The Most Important For Years?
Business

Is The Next El Clasico The Most Important For Years? 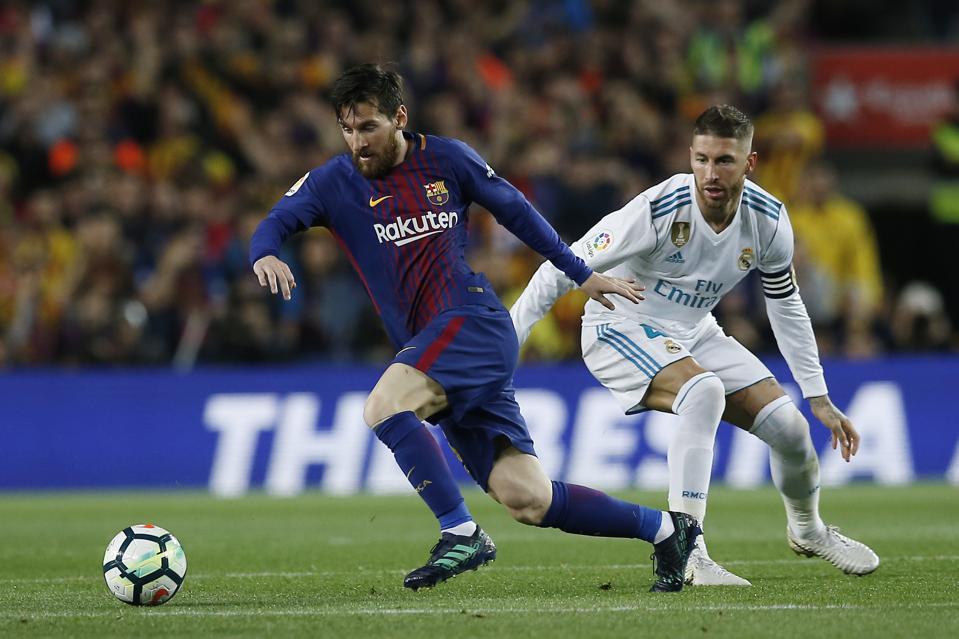 Who, out of Barcelona’s Lionel Messi and Real Madrid’s Sergio Ramos, will come out on top in El … [+] Clasico?. (AP Photo/Manu Fernandez)

It’s the one club game every season that is guaranteed a worldwide audience.

El Clasico – Barcelona v Real Madrid – doesn’t just see the rest of Spain come to a standstill. Bars and pubs across Europe and as far as the United States are sure to tune in.

Until last season, there was always the Messi v Ronaldo rivalry to add an extra layer of expectancy to proceedings, but even though that particular match-up no longer exists, it doesn’t take away from the enormity of the fixture. Millions of euros worth of playing talent is on show, and in the one game no one wants to lose.

It’s a fixture that Barca can legitimately claim they’ve had the upper hand in, in recent years. Certainly in La Liga in any case.

The Catalans are unbeaten in the last six league Clasico’s, home and away, and have only lost against Real Madrid four times in the last 22 La Liga meetings, stretching back to December 2008.

However, such is the form of both teams at this point, that Zinedine Zidane and his side arguably have one of their best chances to go to the Camp Nou and come away with three points.

It’s so tight at the top at the moment, that a win for either side could have a huge bearing on the rest of the season.

Free of Ronaldo’s shackles, Karim Benzema is flying for Los Blancos. That he’s top of the scoring charts (ahead of Messi et al) evidences his quality in the box, and makes a mockery of the boos and whistles he received for an extended period a while back.

They’re now the preserve of Gareth Bale, the Welshman upsetting the Madrid faithful with his antics in front of a ‘Wales. Golf. Madrid. In that order’ flag during his country’s post-match celebrations after qualifying for Euro2020.

Bale, in fact, should have a huge part to play in this one, because Barca are really struggling for any sort of defensive cohesion in 2019/20. Clean sheets have been a rarity, and Bale’s pace will scare the living daylights out of a back four that are nowhere close to their best.

A match-winning contribution could well see him back in the Madridistas good books, and give Zidane more food for thought in terms of whether he allows Bale a more regular starting berth.

Ernesto Valverde has an attacking conundrum of his own, and that’s how to fit Antoine Griezmann into his front line effectively.

The French World Cup winner has done his best to integrate into the side, but being shunted into a position that isn’t his natural habitat has clearly diluted his influence.

Griezmann has always enjoyed his battles against Real, as has Messi, who can extend his all-time best scoring figures in the fixture if he finds the net once more.

Whilst it won’t see either side surge ahead at the summit, the result could cause ripples in the boardroom for one or the other.

Real Madrid are playing so well they simply have to get a league win at the Camp Nou. The expectation, from president and board, will be that Zidane will pull off exactly that, too.

Should he not do so, questions are likely to be asked again as to his suitability in the role.

The clamour for Ernesto Valverde to be relieved of his duties will reach an entirely new level altogether if Barca don’t end up with the three points.

Pressure has been steadily building on the Basque coach’s shoulders, and a morale-sapping defeat against their eternal rivals will be frowned upon at best.

Particularly if Barca continue with a brand of football that many commentators are calling ‘boring.’ That is not acceptable to anyone associated with the club.

To that end, this could be the most important league clash between the two Spanish behemoths for years.

‘Trial By Fire’: An FC Barcelona Versus Atletico Madrid Preview

Delicious Is The New Black: Haute Couture And...

Box Office: ‘Joker’ Bottoms Out As It Nears...