I saw the cheery polka-dot plate in an Emma Bridgewater shop, over a decade ago. I was moving to a new apartment and looking for basic home goods, and I appreciated the dish’s simple design. “Is it microwaveable?” I asked the sales assistant.

“It’s melamine,” she responded in a well, that’s a dumb question tone.

I’d never heard of melamine, so I didn’t know anything about its heat-related properties. Melamine, it turns out, is definitely not microwave-friendly. I found this out in dramatic fashion, when I forgot what I was dealing with and popped it into the microwave. It caused sparks and alarming zapping noises. So the slightly singed polka-dot plate was relegated to the very bottom of my stack of tableware, to be used only when I’d run out of other options.

To other people, melamine may be best known as the center of a 2008 scandal in China, where dozens of food companies were found to have added relatively pure melamine to milk powder to increase the protein content. This milk powder was used in infant formula, and thousands of babies became ill as a result. 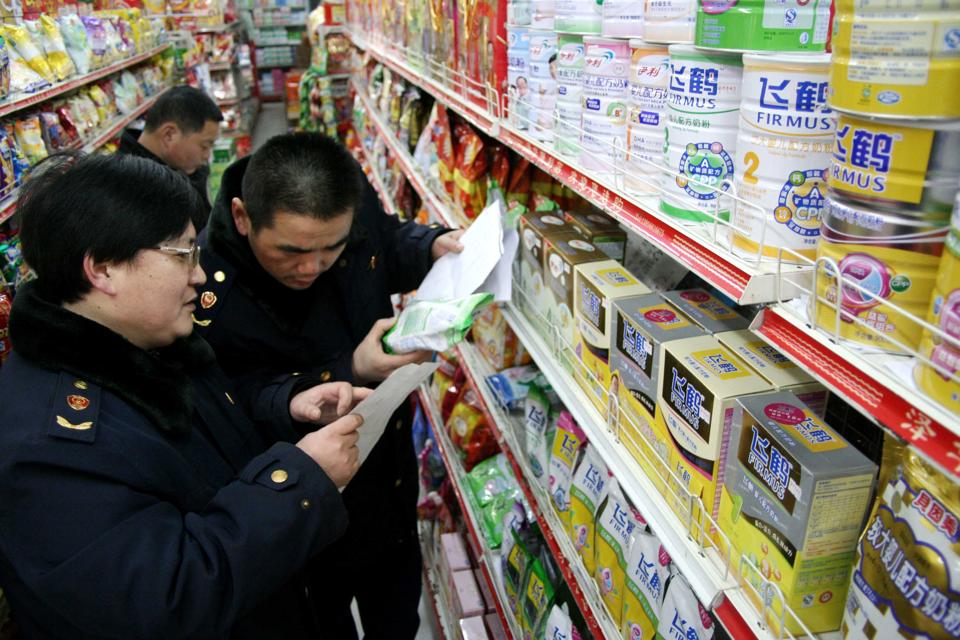 Chinese health enforcement officers check the labels of milk powders in Hanshan, China in 2010, … [+] during a new crackdown on milk products tainted with melamine (Photo by STR/AFP via Getty Images)

Melamine is a nitrogen-rich chemical compound with a wide array of uses, including fertilizers, resins, construction materials, and flame retardants. China is the main producer of this synthetic compound, and melamine-containing products are exported around the world. And, as suggested by the Chinese milk powder tragedy, melamine is occasionally added illegally to foods to boost the apparent protein content. But it doesn’t even accomplish that. This is a false reading, massaged by certain analytical methods, making the infant deaths even more senseless.

Melamine has also been added to pet food products to artificially increase the protein reading. This resulted in thousands of deaths of cats and dogs in 2007, and one of the largest-ever pet food recalls in the US. Yet melamine contamination continues to be found in foods and supplements in multiple countries.

A common consumer application for this substance is molding plastic tableware using melamine-formaldehyde resin. According to the US Food and Drug Administration (FDA), “melamine does not migrate from melamine-formaldehyde tableware into most foods.” The FDA does warn against exposing highly acidic foods to very high temperatures, however.

Melamine-containing plastic products are sometimes touted for being BPA-free, so consumers who believe they’re choosing healthier products may be swapping out one toxin for another. While melamine is found in all sorts of tableware, including trays, plates, and bowls, its sturdiness makes it especially handy in children’s items and outdoor/camping gear. 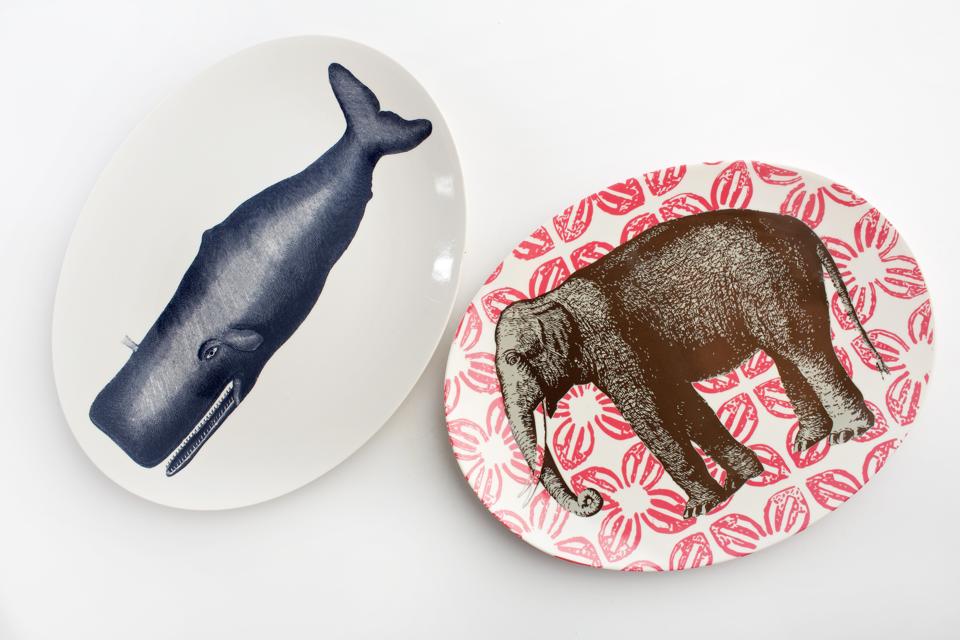 Melamine trays for sale in Washington, DC in 2014 (Photo by Deb Lindsey for the Washington Post)

There’s not enough research on the health impacts of melamine, including for the workers involved in its processing. But of the research that does exist, “There is strong evidence that melamine induces chronic inflammation in the urinary tract,” according to the International Agency for Research on Cancer. Some studies on rodents have also found significant increases in incidence of urinary bladder carcinomas as a result of melamine feeding. So researchers are primarily concerned about sustained exposure to melamine in ingested form, although most people will come into contact with melamine through indirect means in low quantities.

But this low-level exposure adds up. “Melamine is frequently found in waters when tested, also in drinking water. It has been detected in breast milk and in children’s urine, both in Asia and in the US,” explains Anna Lennquist, the senior toxicologist at the International Chemical Secretariat. “In itself this is worrying, as we have a constant exposure for this chemical even if the levels in many waters are below established “safe” levels. We simply do not know what effects this long-term exposure will have.”

Signs of melamine poisoning include blood in urine, reduced urine, and high blood pressure. These symptoms indicate possible links to kidney stones and kidney failure. Lennquist also points to irritation of the skin and lungs.

Next steps on melamine

Germany has proposed EU-wide classification of melamine as a suspected human carcinogen, and “Danger” labels warning of toxicity to humans from repeated exposure. According to Hanna-Kaisa Torkkeli, a press officer for the European Chemicals Agency (ECHA), “The public consultation on that [harmonized classification and labelling] proposal is expected to start in December this year.”

In the meantime, many consumers and businesses remain unaware of the uncertainty around melamine. Most of the UK suppliers of melamine products I contacted didn’t respond to requests for comments; those that did respond were unfamiliar with melamine. One company continues to advertise “magnificent melamine” items on its website. Retailers of melamine products in the UK represent all segments of the market, from discount chains to luxury department stores, and including retailers known for their environmental commitments. Clearly melamine exposure is a cross-cutting issue.

“What you can do as a consumer to minimize exposure, is to avoid melamine food ware. Even if melamine is bound within the plastics, studies have showed it can leak into food items,” advises Lennquist. Her organization, the International Chemical Secretariat, recently added melamine to the 2019 edition of its SIN List (or Substitute It Now List).

Lennquist continues, “Companies producing or using melamine should look into alternatives now, and support innovation of such alternatives. Meanwhile assure minimal exposure to workers and minimal release to the environment.”

Yet what she calls “the most powerful incentive for innovation of alternatives” in Europe would be placing melamine on the EU’s REACH (Registration, Evaluation, Authorisation and Restriction of Chemicals) candidate list. Companies are unlikely to take melamine substitution seriously until this is a legal requirement. As commented by Elizabeth Andoh-Kesson, Food Policy Advisor at the British Retail Consortium, “The approval of melamine for use in plastics and food contact materials is governed by EU regulations that sets specific limits to minimize any risk of migration into foods.” In other words, they’ll wait for REACH.

Until governments decide that substances like melamine require further scrutiny, consumers like myself will be left to ask more questions when shopping for polka-dot plates.

The State Of Nukes In Iran And North...

The 19th: A Revolutionary Non-Partisan News Site For...

How To Find Your Mentor And Grow Your...