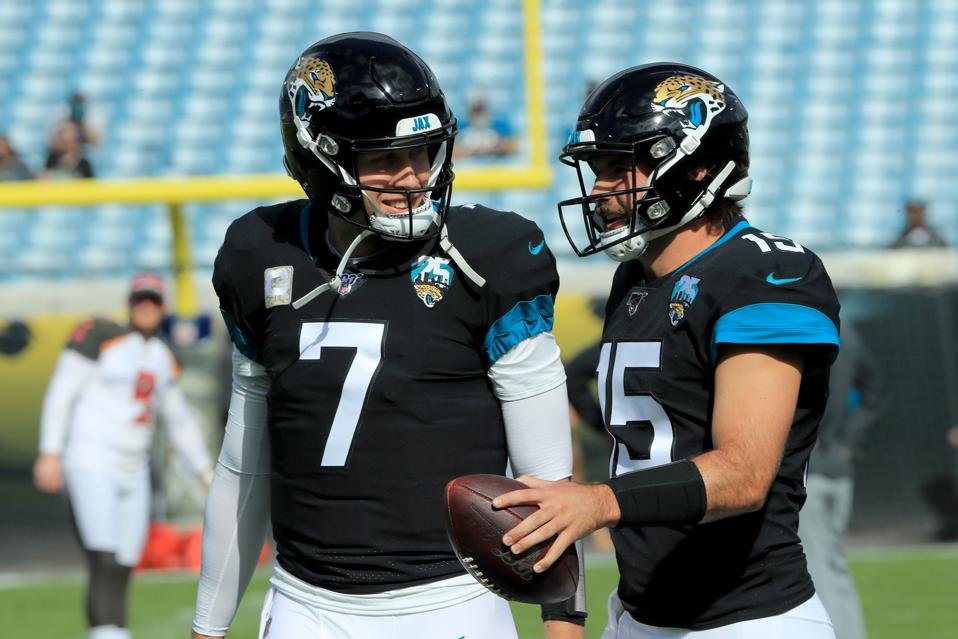 JACKSONVILLE, FLORIDA – DECEMBER 01: Nick Foles #7 and Gardner Minshew #15 of the Jacksonville … [+] Jaguars warm up prior to the game against the Tampa Bay Buccaneers at TIAA Bank Field on December 01, 2019 in Jacksonville, Florida. (Photo by Sam Greenwood/Getty Images)

Jaguars head coach Doug Marrone was asked this week at the 2020 NFL Scouting Combine in Indianapolis, IN if a decision had been made on who would start at quarterback, Nick Foles or Gardner Minshew. Marrone would not tip his hand as to which player will start in 2020.

“We’re in a position where we feel we’ve got two guys who can play,” Marrone told reporters in Indianapolis, IN. 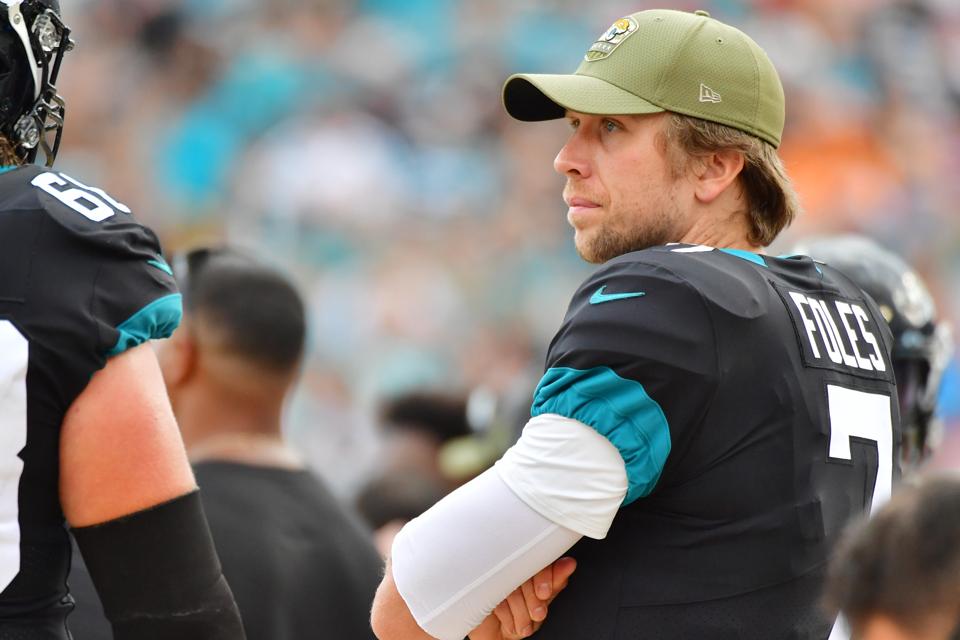 JACKSONVILLE, FLORIDA – DECEMBER 01: Nick Foles #7 of the Jacksonville Jaguars looks on during the … [+] third quarter of a football game against the Tampa Bay Buccaneers at TIAA Bank Field on December 01, 2019 in Jacksonville, Florida. (Photo by Julio Aguilar/Getty Images)

Jaguars general manager Dave Caldwell did not seemed concerned with the idea of Foles being a pricey backup. He told Jaguars.com senior writer John Oehser that the team looks at the position as a group.

“We allocate an allotment per position in what we want to budget for that position,” Caldwell said on Jaguars.com. “We’re well under what we would budget for the position between the two players. It doesn’t prevent us from signing players or going out and getting free agents. That position group is actually in very good shape. “

Caldwell also weighed in on the competition at quarterback. 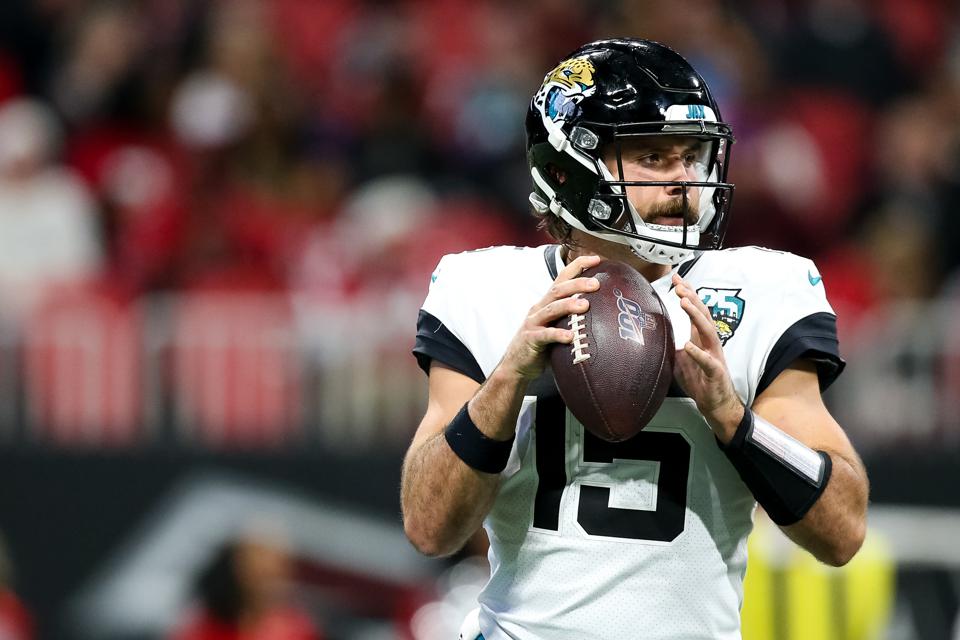 ATLANTA, GA – DECEMBER 22: Gardner Minshew II #15 of the Jacksonville Jaguars looks to pass during a … [+] game against the Atlanta Falcons at Mercedes-Benz Stadium on December 22, 2019 in Atlanta, Georgia. (Photo by Carmen Mandato/Getty Images)

“I think both of those guys are in a situation where they both have proven in their own way that they can be a good quarterback in the NFL,” Caldwell said. “Nick has a much larger body of work than Gardner does. For what Gardner did last year as a rookie, I think was very impressive. He won six games and was .500 in the games he started – 20-plus touchdowns, low interception rate. It felt like he had probably the best stats of any rookie quarterback last year. It is something we have to take note to, but like [owner] Shad [Khan] said a couple weeks ago; we have two quarterbacks that we feel really good about. We’ll see what Coach [Jay] Gruden devises with our offense, Coach [Ben] McAdoo and kind of go from there.” 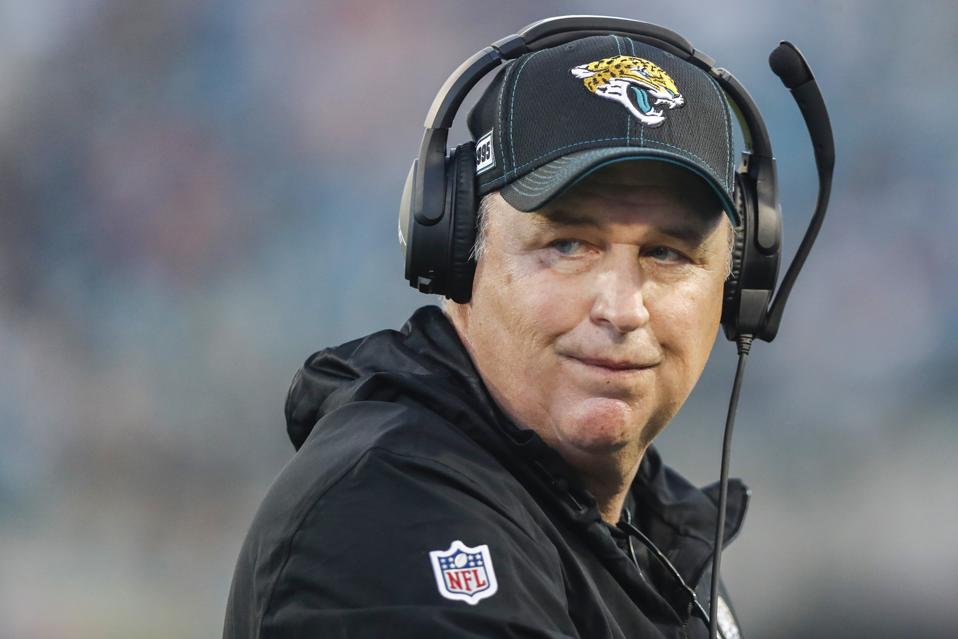 JACKSONVILLE, FLORIDA – DECEMBER 29: head coach Doug Marrone of the Jacksonville Jaguars looks on … [+] during the second quarter of a game against the Indianapolis Colts at TIAA Bank Field on December 29, 2019 in Jacksonville, Florida. (Photo by James Gilbert/Getty Images)

McAdoo joins Marrone’s staff as the quarterbacks coach. He brings plenty of experience having coached in the NFL for 14 seasons. Most recently he served as the head coach of the New York Giants  (2016-17) after serving as the team’s offensive coordinator (2014-15). 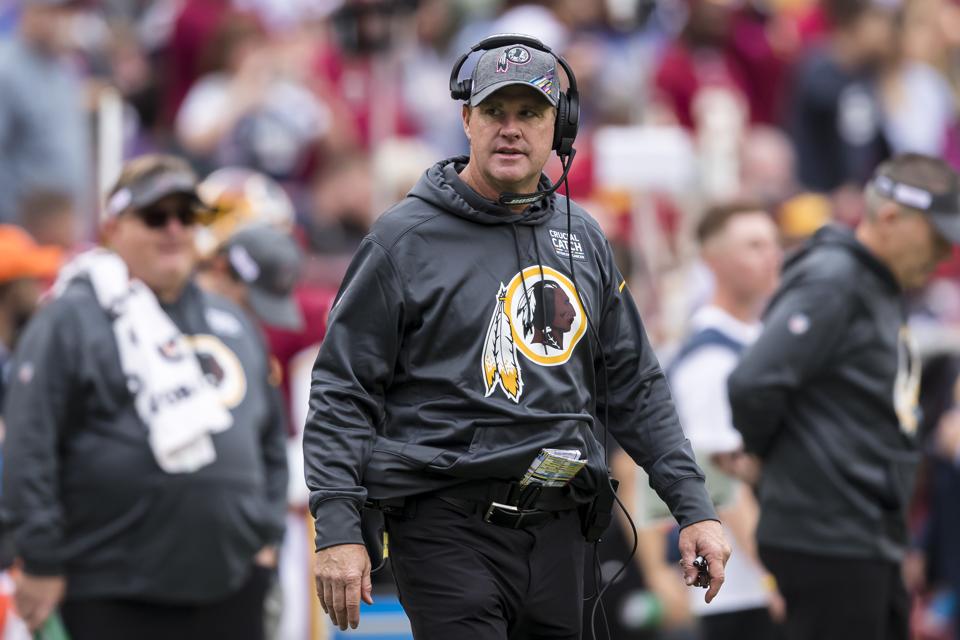 LANDOVER, MD – OCTOBER 06: Head coach Jay Gruden of the Washington Redskins looks on during the … [+] first half against the New England Patriots at FedExField on October 6, 2019 in Landover, Maryland. (Photo by Scott Taetsch/Getty Images)

Gruden told Jaguars.com senior reporter John Oehser he has spent the last month with the offensive staff studying the team’s offensive personnel. He also towed the company line when discussing the quarterback situation.

“Nick had an unfortunate injury. He comes in, throws a nice touchdown pass and breaks his collarbone [in Week 1 last season]. Then he came back and had a couple of rough games and not all his fault. A lot of times when the quarterback struggles, it’s on the quarterback. A lot of times when the quarterback has success, he probably gets too much credit. But Nick didn’t have a lot of opportunities to make some plays in some of these games that he failed in. The Tampa Bay game, he didn’t play his best football. Coach Marrone decided to get a spark and make something happen.” 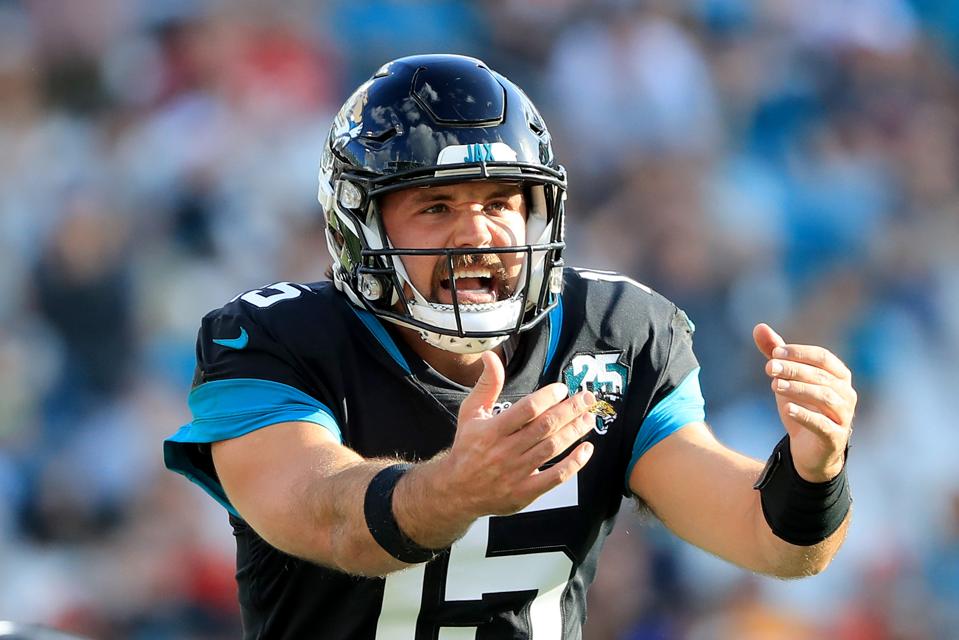 JACKSONVILLE, FLORIDA – DECEMBER 01: Gardner Minshew #15 of the Jacksonville Jaguars calls a signal … [+] during the game against the Tampa Bay Buccaneers at TIAA Bank Field on December 01, 2019 in Jacksonville, Florida. (Photo by Sam Greenwood/Getty Images)

“Gardner’s an exciting player and people tend to gravitate toward his personality and energy. Nothing against Nick. Nick’s still a great quarterback. They’re two different quarterbacks. Both of them have a lot to work with. Nick has a live arm, a strong arm, great pocket passer, accurate, played in big games, excelled in big games. Gardner has great energy. He has the “escapability” that you need nowadays in pro football because things aren’t always going to be perfect. And he obviously has the leadership skills that are necessary to be at that position. (Smiling) So, let the competition begin…

So what is it like preparing with out a definitive number one quarterback?

“You have to play the hand that’s dealt. You’d much rather go into a season knowing who your guy is because you can cater to him and really hone in on his skillset,” Gruden explained.

He recalled it became a challenge with the Redskins that the team had three quarterbacks (Colt McCoy, Case Keenum and Dwayne Haskins) because it was difficult to divide the reps between them. He also added having only two quarterbacks vying for one spot is a little easier.

“You can move the reps around and feature one guy one day and the next guy the next day – or go 50-50 the whole time. But definitely you would rather have one,” Gruden said. “We’ll play it out and ultimately Doug will have the final call. When he says, “This is our guy…” fine by me.”

Until then, Gruden said he is looking forward to seeing both Foles and Minshew compete for the starting role.

“Right now, at this time of year, it would be silly to say, “He’s our guy.” I think both of them should feel the need to compete and prove that they are the guy because I think both of them have the talent to be the guy, “Gruden said. “Now, it’s just a matter of which one wins.”

In the meantime, Gruden will continue to work on turning around the team’s sputtering offense. Until a starter is named he’ll build his offense around two quarterbacks instead of one.

US Manufacturing Executives Are Supportive Of Increased Tariffs...

Starting A Part-Time Retirement Business Before You Retire

Coronavirus Will Destroy The Box Office Whether Studios...

10 Observations About The Indiana Pacers At The...