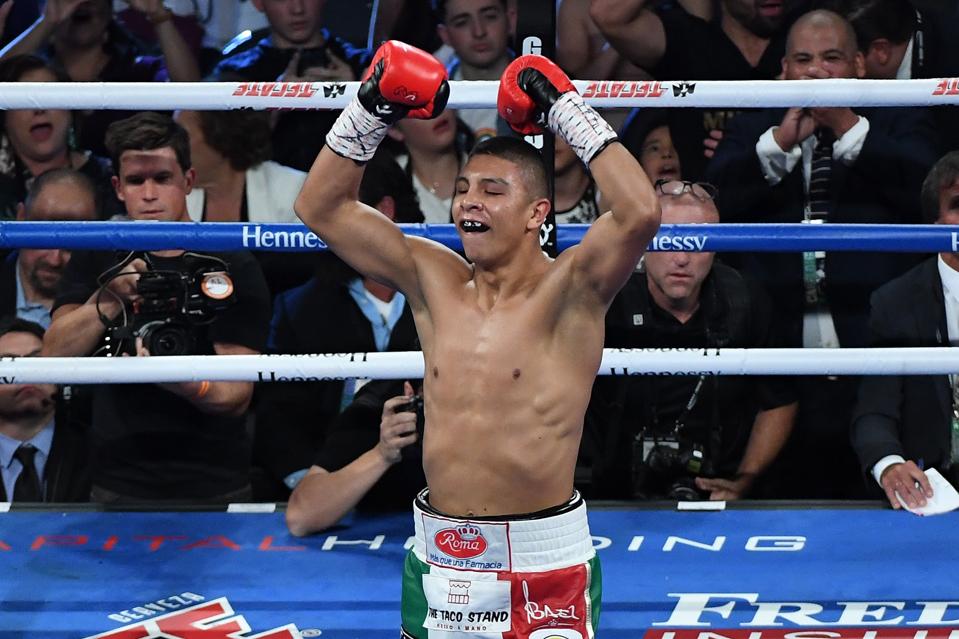 —It was quite a middleweight debut for Jaime Munguia (35-0, 28 KOs), as he used a hard jab and plenty of withering body shots to overwhelm Spike O’Sullivan (30-4) and ultimately stop him in the 11th round. The first half of the fight was close—in part, because Munguia was penalized a point for low blows in the sixth round (O’Sullivan also was badly hurt in the seventh by a body shot that strayed slightly below the beltline). But in the second half of the bout, Munguia—who, according to CompuBox, landed an impressive 50.5% of his power punches—was much faster, much stronger, and much more devastating with his jabs and combinations. In the 11th, O’Sullivan had a difficult time stopping Munguia from doing whatever he wanted, and just before O’Sullivan was knocked down, his corner threw in the white towel.

Asked afterward by DAZN to rate his 160-pound debut, Munguia said he’d give himself an 8 or a 9 (presumably out of 10), but he said he wore down less and he threw more punches as a middleweight than he did as a junior middleweight. Asked if he wanted to call anybody out, Munguia said, “I want to fight against the best of the division, whether it’s Canelo [Alvarez], [Gennadiy] Golovkin or the Charlo [brothers].” Okie doke, then.

—More than three years after scoring his last significant victory, a KO over Bernard Hopkins to send him into retirement, Joe Smith Jr. (25-3, 20 KOs) notched a victory against Jesse Hart (26-3) to keep himself in title contention. Hart looked mostly terrible, and he couldn’t do anything to stop Smith’s relentless pressure and solid right hand, which dropped Hart in the seventh round. The judges had it a split decision (97-92 and 98-91 for Smith and a horrendous 95-94 card for Hart; I also had it 98-91 for Smith). But that was good enough for Smith, who was about a 3/1 underdog before the fight. Said Smith, “I had to make a statement that I belong in this division.”

—Becoming the fastest fighter in boxing history, male or female, to win three world titles in three weight divisions, Claressa Shields (10-0, 2 KOs) dominated an overmatched Ivana Habazin (20-4) to win a pair of junior middleweight belts by unanimous decision on Friday night. Shields—who beat Vasiliy Lomachenko’s record of three titles in three divisions in 12 fights—scored the first knockdown of her career (the two TKOs on her resume came as the result of opponents who were stopped while on their feet) in the sixth with a nasty body shot. She later said she focused on the body in that round because she heard Andre Ward yell at her from the crowd to do so. “It wasn’t what I wanted,” said Shields, who clearly desired a knockout. “But I’m happy with the improvement. I dropped her with a body shot. This feels great.”

As for what’s next, Shields mentioned Elin Cederroos, who upset Alicia Napoleon-Espinosa on the undercard but didn’t seem all that jazzed about the possibility of facing Shields in her next fight. When Gray told Shields that Cederroos might not be ready for her, Shields quickly responded by saying, “None of them are ready for me.” So far, Shields has been right about that.

—Jaron “Boots” Ennis (25-0, 23 KOs) looked fantastic on the Shields-Habazin undercard, knocking down Bakhtiyar Eyubov (14-2-1) twice in the first round and landing tons of strong body shots and plenty of fast-handed hooks. Eyubov landed a number of his own flush shots in the second and third rounds, but after the third round, New Jersey state athletic board commissioner Larry Hazzard threatened to stop the fight. Eyubov’s corner, though, convinced him to let it go another round. But midway through the fourth, the ref stopped the fight, on Hazzard’s advice, even though Eyubov was still throwing and landing. Afterward, Ennis said “I got too hyped” in the first round and that he has to calm down. Asked by Showtime when he’d be ready to fight for a world title, Ennis confidently said he was ready about seven fights ago.

Did Rosita And Eugene Really Just Kiss In This New ‘Walking Dead’ Trailer?

VC Confessions – The Question You Should Ask All Your Potential Investors

Energy Waste: Can We Half Emissions At The...

Is The Future Of Real Estate In The...