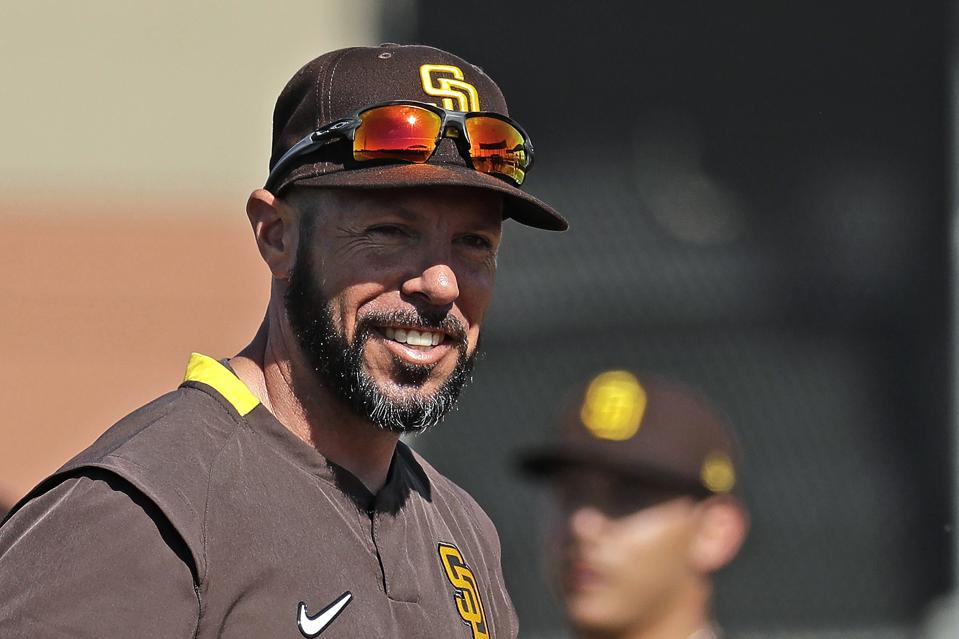 It’s time to turn the page on last season for the San Diego Padres, the past 51 seasons for that matter.

But leave it to the Padres to reinvent the baseball wheel.

Neither has any experience at any level as a manager. Oh yes, Bobby Dickerson is the bench coach.

Thursday, as the full squad of Padres worked out at the Peoria Sports Complex, Schumaker stood in for Tingler at the morning press briefing behind the clubhouse building and in front of a phalanx of cameras, a first in history pinch-manager.

We were told it will be a weekly occurrence to give Tingler a break and Schumaker some exposure, Thursday’s with Skippy so to speak.

Asked about his function as associate manager, Schumaker responded:

“Honestly, my goals are to cover Jayce’s blind spots.”

Those “blind spots” are still to be determined.

“We’re going to find out,” Schumaker said. “I don’t think there’s going to be too many. He’s on top of everything. I don’t anticipate too much. He’s a very bright, smart guy.”

You may have heard about Phil Wrigley’s college of coaches back in the early 1960s when he owned the Chicago Cubs. If Wrigley became upset with one guy, he’d go to another, using seven coaches to manage, during the 1961 and ’62 seasons.

The practice effectively was abandoned after the Cubs lost 193 games during those two seasons when morale in the clubhouse was so low even Ernie Banks didn’t want to play two. Banks compiled 56 home runs and 184 RBIs, but the future Hall of Fame shortstop couldn’t save them.

Call this Preller’s Triumvirate of Managers . The Padres as currently constituted have eight coaches. Not all of them may be able to dress for games. The Padres are awaiting that call from Major League Baseball.

“All staffs you want to have experience, guys with different areas of expertise,” Preller said Thursday after Schumaker’s debut. “We’ve got former managers in there who can help, guys who just came off the field, we’ve got some guys who’ve been around the organization and know the players really well.

“Managers get most of the attention, but it’s the coaches that are of huge importance. The coaches have as much impact on the players.”

Tingler is the 21st manager in the history of a franchise that was born into the National League along with the Montreal Expos in 1969. And that’s with Bruce Bochy and Bud Black managing 20-plus of those seasons.

Since then, they’ve been to the World Series twice – in 1984 and ’98 – having won just one game. They were 1-8 against first the Detroit Tigers, and later the New York Yankees.

Both American League squads just happened to be two of the top teams in baseball history.

And when the Washington/Montreal franchise won the World Series this past fall, that left the Padres alone from the NL expansion of the 1960s sans a World Series title. The New York Mets and Houston Astros had already won before them, as tainted as Houston’s 2017 success is by the electronic sign-stealing scandal.

The Padres haven’t been to the playoffs since 2006, the year Bochy departed for San Francisco. Bochy has retired, perhaps temporarily, after winning three World Series championship with the Giants.

And the Padres haven’t had a .500 season since 2010 under Black, now managing the Colorado Rockies where he’s been to the postseason once during his first two seasons there.

The Padres are 104 games under .500 since Preller took over as general manager on Aug. 6, 2014. But at least this spring starts with a semblance of a starting rotation, considering that Garrett Richards and Dinelson Lamet are healthy, Chris Paddack is no longer on a pitch or innings count, and Zach Davies has been acquired as a decent middle of the rotation addition.

Last spring, A.J. sent Green into camp with none of the above and no veteran starting pitchers. It was a recipe for burning out the bullpen and eventual disaster. Both happened, as the overall pitching had an 18th in MLB worst 4.60 ERA and the relievers were 19th at 4.56.

The latter ERA was that low only because closer Kirby Yates had a 1.19 ERA and 41 saves in 60 2/3 innings. It could have been much worse.

The Padres collapsed under the weight of it all and though 45-45 at the All-Star break, finished with losses in 47 losses of their final 72 games to finish last in the NL West 36 games behind the Los Angeles Dodgers.

In September, Green lost the clubhouse and was fired with a week to go in the season. He’s now bench coach for the Cubs under David Ross, who’s never coached at any level let alone managed.

What could go wrong?

The Padres go into the spring looking for an answer in center field and with the Triumvirate of Managers.

“Skip will probably be considered my right-hand man,” Tingler said the other day. “But I’m leaning on [all the other] guys for a lot things. I’m going to be leaning on them for their experiences, certainly inside their areas and outside their areas as well. I view us as one, as a team.”

That team needs at least 90 wins to make the playoffs. Catching the bulked-up Dodgers with Mookie Betts and David Price added to the talented mix that has won seven consecutive division titles may be too much to ask. So may a run at a Wild Card berth.

A .500 season would be a nice improvement despite owner Ron Fowler’s dictum that the Padres have to win this year or heads will roll, including his.

Preller said he doesn’t have a projected win total.

“From our standpoint it’s just what we can control,” Preller said. “Usually when you do that, and you play good baseball other things take care of themselves. We’ll see how that plays out for us down the road.”

I’ve turned the page and am willing to see how it all turns out. Let’s hope for once it’s not a long and winding road.

Which of My Competitor’s Keywords Should (& Shouldn’t) I Target? – Best of Whiteboard Friday