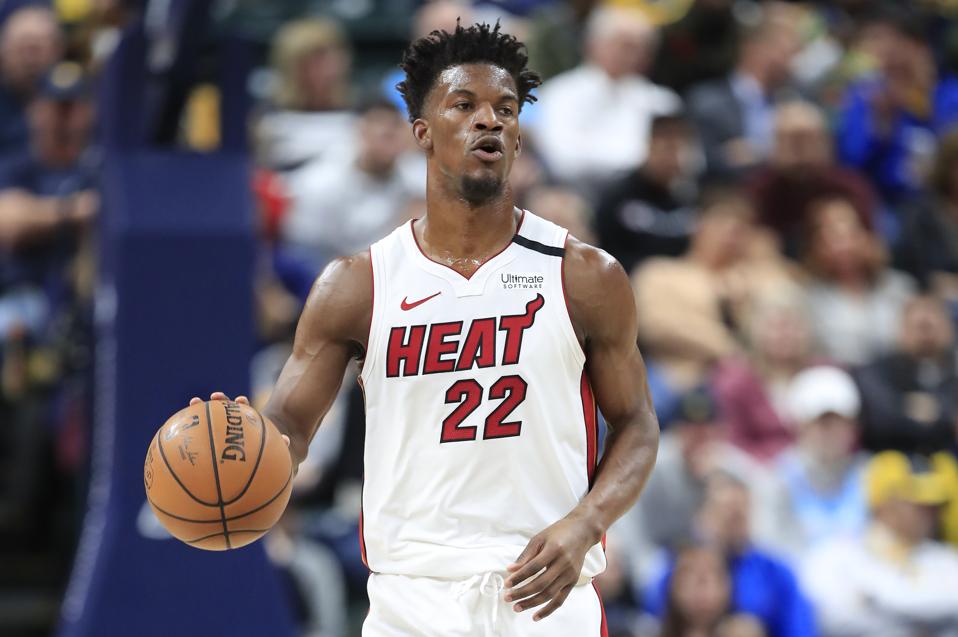 INDIANAPOLIS, INDIANA – JANUARY 08: Jimmy Butler #22 of the Miami Heat dribbles the ball against … [+] the Indiana Pacers at Bankers Life Fieldhouse on January 08, 2020 in Indianapolis, Indiana. NOTE TO USER: User expressly acknowledges and agrees that, by downloading and or using this photograph, User is consenting to the terms and conditions of the Getty Images License Agreement. (Photo by Andy Lyons/Getty Images)

The Miami Heat are currently sitting pretty in the Eastern Conference, ranking second behind Milwaukee at 29-12 midway through the season and looking like a proper Conference Finals contender.

Part of it is the evolution of Bam Adebayo, who has stepped up to the tune of 15.9 points, 10.4 rebounds, and 4.6 assists in his third NBA season, as well as the surprising contributions from rookies Tyler Herro and Kendrick Nunn, and second-year man Duncan Robinson. The latter trio has been responsible for 36 percent of Miami’s points this season, and made 294 three-pointers on the year.

But even with Miami’s impressive contributions from their star center and role players, the biggest change from last season to this has been the arrival of superstar Jimmy Butler.

The 30-year-old signed a four-year contract worth $142 million last July and has been worth every penny so far. Butler has functioned as the team’s primary ball-handler and play initiator, racking up 6.4 assists per game to go along with a healthy all-around line of 20.3 points, 7.0 rebounds, and 1.9 steals. Only he and Russell Westbrook are averaging over 20 points, seven rebounds, six assists, and 1.5 steals on the year, a feat only accomplished by Michael Jordan, LeBron James, Magic Johnson, Larry Bird, Grant Hill, Scottie Pippen, and the aforementioned Westbrook before.

What sets Butler apart from other leading scorers, is his lack of shooting volume. Butler takes just 13.3 shots a game, a ridiculously low number for someone who’s cracked the 20-point average. In fact, only nine players in NBA history have succeeded in averaging 20+ points on 13.5, or fewer, shot attempts over a full season.

Butler has found a way to bump up his scoring by getting to the free throw line ad nauseum. He attempts 9.4 freebies a night, which he converts at an 82.3 percent clip. His playmaking, and the shooting around him, has provided him with the space necessary to get himself to the rim, where he’s crafty enough to take contact and draw fouls.

In 36 games played this season, Butler has drawn 146 shooting fouls. That’s just nine away from what he drew all of last year, in 29 more games.

For Butler, this was always the right approach to build around him. The Bulls and Timberwolves failed to surround him with enough shooters to ever optimize his game, but the Heat has made it a priority to open up the game for him, which in turn has provided Butler with the luxury of choice.

In earlier years, Butler was forced to complete drives and get all the way to the basket, simply due to a general lack of shooters around him that he could pass to when collapsing the defense. Now, with Robinson, Nunn, Herro, Goran Dragic, Kelly Olynyk, and even Meyers Leonard around, Butler can choose his approach and plan ahead. If the defense collapse early and leave one of the above shooters open, he can swing it. If no help comes, Butler will use his chiseled 6’8, 235-pound frame to bulldoze himself into defenders.

Even dating back half a decade, it was obvious that Butler possessed some passing chops. He’s sported AST% of over 20 in four of his past five seasons, and averaged 5.0 assists over that period. This year, he’s posting an AST% of 28.3 which aligns well with most point guards.

Robinson, who makes 3.2 three-pointers a night, is being assisted on 31.2 percent of them by Butler alone. Nunn is hitting 49.7 percent from the field off Butler passes, including 39.7 percent from deep.

Where Butler could stand to make some improvements is converting off passes he receives. Butler converts on less than 40 percent from the field on passes from every player on the roster, except Nunn (42.4 percent). While Butler has never been your typical spot-up shooter, it’s crucial he can be reliable when spotting up especially when the playoffs roll around and defenses are getting more tight.

The same can be said of his three-point shot, which has dropped to 27.1 percent on the year, albeit on low volume.

Outside of that, it’s difficult to find significant concern with Butler’s contributions. He remains a pesky on-ball defender who is more than happy to ruffle feathers, and is yet again the emotional leader on a team making their ways into the playoffs. He should also have a pretty strong All-NBA/All-Defense case to make in a few months.

Butler will be charged with prepping an otherwise young Heat squad for the pressures of the post-season, and if his personality is any indication, he’s ready for that challenge.

Is The End Of June Soccer’s Biggest Problem...

Arsenal And Everton Both Reaping Rewards After Bold...