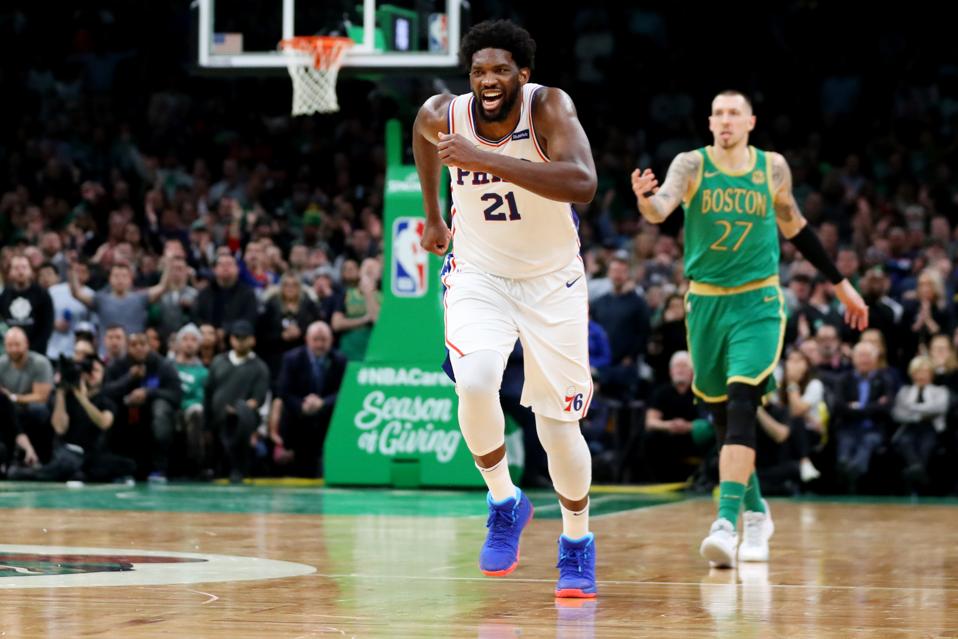 BOSTON, MASSACHUSETTS – DECEMBER 12: Joel Embiid #21 of the Philadelphia 76ers celebrates after Josh … [+] Richardson #0 was fouled in the fourth quarter of the game against the Boston Celtics at TD Garden on December 12, 2019 in Boston, Massachusetts. The 76ers defeat the Celtics 115-109. NOTE TO USER: User expressly acknowledges and agrees that, by downloading and or using this photograph, User is consenting to the terms and conditions of the Getty Images License Agreement. (Photo by Maddie Meyer/Getty Images)

On Tuesday, Basketball Hall of Famers Charles Barkley and Shaquille O’Neal questioned whether Philadelphia 76ers All-Star center Joel Embiid had the mentality to dominate on a nightly basis.

Two nights later, he resoundingly answered that question during the Sixers’ 115-109 road victory over the rival Boston Celtics.

Embiid went off for a season-high 38 points on 12-of-21 shooting, 13 rebounds, six assists and a game-clinching block in 36 minutes. He was aggressive from the jump, scoring or assisting on four of the Sixers’ first five baskets, and he went 5-of-6 from the charity stripe in the final 30 seconds to stave off a potential Celtics rally.

On Thursday morning, Embiid addressed the criticism that Barkley and O’Neal levied at him during Tuesday’s episode of Inside the NBA, admitting that they had a point.

Embiid noted that he’s focused on getting to the playoffs healthy, as a knee injury hobbled him throughout last year’s postseason run. While he didn’t outright say it, he seemed to allude that he would be running on fumes by mid-April if he went all-out every night during the regular season.

A game against the division-rival Celtics—which could potentially factor into playoff positioning—provided Embiid with some extra motivation Thursday night.

The Celtics are tailor-made to give the Sixers’ offense fits, as they average only 13.5 turnovers per game, the third-fewest leaguewide. The Sixers are at their best in transition, but they often struggle to generate easy looks in half-court sets. Interchangeable wings such as Jayson Tatum, Jaylen Brown and Gordon Hayward often limit Ben Simmons’ effectiveness in the half court, and Simmons had another clunker Thursday with only seven points of 2-of-6 shooting.

That put the offensive burden on Embiid’s shoulders, and the big man was ready to answer the bell.

The Sixers repeatedly sought to pound the ball down low with Embiid, who leads the league with 8.0 post-up possessions per game. While Embiid can get sloppy with his dribble and commit careless turnovers on such plays, he finished with only two giveaways against the Celtics.

On the first play, Embiid established deep position in the post against Celtics center Enes Kanter. Sixers wing James Ennis III fed him down low and then ran baseline, clearing out that side of the floor for Embiid to ensure he wouldn’t face an unexpected double-team.

The Celtics wound up sending three defenders at Embiid as he attempted to back his way to the basket—point guard Brad Wanamaker and Hayward both cheated over—but it was no match for the big fella, who dropped in an eight-foot hook shot over Kanter’s outstretched arm.

On the next trip down the floor, the Sixers appeared to be running the same play at first. Embiid again established position against Kanter near the low block, and Ennis again fed him the ball and began running to clear out his defender.

But as Celtics forward Semi Ojeleye cheated over to temporarily double-team Embiid, the big man fed a wide-open Ennis under the basket for an easy deuce.

When opponents decide to single-cover Embiid, he’ll more often than not get the best of them, as Denver Nuggets backup center Mason Plumlee learned the hard way Tuesday night. But Embiid’s growth as a passer out of double-teams has been particularly notable this season, as quick ball movement can catch a defense out of position and create a wide-open shot in the half court.

When all else fails, being taller than everyone on the court, corralling an offensive rebound and then throwing down a thunder dunk in the midst of three defenders also works.

Although single-game plus/minus is often a flawed metric—one big run can skew it either positively or negatively—Embiid’s plus-21 on Thursday night sounds about right. With Al Horford sidelined by a hamstring/knee injury and backup center Kyle O’Quinn proving no match for Kanter (he was a team-worst minus-15), the Sixers needed the MVP version of Embiid that he promised he would be heading into the year.

Whether fueled by Barkley and O’Neal’s criticism, longstanding disdain for the Celtics or a combination of the two, the version of Embiid that showed up in Boston on Thursday is the one the Sixers will need to win a championship this year.

UFC 245 Preview: A Look At The Record Stats For Max Holloway Vs. Alexander Volkanovski

BTS Earned The Only RIAA-Certified Korean Album And...

How To Find The Right Shareholder Relationship Management...

As Boston’s No Name Restaurant Closes, Why Some...

Revolutionizing Mobile Gaming With Game.tv: A Conversation With...