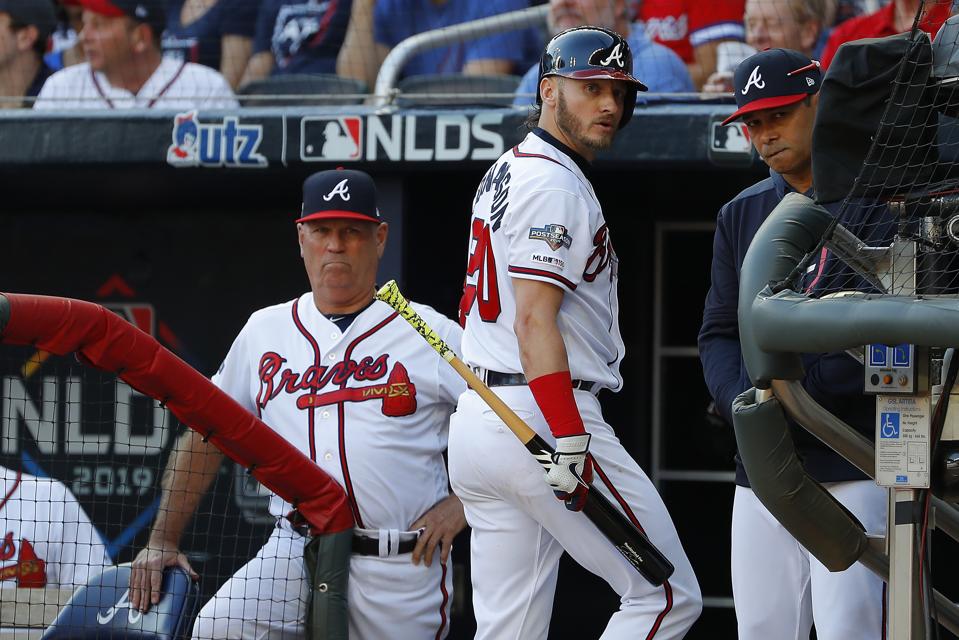 ATLANTA, GEORGIA – OCTOBER 09: Josh Donaldson #20 of the Atlanta Braves reacts after being called … [+] out on strikes against the St. Louis Cardinals during the first inning in game five of the National League Division Series at SunTrust Park on October 09, 2019 in Atlanta, Georgia. (Photo by Kevin C. Cox/Getty Images)

With just a month left before position players report to spring training, Josh Donaldson remains a man without a position.

The Atlanta Braves, his team last year, offered him a position – cleanup hitter and third baseman. But the Braves are not the highest bidder in the Donaldson sweepstakes and probably won’t be.

The Washington Nationals, who rode victory in the wild-card game to their first world championship, would like nothing better than to have Donaldson replace free-agent deserter Anthony Rendon, who led the league in runs batted in before jumping to the Los Angeles Angels.

Donaldson could be even more productive up the road in Philadelphia, where Citizens Bank Park is a bandbox that rivals Wrigley Field with the wind blowing out. And the New York Mets know they could get much-needed thump in their lineup by having Donaldson at third rather than Jeff McNeil, Jed Lowrie, or Todd Frazier. 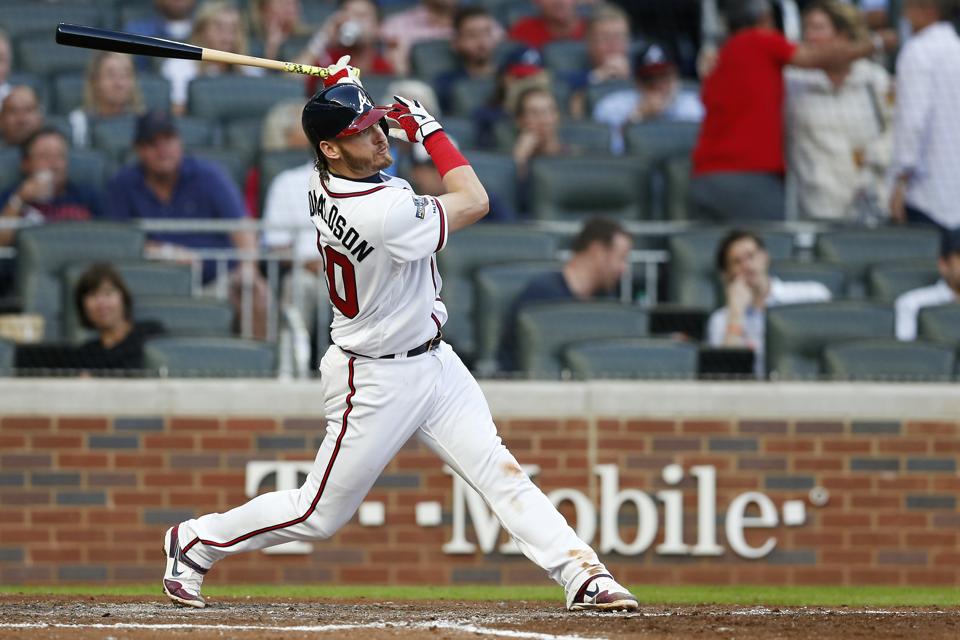 ATLANTA, GA – OCTOBER 09: Josh Donaldson #20 of the Atlanta Braves hits a solo home run in the … [+] fourth inning during Game 5 of the NLDS between the St. Louis Cardinals and the Atlanta Braves at SunTrust Park on Wednesday, October 9, 2019 in Atlanta, Georgia. (Photo by Mike Zarrilli/MLB Photos via Getty Images)

Should the Nats, Phils, or Mets ink the former American League MVP, they would also be performing addition by subtraction – taking a key cog out of the lineup of the NL East champions just before they launch their bid for a third straight division title.

Also in the picture, though somewhere on the periphery, are the Los Angeles Dodgers and Minnesota Twins, both of whom have incumbent third basemen.

The Dodgers have the money to sign Donaldson and the willpower to move Justin Turner to second base, first base, or even another team. Likewise, the Twins say newly-signed Miguel Sano would shift to the opposite corner of the diamond to accommodate Donaldson.

Then there are the St. Louis Cardinals, who no longer favor Matt Carpenter at the hot corner, and the New York Yankees, who always have $100 million or so to spend on a whim.

For all those possible suitors, there are potential problems. Donaldson is 34, has an injury history, and may never have another season as the one he had in 2019, when he had something to prove. 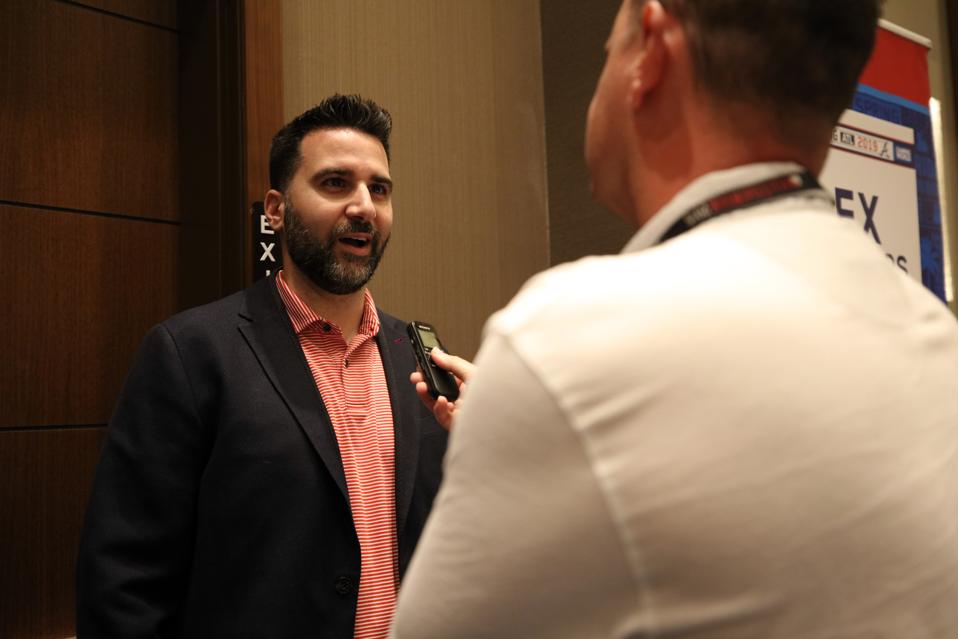 The Braves got him because general manager Alex Anthopoulos, who had him in Toronto, gambled $23 million that Donaldson would return to top form if he stayed healthy. It was the biggest one-year contract ever bestowed on a free agent.

Now, after watching fifth starter Zack Wheeler pull down $118 million from the Phillies and the fading Madison Bumgarner land $100 million and a five-year pact from Arizona, Donaldson wants a larger piece of the pie.

He and his agent have already managed to squeeze four-year offers out of the Nats, Braves, and Twins, but their request for $110 million seems to be a bigger stumbling block.

Even though the Braves have the location and training staff he prefers, Anthopoulos pulling the strings, and proximity to his southern roots, Donaldson is persuing a strategy diametrically opposed to the one he employed last winter.

Instead of being the first major star to sign, as he was in 2019, he’s now the last. Gerrit Cole, Stephen Strasburg, Rendon, Bumgarner, and Wheeler all signed before or during the Winter Meetings in San Diego. 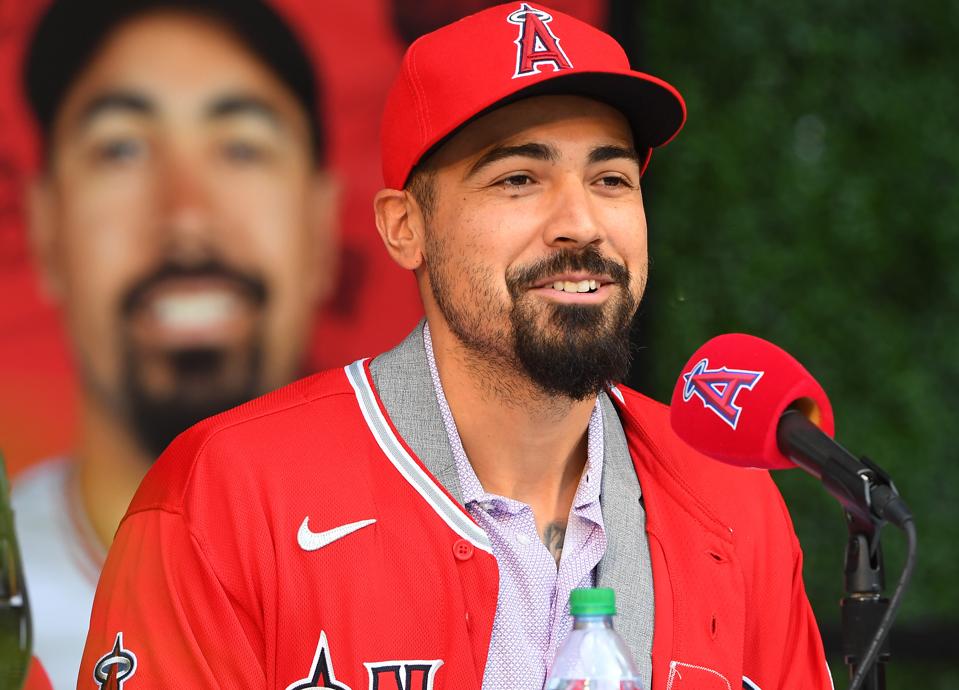 It’s not likely he’ll hold out as long as Manny Machado and Bryce Harper did last spring but anything is possible.

The danger is that Braves fans, in growing numbers, believe he’s holding the team over a barrel – not only by demanding more in years and dollars than a 34-year-old deserves but also by threatening to jump to one of three Braves rivals who could become the prohibitive divsion favorite if they land him.

Popular in both the clubhouse and the stands last year, Donaldson is viewed in some circles as the poster boy for greed and avarice. Does he really need the extra $10 million he’s apparently demanding in excess of his first nine-figure contract?

It would seem that a clever contract could be signed with enough incentives to compensate for the dollars that are not guaranteed. It has long been common practice in baseball to provide bonuses for making the All-Star team, winning the Gold Glove, knocking in 100 runs, or even playing 140 games.

With the designated hitter likely to come to the National League in 2022, the first year after the new Basic Agreement between labor and management, any team that signs Donaldson would need him in the field only for this year and next. After that, he could become a full-time DH.

For the Braves, that means Austin Riley, a much younger version of Donaldson, could spend most of this year in the minors, learning to make better contact, and next year as a swing man who can spell Donaldson at third and Freddie Freeman at first, fill in at both outfield corners, and provide potent righthanded power in the pinch when needed.

Atlanta has explored trades for Kris Bryant of the Cubs, Nolan Arenado of the Rockies, Evan Longoria of the Giants, and Carpenter but would have to surrender several gems from its bountiful farm system and risk losing the veteran acquisition through free agency or contractural opt-out clauses within a few short seasons of his arrival. 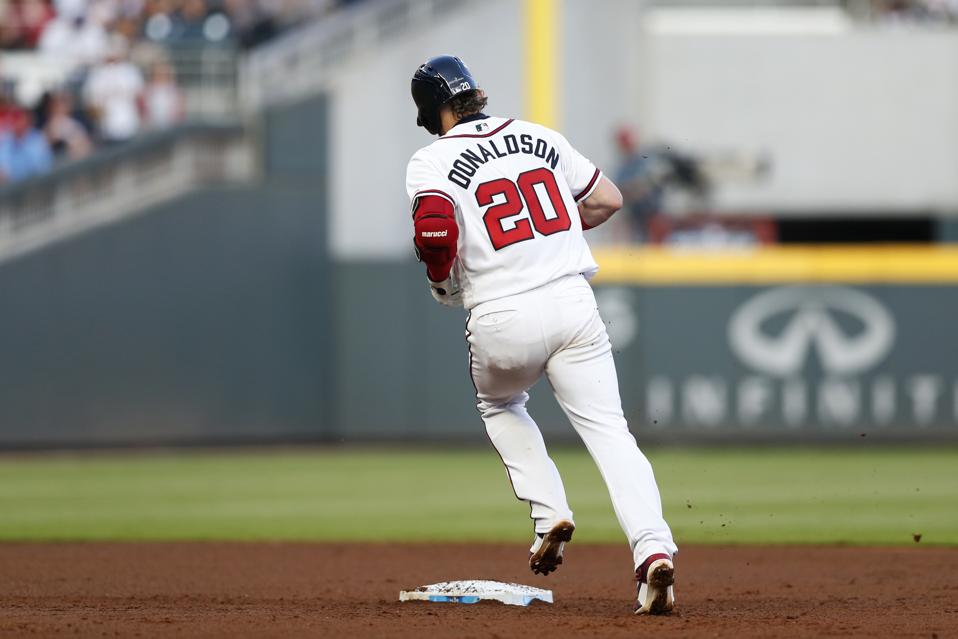 ATLANTA, GA – OCTOBER 09: Josh Donaldson #20 of the Atlanta Braves rounds the bases after hitting a … [+] solo home run in the fourth inning during Game 5 of the NLDS between the St. Louis Cardinals and the Atlanta Braves at SunTrust Park on Wednesday, October 9, 2019 in Atlanta, Georgia. (Photo by Mike Zarrilli/MLB Photos via Getty Images)

A much better bet would be to sign Donaldson, who has told the Braves they would have a chance to match anyone else’s bid before it becomes official. Although the Braves are owned by Denver-based Liberty Media, where CEO John Malone is worth an estimated $7 billion, they already have the highest projected payroll in team history at $153 million. And that’s even without unsigned relief pitcher Shane Greene, whose arbitration case is still pending.

To pare payroll and presumably make room for Donaldson’s dollars, the team could trade Greene, starting pitcher Mike Foltynewicz, and outfielders Ender Inciarte and Adam Duvall – but won’t do so until the third base situation is settled. In the meantime, continuing the staring contest is risky.

The Phillies, anxious to return to contention after admittedly spending “stupid money” to rebuild last winter, have already added Wheeler, ex-Yankee shortstop Didi Gregorius, and manager Joe Girardi. The Nationals, buoyed by the Lerner supermarket fortune, have added more free agents than any team in baseball. And the Mets, with billionaire Steve Cohen about to become majority owner, want to make a big splash in a big way, showing they can compete with the crosstown Yankees as well as their NL East rivals.

So what logo should Topps put on its 2020 Josh Donaldson card? Even The Shadow doesn’t know for sure.

How To Make An IoT Partner Channel Strategy Pay

How To View An “Insulin Resistant” Economy

Is This The Year To Actively Trade Down...

Watch Out For China’s Currency In Case Of...

A Bold Framework For “Emergency Economics” To Combat...