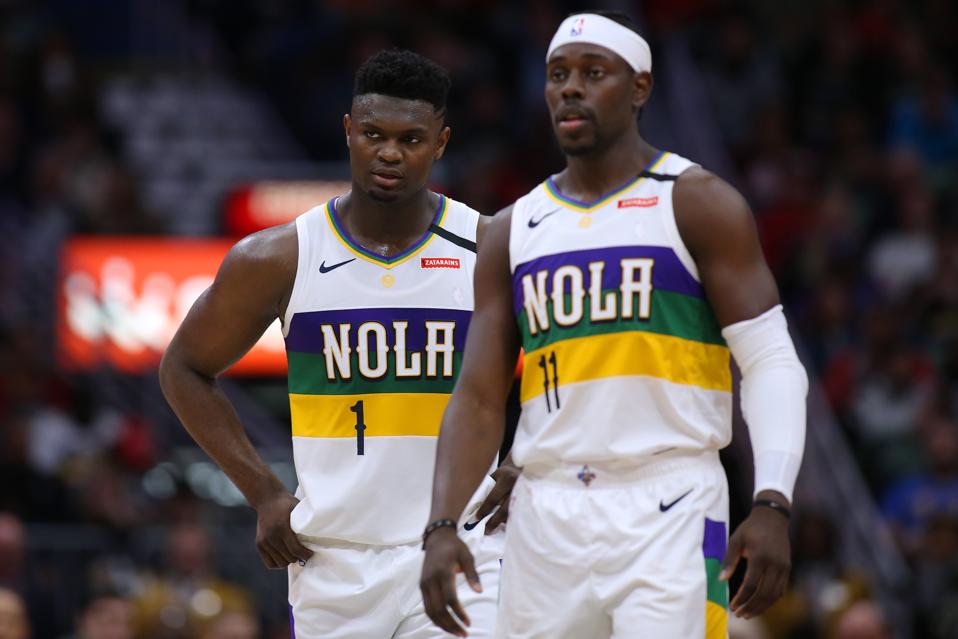 NEW ORLEANS, LOUISIANA – FEBRUARY 04: Zion Williamson #1 of the New Orleans Pelicans and Jrue … [+] Holiday #11 react against the Milwaukee Bucks during a game at the Smoothie King Center on February 04, 2020 in New Orleans, Louisiana. NOTE TO USER: User expressly acknowledges and agrees that, by downloading and or using this Photograph, user is consenting to the terms and conditions of the Getty Images License Agreement. (Photo by Jonathan Bachman/Getty Images)

Brandon Ingram represented the New Orleans Pelicans at the NBA All-Star Game. Zion Williamson represents the future of New Orleans basketball and is the odds on favorite to replace Lebron James as the face of the league. Nothing around this team is considered without mentioning Williamson. Jrue Holiday though? He is still the obvious leader of these 2019-2020 New Orleans Pelicans.

This Pelicans team is playing for their postseason lives. While Holiday is overshadowed by bigger stars and perhaps gets overwhelmed in the biggest of moments, he is still the guy other players continually defer to through the doldrums of the long regular season. In the locker room and media sessions after games, he remaims calm, win or lose. It’s a long season, and despite a slow start, Holiday is making sure the team does not slip up in the pursuit of the playoffs.

After leagues in the NBA, Ingram is a reserved guy who speaks who seems to prefer to just do the job of a prototypical wing scorer. No need to be bothered with much else besides wins and winding down. Williamson is the louder rah-rah speech at halftime leader for the Pelicans. It is to be expected that a literal teenager is pumped up about winning an NBA game. Alvin Gentry even relayed that Williamson gave a halftime speech against Golden State. Williamson was even giving speeches before he could actually play.

Gentry said after the game, “(Zion Williamson) basically just said, ‘Hey, let’s go. We gotta play the way we are capable of playing.’ We have to have some kind of way to establish some consistency in how we are going to push the play and how we play. He is not your typical 19-year-old. He’s a very mature kid, very respectful of his teammates and they are very respectful to him as well. He is all about winning. Just winning. He’s just a unique kid and the way he approaches the game.”

Holiday is more of the actions speak louder type. At practice in the days between the loss to the Lakers and hosting the Cleveland Cavaliers, Jrue Holiday said about the team’s energy, “Since Zion has been back, he’s kind of been the energy guy. The kind of teams that we are supposed to beat, that comes a little bit from the vets. Just knowing these are the games we have to win, no excuses. It’s just a matter of guys wanting to win basketball games.”

Holiday is the main veteran voice in the locker room. Ingram said after the February 23 road win against last-place Golden State, “I mean (Holiday) led our team. He and Zion (Williamson) led us to victory tonight and did a good job of finding the mismatch and going downhill. If he didn’t have the shot, he would kick it out to the guy that would have the shot.”

That road win against a struggling Warriors team was practically a must-win game coming out of the All-Star break. The playoff race is too close to pretend otherwise. Holiday wrapped up the win like a consummate professional. However, he is the first to admit he helped fumbled away the home game against Oklahoma City.

In the three games before the NBA All-Star break, Holiday put up 31 points, dished out 10 assists, and grabbed 6 rebounds and 3 steals in Indiana. He took a win from his brothers’ home floor. He came home and gave the Portland Trail Blazers another loss while posting a 16 points, 10 assists, 4 rebounds, 2 steals, 2 blocks stat line. He kept the team reasonably close in the loss to Oklahoma City with 14 points, 11 assists, and 6 rebounds but had a couple of crucial turnovers in the fourth quarter.

The Pelicans were playing without Ingram in that loss to the Thunder. Chris Paul has that team two games back from the fourth seed. New Orleans needs all three of Ingram, Williamson, and Holiday playing good-to-great basketball to have a chance against the best teams. Against Portland and the Pacers? Jrue Holiday had little problem dispatching those mediocre teams without Ingram, though he does not want to do so often.

The Pelicans won their second road game running when they visited Portland after the All-Star break. With Ingram, the team won comfortably on the road. Holiday ended the night with 20 points, 9 assists, 4 rebounds, and 4 steals. He shot 50% from the field, including 4/6 from three-point range.

There is a sense in media circles that this healthy Pelicans squad could potentially upset any team in the west, besides perhaps the Los Angeles Lakers. Jrue Holiday is leading the total team effort path to the playoffs to prove that assumption wrong. He does so by setting the tone on defense, his pride and joy.

Holiday said on the most recent JJ Redick podcast “I just like defense, and I always have, and I feel like people don’t. I like defense just as much as offense. I guess if you think of it that way then, yeah, but I’m not going to lie, it’s so much harder. It’s so tiring. All the time. Then you’re playing against (Kevin Durant). He is seven feet tall. What are you supposed to say? Or when he was on Golden State, and there were plays where I’d switch from KD, to Klay, to Steph, then back to KD…and I still have to score. But I love it now, we have JJ Redick. I don’t need to score anymore, I can just play defense and then give them a ball. I tell him all the time, I’m the best screener. I’ll set a screen and then let JJ come off it to shoot the ball…”

Alvin Gentry said after the win at Golden State, “Not only offensively but, I thought Jrue (Holiday) did great defensively and he kind of set the tone for us in the second half. We just gotta learn to be focused and start the game the right way so that we aren’t playing behind during any stage of the game.”

Holiday might not be the top-end NBA MVP talent to lead the team to victory in the biggest games. The Pelicans do not need him to be that player; they only need him to be himself. He is arguably the most tenacious on-ball defender in the league, per Redick as an opponent. Dame Lilliard and Devin Booker can attest to his perimeter hounding as well. None other than Lebron James praises Holiday’s fundamentally sound yet pugnacious approach to guarding the post.

That is Holiday’s forte and the foundation this franchise needs going forward. Holiday might not be worth a four-year contract with a raise on his current contract but he should maintain his current salary. He will make a few thousand less than $27 million this season and just over $26 million next season. He has a player option for another $27 million for the 2021-22 season which he will likely decline.

Holiday is respected by anyone associated with the NBA. Gracious to everyone to a fault, he is the humble heart of the team. He still has a few years of premium production to give. This summer’s free-agent class is short on top-end talent. Next summer will be a frenzy of high-class free-agent pursuits. Holiday will want to time his free agency to get the best deal. Holiday could be the most established star available at a decent price the next few summers. New Orleans will want to avoid a bidding war or will look to cash in on Holiday before losing him for nothing.

Holiday should not be asked to take much of a team-friendly discount. His leadership role and on-court talent are still too valuable to the franchise going forward. Holiday will be 30 years old next season. League revenues are growing. He has one big payday remaining in his NBA playing career. The player and franchise have stuck together through some tough times.

Both Holiday and the team should see the benefits of agreeing to see this championship project through until the end. trade rumors would all but cease and the front office would have a clearer picture of the team’s core and cap sheet moving forward. During that time, Holiday will have a chance to mentor two stars that could lead him to a title but would most definitely lead to Holiday’s jersey being hung in the rafters.

A proper legacy for a proper leader. Chris Paul was the first (only) bonafide star leader of the Hornets, New Orleans edition. Jrue Holiday is the first of many leaders of the Pelicans brand of New Orleans basketball. When he first heard of the trade, Holiday was wary of the city.

“I thought it sucked before I lived there, and now I live there it’s one of the coolest cities in the world. [on the road] I stayed in my hotel room, I thought it was super dirty, you know like Bourbon Street.”

Now Holiday feels “ it’s one of the coolest cities in the world.” Holiday has earned the right to not be the sacrificial offering to another process. He has also earned the security of a contract extension. David Griffin and the rest of the front office must see that even though Holiday may not lead the charge to a championship, that is up to Williamson and Ingram, he would be the parade’s unofficial Grand Marshall.

Because even though Holiday may never make another All-Star team or be seen as the future of basketball, he has been the most loyal and beloved player in franchise history. A quiet leader who gets the job done and requires little credit, Holiday embodies Pelicans’ basketball and represents the city as the city sees it’s self. Holiday does not need to shout at players to get a reaction. Just his presence on the court makes players want to play in a more refined and focused fashion.

A silent resolve that success will come because the work to seize the opportunity was completed. In short, Leadership.

Traveling Hopefully – Is There Room For Disruption In A Mature Online Hotel Booking Market?

Houston May Finally Get Its Own Super Bowl...

How MLS And Liga MX Could Make Future...