In the recently released Global Go To Think Tank Index, Argentina has one of the highest ratios of think tanks to population. The index ranks the country fifth in the world in number of think tanks – five times more per capita than Japan, and twice as much as Canada. Unfortunately, Argentina remains an economic basket case, with many analysts expecting another default of its foreign debt soon. Defenders of the free economy, like me, can retort the mere existence of think tanks is not enough: To help liberate an economy, think tanks that promote free markets are inherently necessary. But that too seems insufficient. Though Latin America has a high concentration of free-market think tanks, their recommendations are often stifled by politicians and business allies with little interest in free economic competition. 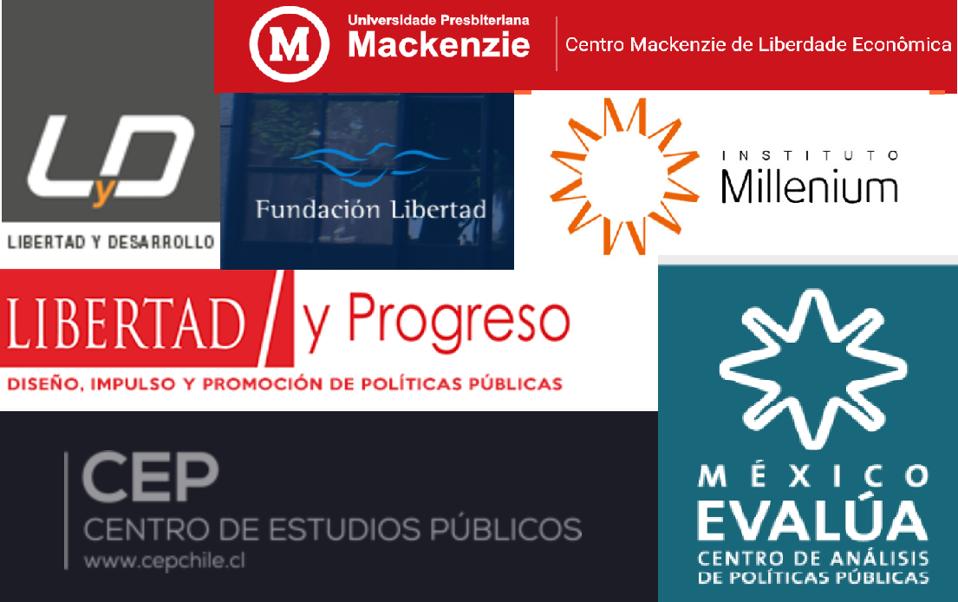 If I count correctly, the 2019 Go To Index shows that 26% (22 out of 86) of top-ranked think tanks in Latin America are favorable to a free economy. This is higher than in the United States, where approximately 18 % tend to be consistently pro-market (20 out of 109). Given Latin America’s diversity, free-market think tanks react differently to the challenges each country faces (though, it must be said, weak judicial institutions and a weak rule of law are prevalent throughout the region).

Starting with Brazil, the region’s largest economy, we see what many would call a free-market “dream team” in government. Minister of the Economy Paulo Guedes, a University of Chicago-trained economist who incorporates also the insights of Austrian economists like Friedrich Hayek and Ludwig von Mises, has assembled a superb team. The task of free-market Brazilian think tanks therefore is to provide intellectual ammunition to maintain the current consensus. This is being done through traditional think tank work and also through parallel efforts. A publisher, LVM Editora, seized the moment that brought Jair Bolsonaro to power to greatly expand its offerings of books favorable to a free society. LVM is an acronym for Ludwig Von Mises, which gives an idea of the publisher’s goals. LVM currently lists 50 pro-free-society books in its catalogue and aims to publish 30 titles in the next 12 months. 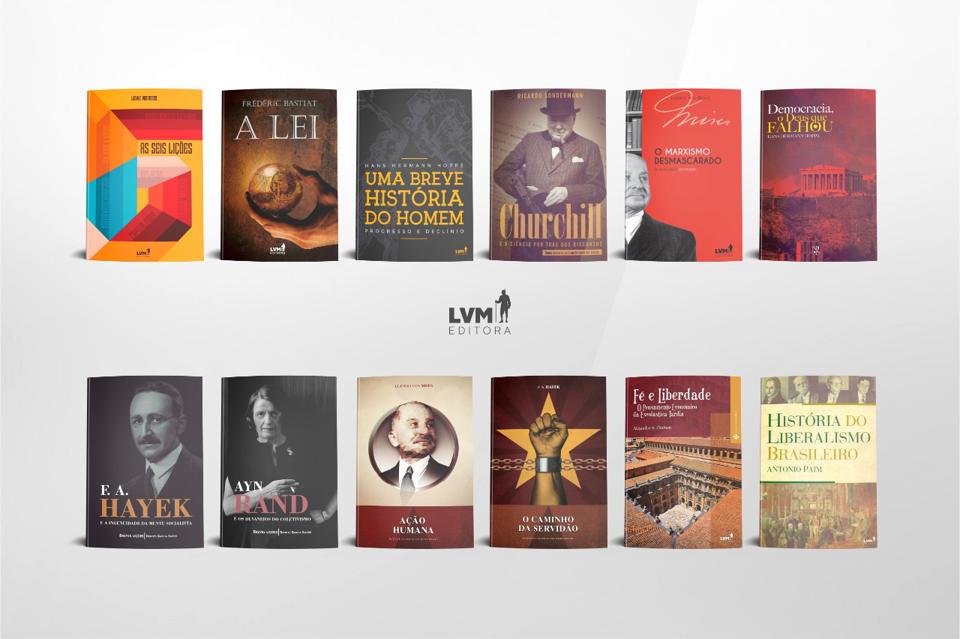 From Churchill to Von Mises, and from Ayn Rand to Christian Authors, LVM Editora is feeding the … [+] Brazilian market with books favorable to a free economy

In São Paulo, the Center of Economic Freedom at the Mackenzie Presbyterian University has been doing pioneering work. Through its research and university location, it helps connect think tanks, academics and policymakers. The Center produces the Index of Economic Freedom of Brazilian States, which builds on the groundbreaking work of the Fraser Institute in Canada. Neither the Mises Institute nor the Center of Economic appeared in the 2019 Go To Index, but should be on the minds of all who work for a free economy and have an interest in Brazil.

Another Brazilian group, Instituto Millenium, was one of the few Latin American free-market think tanks to have one of its studies listed in the Global Go To Index. The study’s title translates to “Pensions, public sector, poverty and inequality” and shows how the system inherited by the Bolsonaro’s government increases inequality and poverty.

In Mexico, Latin America’s second-largest economy, several think tanks and policy experts continue to do valuable independent work. But the powerful alliance of big government and big business crowds out the work of think tanks. Mexico has five pro free-market groups ranked in the index, with México Evalúa-CIDAC at the top. I have mentioned this think-tank recently and I am a longtime admirer of their objective analyses. México Evalúa translates as “Mexico Evaluates,” showing the group’s preference for measurements over ideology. Another Mexican group, Caminos de Libertad, has been rewarding outstanding Latin American champions of the free economy. It does this through an essay contest, mostly for younger writers, and through a six-figure monetary award given to major promoters of a free economy. Recipients of this award include well-known figures such as former Spanish Prime Minister Felipe González and Nobel Laureate Mario Vargas Llosa; as well as lesser-known honorees who have devoted their lives to promotion of a free society, such as Dora de Ampuero, founder of the Instituto Ecuatoriano de Economía Política think tank in Ecuador, and Armando Ribas, a Cuban-Argentine intellectual who has collaborated with many free-market organizations. A contradiction that could come back to haunt the Latin American free-market movement is that Caminos de Libertad’s founder and major funder, Ricardo Salinas Pliego, is the businessman I mentioned in a recent article as having close ties to the Mexican government and receiving special privileges such as lucrative no-bid contracts. Mexico has outstanding business potential and outstanding entrepreneurs, but so far there has not been a political leader who can help change the course of the country by rising above the powerful special interests and defeating the drug cartels. 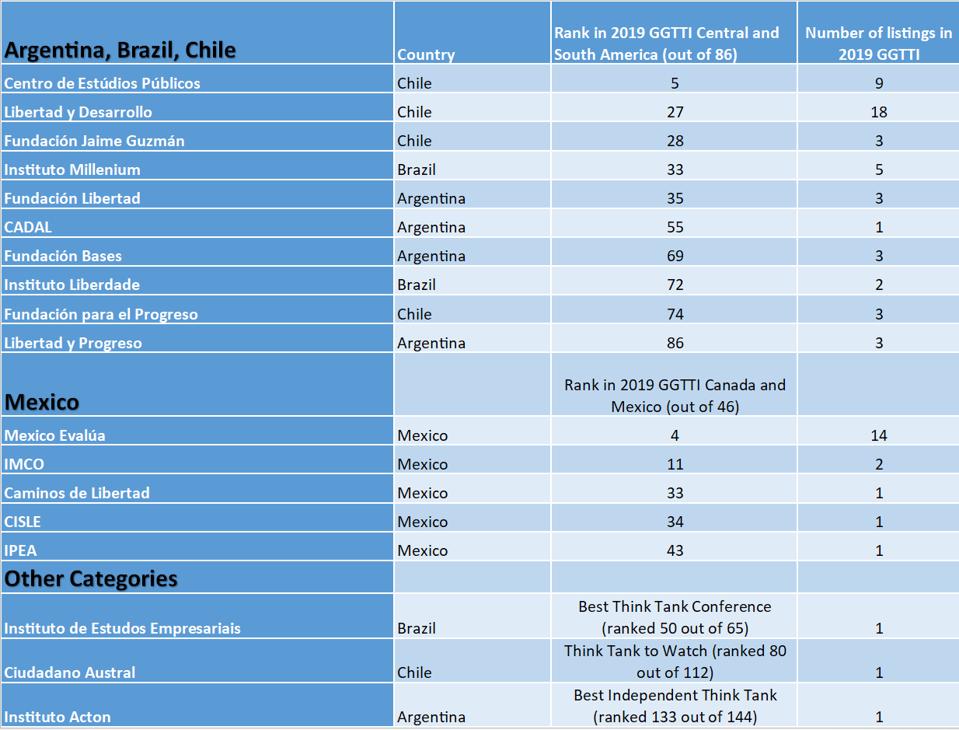 In Argentina, free-market think tanks almost never receive support from the wealthiest business leaders and corporations. This is often true in the United States as well – most free-market think tank funding comes from smaller or mid-level donors – but Argentine think tanks often are lacking as well in this popular level of donor support. Fundación Libertad (FL), a think tank headquartered away from the capital in the province of Santa Fe, is an exception – it has built up one of the best and most diversified donor bases in Latin America, with close to 400 mid-level donors. FL has always guarded its independence, and most of its growth was achieved before the presidency of Francisco Macri (2015-2019). Since President Macri was friendly to the think tank and participated in several of its events, some “friendly” critics argued that FL was benefiting from the relationship. It seemed the opposite to me. FL brought unbiased local and international research to the attention of the Macri administration, which either did not listen or did not have enough courage to implement necessary market reforms.

Fundación Libertad y Progreso (FLP), based in Buenos Aires, was also listed in the 2019 Go To Think Tank Index and was the only free-market think tank in Argentina to have one of its studies listed in the ranking. The study, “Necessary Reforms to Grow in Liberty,” is a blueprint for reforms in many sectors. Unfortunately, since the country has again fallen into left-wing populist hands, the only proposals that have a chance to be implemented are those that can be done at a state-provincial level, where the opposition scored some political victories. FLP director Agustín Etchebarne has now embarked on an effort to start a center-right party respectful of economic freedom. It is not the first effort of its kind in Argentina. The most successful such effort in the last half-century was the UCEDE (an acronym for Union of the Democratic Center), which in 1989 achieved almost 7% of the national vote through a centrist alliance. Its leader, Alvaro Alsogaray (1913-2005), championed social market economics and founded a think tank to promote those views. Alsogaray was a member of the Mont Pelerin Society and with others in his party joined the Carlos Menem administration (1989-1999). Then the party effort fizzled. Later, in 2002, Chicago-trained economist Ricardo López Murphy garnered 16.8% of the vote in the first round of the presidential election with his RECREAR (Recreate for Growth) party. He decided not to form an alliance with Carlos Menem, who received 24% of the vote, and this left the field open for the return of the worst kind of Peronism at the hands of Néstor and Cristina Kirchner (2003-2015). López Murphy has also been associated with a reputable think tank, Fundación de Investigaciones Económicas Latinoamericanas (FIEL), and with RELIAL, a network of liberal think-tanks headquartered in Mexico and supported by the Friedrich Naumann Foundation of Germany.

By most objective standards, Chile’s free-market think tanks are the best in Latin America. This fact might be of little solace for the Chileans who are witnessing major tenets of the free-market model challenged by enemies and allies alike. The Centro de Estudios Públicos, founded in 1980, and Libertad y Desarrollo (LyD), founded in 1990, were listed among the best think tanks in the world in many categories in the Think Tank Index. LyD received 18 mentions in total. The up-and-coming Fundación para el Progreso (FPP), founded in 2012 and ranked 74th in the index, recently made a change at the helm. FPP is funded by leading businessmen, especially Nicolás Ibáñez Scott, and was led until recently by Axel Kaiser. Kaiser has left Chile for a temporary fellowship at the prestigious Hoover Institution, and has become executive director of FPP international work, an effort in the making.

I expect other think tanks in Chile to adjust their work to the new political reality, which is much more hostile to free markets. Of Chilean think tanks that do not appear in the think tank index but deserve attention, Instituto ResPublica is at the top of my list. They have an outstanding board and programs attractive to youth leaders in diverse disciplines. Chile also has many outstanding economists and scholars at several top-ranked universities, who will hopefully come to the country’s rescue. I am more familiar with those at the Catholic University and the Universidad de Los Andes, but there are scholars favorable to the free economy at the Universidad del Desarrollo, Universidad Adolfo Ibáñez, and the Universidad San Sebastián.

During these past two years I have increased my focus on and travel to the four countries covered in this piece: Brazil, Mexico, Argentina and Chile. As usual, I focus on think tanks and intellectual entrepreneurs and their efforts to liberate their economies. My conclusion for the next years is many think tanks in these countries will not be able to resist the temptation to get more involved in politics. Universities that receive little or no government funding, especially in Chile and Brazil, will be occupying more of the space which usually belongs to think tanks. For think tanks, Argentina and Mexico will present the most difficult political scenarios, and few university-based centers or scholars will fill the void.

Here’s How Much Money Flight Attendants Make In...