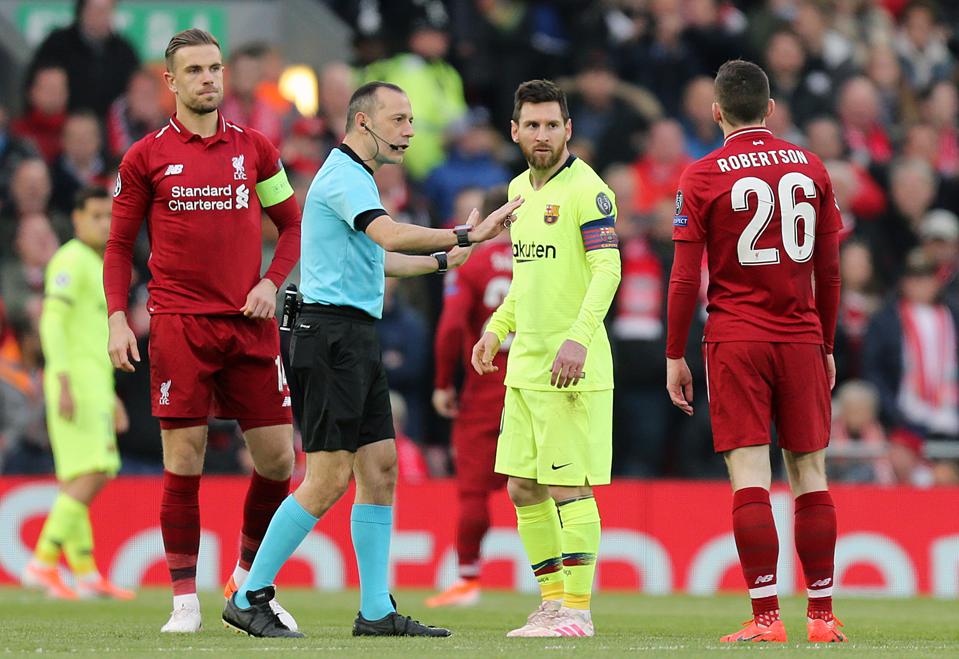 Barcelona’s Lionel Messi remonstrates with Referee Cuneyt Cakir after a challenge from Liverpool’s … [+] Andrew Robertson during the UEFA Champions League Semi Final second leg match between Liverpool and Barcelona at Anfield on May 7, 2019 in Liverpool, England. (Photo by Rich Linley – CameraSport via Getty Images)

The prestigious publication is regarded as the English-language bible of the world’s game.

Player of the year

Messi won the award edging out Liverpool’s Virgil van Dijk once again. These two have also finished 1-2 in the UEFA, FIFA FIFPro, and the Ballon d’Or Awards with Messi winning the latter three.

Barcelona and Real Madrid have provided the winner every year since 2009. The award was instituted in 1982 and the great Paolo Rossi was the first winner.

Messi received just 11 votes more than Virgil van Dijk (613 to 602) while Liverpool had five other players who finished in the top 20. Raheem Sterling was leading English-born player and he was tied for tenth spot.

The World Soccer Awards are not gender specific and the leading female vote-getter was Megan Rapinoe who finished twenty-first.

Manager of the Year

Jürgen Klopp won the Manger of the Year in a stroll. He polled 67 votes to Pep Guardiola’s 2 votes. The margin is quite phenomenal when you consider Manchester City, under Guardiola, became the first English team to complete the domestic treble of League, FA Cup and League (Carabao Cup).

Klopp is the fourth German-born winner and deservedly joins some real heavyweights. Franz Beckenbauer (1990) and Joachim Low (2014) were recognized for winning the World Cup and Ottmar Hitzfeld was honored for Borussia Dortmund winning the 1997 UEFA Champions League.

Enzo Bearzot was the inaugural winner in 1982 and Didier Deschamps won the award in 2018.

Team of the Year

Liverpool finished miles ahead in the voting. The Champions League winners received 60 votes while the next closest received 3. Finishing right behind Liverpool were Manchester City, Ajax, and the United States World Cup-winning women’s national team, all with three votes.

Liverpool also lifted the UEFA Super Cup and FIFA Club World Cup in 2019 and are charging to towards their first ever Premier League title and first top-flight title in three decades.

Liverpool last won the World Soccer award in 2005, and that was also the last time Liverpool won the UEFA Champions League. Liverpool’s other win was in 2001 when the club won the two English domestic Cups and the UEFA Cup.

Brazil won the first award in 1982 while France won twelve months ago.

You can find out at worldsoccer.com how each judge voted.

Offseason Moves Give White Sox A Boost Of Contention Fever

6 Things You Need To Consider When Appraising...

Money Isn’t Everything—When You Have It

Gift This, Not That: Nomad Lightning Cable Vs....

COVID-19 Is Officially Now A Panic-Demic, Not A...

English Indie Pop Band Blossoms Are Back At...