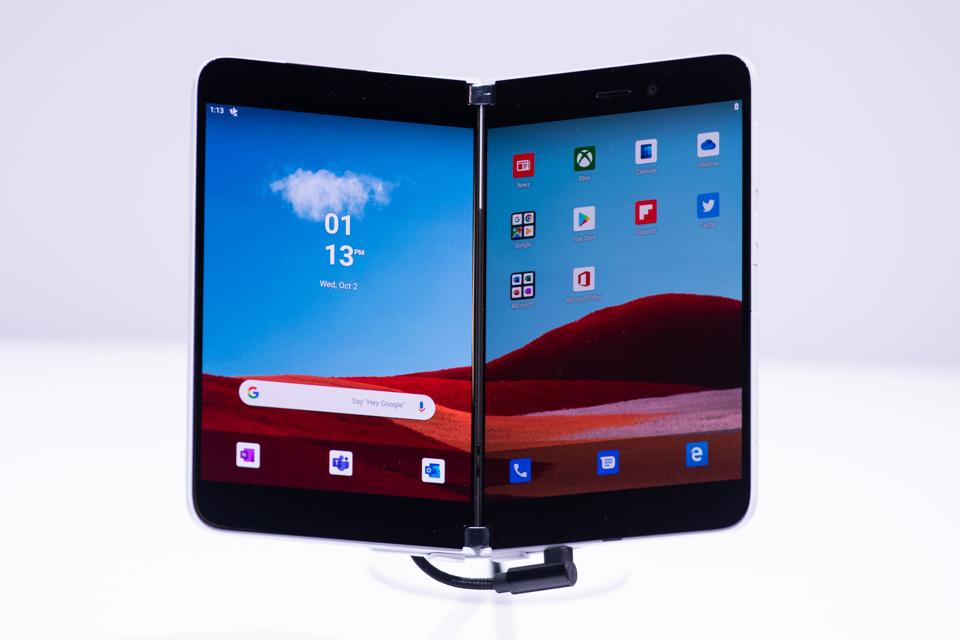 Whilst the immediate focus is on Samsung’s Galaxy Flip, there’s a bigger and more expensive Samsung foldable on the horizon – the Galaxy Fold 2, which looks like it’ll face serious competition from Microsoft’s similarly shaped Surface Duo.

Despite not being a truly foldable phone the book-shaped, productivity focused, Surface Duo will occupy the same space – and the court the same consumers – as Samsung’s Fold 2.

Microsoft, however, is fighting an up-hill battle. The Duo is the first in a brand new range, it’s the company’s second attempt at cracking the smartphone market after failing so publicly and spectacularly last time around – and it has to reorganise Android – and convince developers to get on-board – to make its dual-screen concept work.

For a first go, it’s a big ask. So what can the Windows-maker do to make the Duo a success and see-off competition from Samsung?

A big question about the Surface Duo is how apps will make use of both screens. Android tablet apps are a mixed bag (I’m being generous here) thanks to the many different shapes and sizes Android tablets come in.

Microsoft is trying to solve this by asking developers to think about how apps make use of the second screen and how they appear on one or both displays – it’s doing this by giving early access to developer kits. What it doesn’t want is poorly sized apps that don’t snap to the seam, or worse, span across both displays and lose vital information in the hinge.

But if it all comes together harmoniously, as we’ve seen in this two minute video of a Duo emulator, the end product could be very exciting. What we can see here is how the second screen adds to the experience rather than being an awkward add-on (like LG’s G8x).

Apps using the second screen to display additional information or options – like Google Maps displaying a live map on one screen and a list of places on the other – is a very different experience to the single large screen setup on the Fold – or any other tablet.

Microsoft is ambitiously trying to create an entirely new Android experience on a new type of device, and the possibilities are tantalising – especially for work and creative tasks. Running two apps that compliment each other is prime productivity functionality and it’s helped by the seam which provides a clear border between the two activities. In the same way two desktop monitors is better than split screening on one monitor – split screen on the Fold just isn’t the same, or as good.

Can Microsoft undercut the undercutters?

The Fold will be the third foldable device from Samsung within 12 months. The company has hinted that more flexible handsets are on the way and other devices from Motorola and TCL will land soon, too. The foldable market is heating up and prices are already starting to come down.

Microsoft isn’t known for its competitively priced hardware, quite the opposite in fact. But I’m hoping its second attempt at mobile making acknowledges the creeping price war.

Considering the Windows-maker isn’t burdened by the high-cost of manufacturing flexible displays, this might be achievable. But it is a Surface-branded phone that will come with premium specifications – and it still has two displays – so it will likely be expensive, but I doubt it’ll cost as much Huawei’s Mate X or Samsung’s Fold ($2000).

On the flip side it’s also facing off against a company in Samsung that is adept at undercutting the competition. Samsung’s 2015 “test drive” promotion, which let iPhone owners temporarily swap for a Galaxy for $1, ruffled Apple’s feathers at the time. The Korean company also looks like it’ll bundle a pair of expensive, next generation, wireless headphones with the Galaxy S20.

I don’t know if Microsoft will want to give away a pair of its anticipated Surface Earbuds for free with the Duo, but it would certainly be a statement of intent.