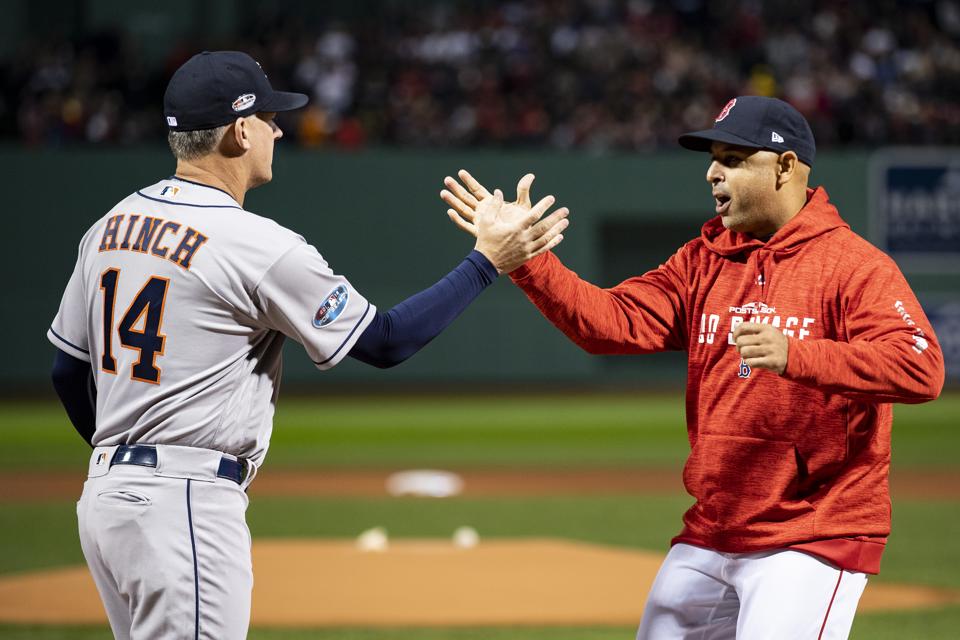 AJ Hinch and Alex Cora were coveted managers, but after their sign-stealing scandal, they may never … [+] manage in MLB again. (Photo by Billie Weiss/Boston Red Sox/Getty Images)

There are no excuses now. The line has been established, and the consequences made clear.

If your team is caught stealing signs with the use of electronic technology, you as the manager will lose your job as immediately as possible, and quite possibly your career in Major League Baseball.

That is the absolute truth as we now know it after the Houston Astros and Boston Red Sox have reacted to MLB’s sign-stealing investigation by firing their World Series winning managers over the last two days – the Astros letting go A.J. Hinch on Monday and the Red Sox parting with Alex Cora on Tuesday. Make no mistake, despite apologetic and diplomatic press releases and statements, the teams fired these managers. Nothing was mutual. Yes, Cora agreed, but the Red Sox made the first move.

It was swift, severe punishment. And it is now the expected minimum cost for this kind of cheating.

Hinch’s axe came as a result of his involvement and yearlong suspension handed down by MLB, the Astros knowing they could not keep him in the dugout and still preach they are a clean team in 2020. Cora’s came as a preemptive strike from the Red Sox, who must now understand that Cora’s punishment would be more severe than Hinch’s considering his role in both teams’ cheating.

It’s been a head-spinning couple of days in the baseball world. But now there is some sort of clarity. Clarity on who cheated, and how. And clarity on what future cheats will face if they are busted.

This saga could keep leaving former Astros in its wake. Carlos Beltran was a player on that 2017 championship team and one of the ringleaders in the sign stealing, according to MLB. Now he is prepping to enter his first spring training as manager of the New York Mets. As of now, there has been no word on how the Mets might handle Beltran’s future.

Part of the reason Hinch and Cora no longer have jobs is because of the anticipated distraction they would have on the upcoming seasons. In New York, this scandal is bound to be a massive weight on the Mets with Beltran in charge of the clubhouse.

We’ll have to wait and see how his situation plays out, but he should be nervous considering that he lied about his knowing about the scheme and the fates of Hinch and Cora.

Baseball likes contrition. It likes its sincere-sounding apologies. It likes when people wear their mistakes and promise to have learned something in the process.

Hinch and Cora have done that based on their statements, although the sincerity of those and their actual accountability can be debated. Both men knew the cheating was happening when it was happening – in Cora’s case, he orchestrated it in Houston and most likely in Boston – yet they did nothing to stop it. And the smart money is on them never having said a word going forward had their teams not been caught.

Still, Hinch is likeable and could very well find himself back in uniform in 2021 or 2022. As for Cora, he’s assumed to be a two-time offender now, even with the investigation into the Red Sox not completed yet. That might be enough to keep him banished for life, with no team wanting to deal with the circus that his hiring would inevitably bring them.

What we know for sure is that MLB, with the help of the Astros and Red Sox brass, have made things simple for managers now and in the future: If you are caught, you will lose your job, reputation and possibly the rest of your MLB career.

It’s a massive price to pay for your hitters knowing if they’re about to see a slider or changeup.

The Best — And Most Important — Video...

Why The Boston Red Sox Should Trade Mookie...

After Interviewing A Trumpian Autoworker, I Sought Guidance...