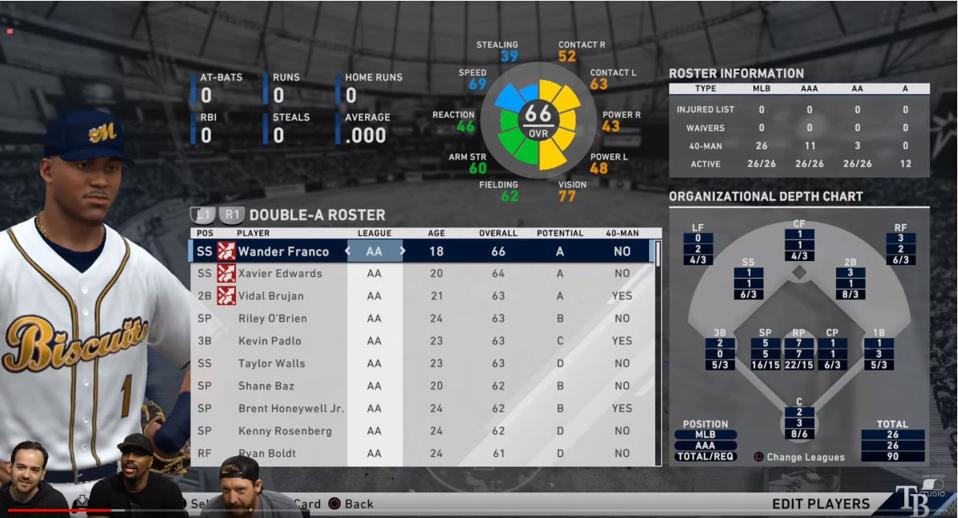 Sports gamers are accustomed to remaining skeptical whenever a new feature is introduced to their favorite series. New wrinkles are rarely as good as they appear when first advertised.

A savvy sports gamer knows they will have to spend a few hours with a title to find out the limitations to the next-greatest thing that is being sold to the fanbase. I must admit, while I was excited about the initial unveiling of the full minors rosters, and the team rebranding in MLB The Show 20, I was still a little cautious.

I thought there might be some sanction that hampered the sandbox qualities both of those features offer. Thankfully, after watching the stream on Thursday that broke down the new franchise mode features, it looks as good as advertised.

Full Minors is In, And Not Just In Name Only 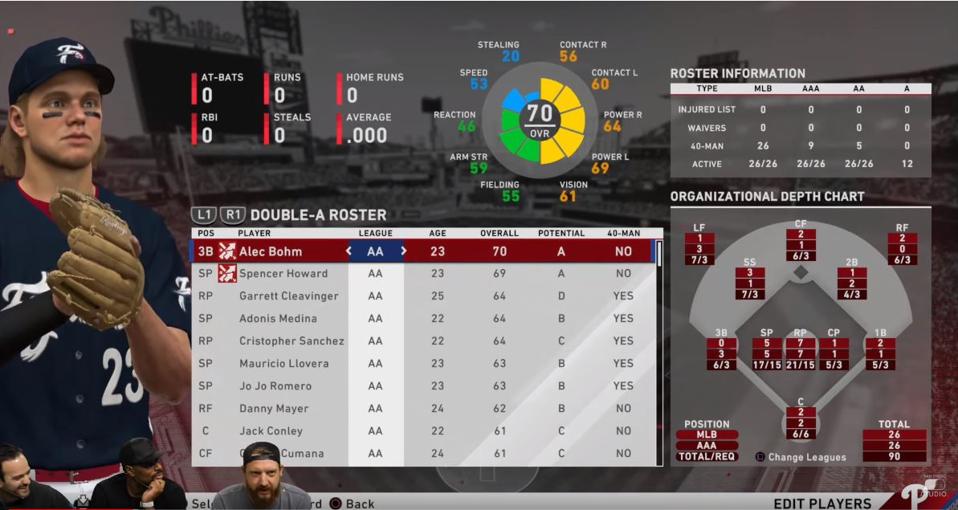 Per the stream, the full minors concept is real and fully fleshed out.

The stream showed scans for several top prospects like Luis Robert, Alec Bohm, Wander Franco, and others. These prospects aren’t just accurately depicted with scans and body types, their swings, pitching motions and equipment have also been duplicated. 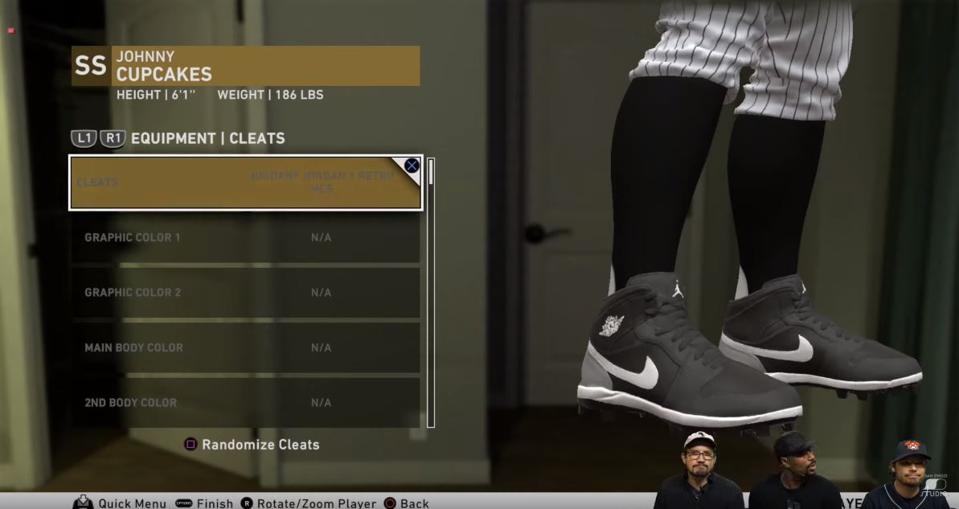 Quite honestly, I was pleasantly surprised to see how deep Sony is taking this feature in its first year. In all, there will be more than 1,500 minor-league prospects, and those players will be playable in exhibition, franchise, Road to the Show, March to October and Diamond Dynasty.

The minor-leaguers will have also have audio support from the in-game commentators, which should do a ton for immersion.

It’s also fantastic to see Sony working with Ridin aka Scott Spindler, the gentleman who spearheaded the creation of this same concept for years before the publisher had the license to include it in the game.

Spindler and his team’s work helped to show Sony how important the license was to have, and after years of doing it for the love of the game, there is some official compensation and validation for the hardcore roster guy.

If that was all that was new on this front with the new game, the upcoming year would still be a strong one for the MLB The Show franchise mode. However, there is more.

Team Rebranding is Bigger Than I Expected 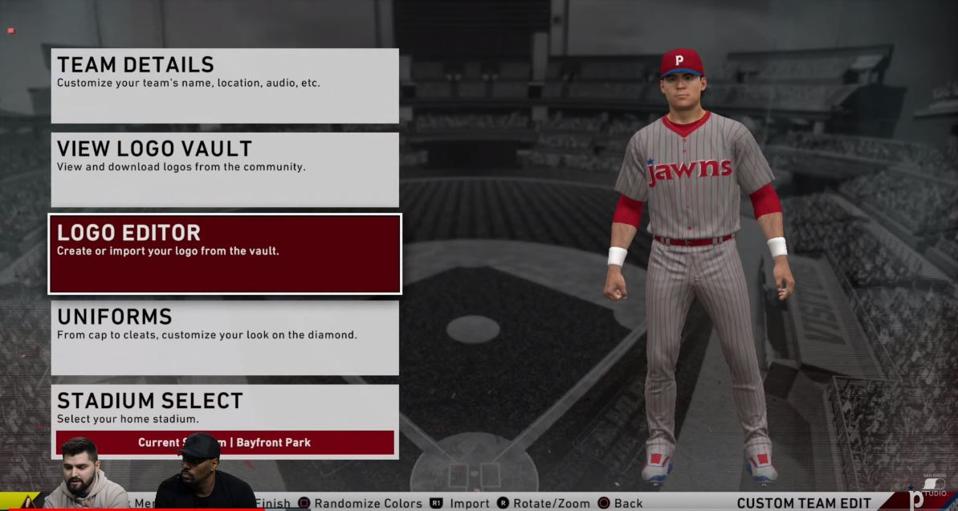 I was fully prepared to find out that we’d only be able to customize one team in a franchise mode which would have killed my excitement for the feature. Thankfully, that’s not the case.

According to the stream, you will have the option of rebranding and recreating the entire major leagues. Like the minor leaguers, there is full audio support, and depending on where you move your franchise, you will trigger specific lines that reference geographically relevant commentary.

While this wasn’t mentioned in the stream, I’d assume there will be something along the lines of “baseball is back in Montreal,” if you move or create a team in the city where the Expos once played.

That sounds like a small thing, but it’s huge when it comes to driving this concept home. The ability to customize a team can take place before you begin a franchise or during an offseason, and you’ll be allowed to move existing teams out for your custom creations.

There are three features that are still missing from the MLB The Show franchise mode options.

There is still no expansion capability. When you create a new team, they have to replace an existing one. Expansion is one of the options fans have been asking for, but they will not be getting it this year. Realignment isn’t in, but I’m not counting it here because there are some workarounds that can be done with the team editor.

It would likely be time consuming and more cumbersome than what NBA 2K offers in its MyLeague mode, but the capabilities that appear to be there are an improvement from previous versions in the series.

As of now, franchise mode will remain an offline-only option. The feature used to be in the game, but it was problematic. Sony hasn’t yet brought it back, and it’s not surprising the developer would resist revitalizing it in the final exclusive year on the current generation of consoles.

The third missing feature is create-a-ballpark.

With the team creation options now in the game, the desire to create a custom park is only going to get bigger. Like the online franchise, this feature is likely such a huge undertaking, it isn’t something that would be added heading into the age of the PlayStation 5 and Xbox One Series X.

However, I’d say create-a-ballpark now seems like an even more natural progression for the series. It is the next step for the creation suite.

Even with these three things being absent from the series, I must admit The Show 20 is looking strong with a little over a month left before its release.

MLB The Show 20 releases exclusively on the PlayStation 4 on March 17.

Those Slain Florida Dolphins Were Inadvertently Undermined By...