Home Technology Moon Hides Mars Then Itself As A ‘False Dusk’ Glows: What You Can See In The Night Sky This Week
Technology

Moon Hides Mars Then Itself As A ‘False Dusk’ Glows: What You Can See In The Night Sky This Week 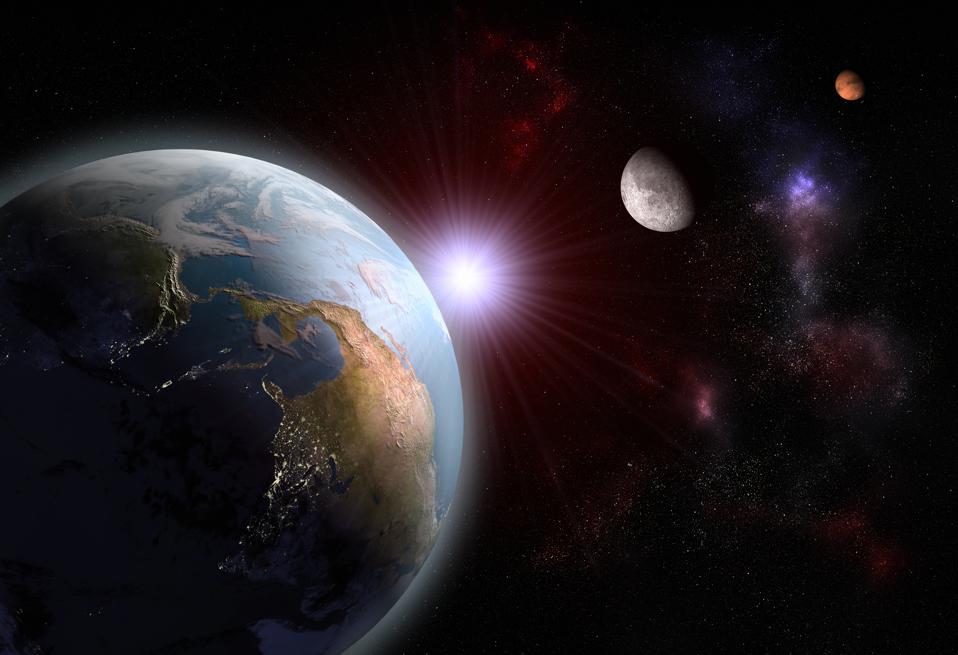 3D render of the alignment of The Earth, The Moon and Mars

Get stargazing! This week ends with a New Moon, making the entire week the bulk of February’s 10- nights-long “stargazing window” since the skies will be dark and free from moonlight. So it’s a great week to get outside—if there’s a clear evening—and find a winter constellation or two while they’re still visible (see below for my “constellation of the week”). Oh, and you can even see “the biggest thing in the solar system”—zodiacal light—if you get yourself to a very, very dark place after sunset.

However, this week is dominated by something highly unusual as a planet briefly vanishes from view.

If you’re a fan of watching live rocket launches, known that SpaceX plans to launch its (delayed) fifth batch of Starlink satellites at 10:04 a.m. EST on a Falcon 9 rocket from Cape Canaveral Air Force Station, Florida. You can watch it live on the SpaceX YouTube channel.

Binoculars at the ready! Those in parts of the US, Canada and Mexico will get to see the odd sight of Mars disappearing behind the moon. Taking place in the eastern pre-dawn sky, those in central and western regions of the US will be best positioned to witness this rare “occultation,” with the red planet Mars remaining obscured for up to an hour and a half, reappearing from behind the darkened limb of the crescent moon. Here’s more information on observing the event from Sky&Telescope.

The rest of the world will see Mars very close to the moon.

This is what observers will see just before Mars vanishes from view on Tuesday morning—a fabulous … [+] sight in a telescope!

Get up an hour before sunrise and you’ll see a 16% crescent moon between Mars and, closer to the horizon, Jupiter. You might also see Saturn, which is now rising just before dawn. Look to the southeast.

Another early start will bring a sight of a 9%-lit crescent moon very close to Saturn (and a fine sight in binoculars), with Jupiter just above in the southeastern pre-dawn sky.

When the moon’s orbit takes it roughly between the Earth and the sun, it’s invisible to us since its illuminated side is facing away from us (no, there is never, ever a “dark side of the moon”!). During this phase our satellite is invisible … and the stars come out. The week before New Moon is the very darkest of the month, so the best for stargazing. This month’s new moon occurs at 15:33 Universal Time. 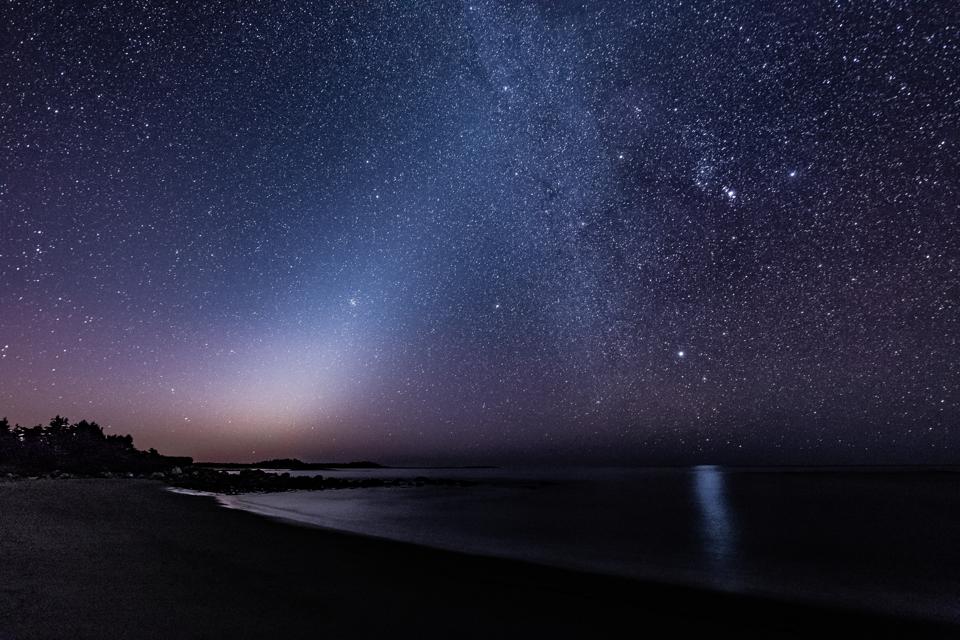 Object of the week: zodiacal light

Did you know you can see the solar system glow? If you’re into night-scape photography—long-exposure photos that capture the light of the stars—get yourself to a Dark Sky Park or similarly dark haven to try for zodiacal light after sunset. Known as a ‘false dusk’ in spring, this pyramid-like glow is sunlight reflecting off dust and ice particles in the solar system, which orbits the sun in the same plane as all of the planets. The zodiacal light should look especially bright this week. 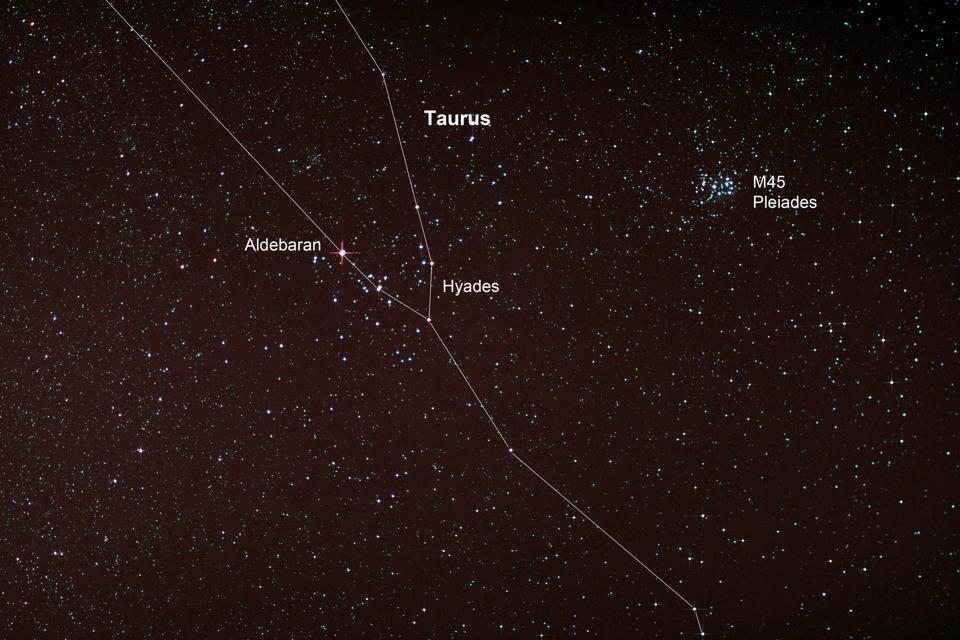 Constellation of the week: Taurus (and the Pleiades)

Due southeast after sunset, Taurus “the bull” is easy to find. Locate Orion’s Belt, then follow those three stars pointing upwards and you’ll get to Aldebaran. It’s the brightest star in Taurus and the 13th brightest in the night sky. Around Aldebaran is the Hyades, a loose-looking cluster of stars 151 light years away (it looks relatively loose because it’s one of the closest clusters to us). An orange giant star 65 light years distant, Aldebaran means “follower” of my favourite night sky object of them all—the Pleiades. A star cluster with sparkling young blue stars, the Pleiades—or “Seven Sisters”—is 444 light years distant. 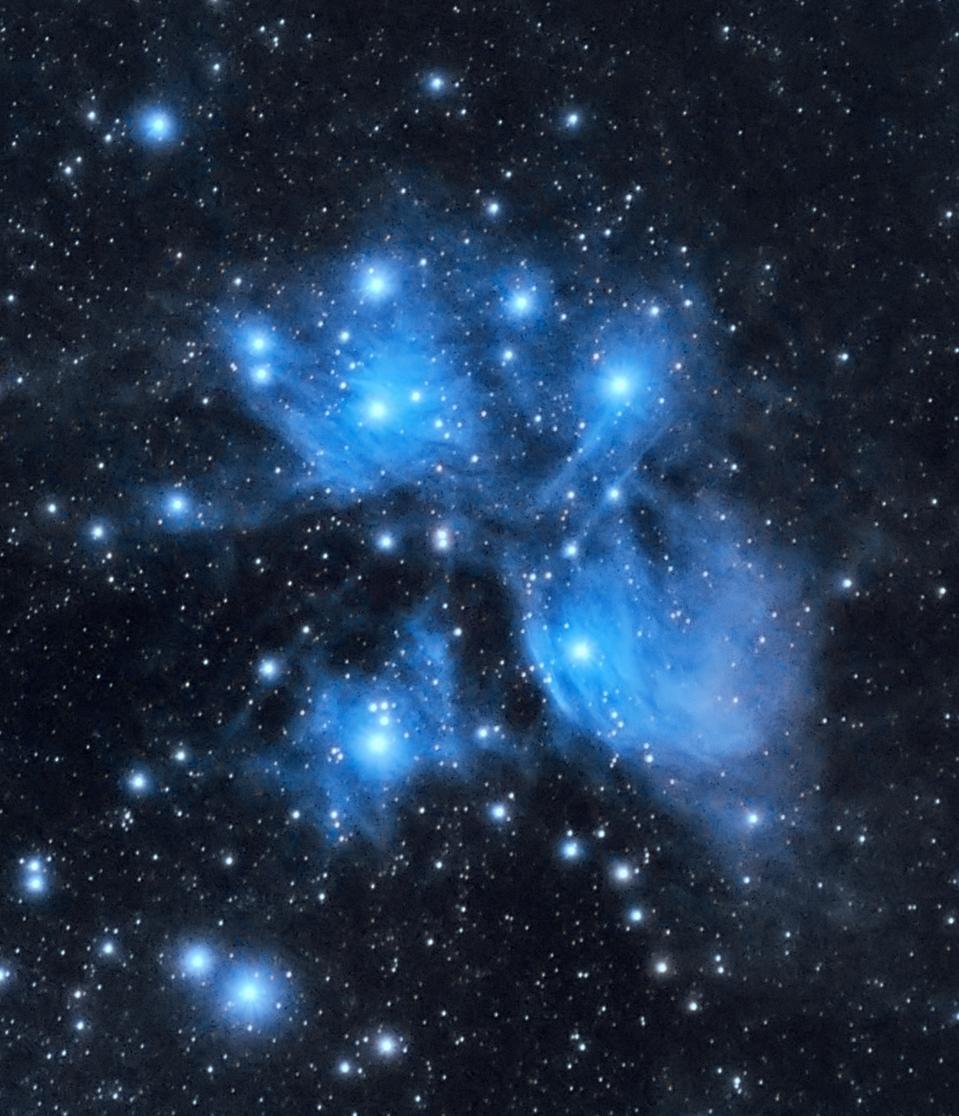 The Pleiades is easily found by going just beyond Aldebaran and the Hyades from Orion’s Belt in a straight line. The Pleiades actually look much better to the naked eye or binoculars than through a telescope; the best way to appreciate its brightness is to use “averted vision” to look just to the side of it (the human eye’s peripheral vision is the most sensitive to brightness). Now focus on the stars of the Pleiades to see their blue color. Can you see six or even stars?