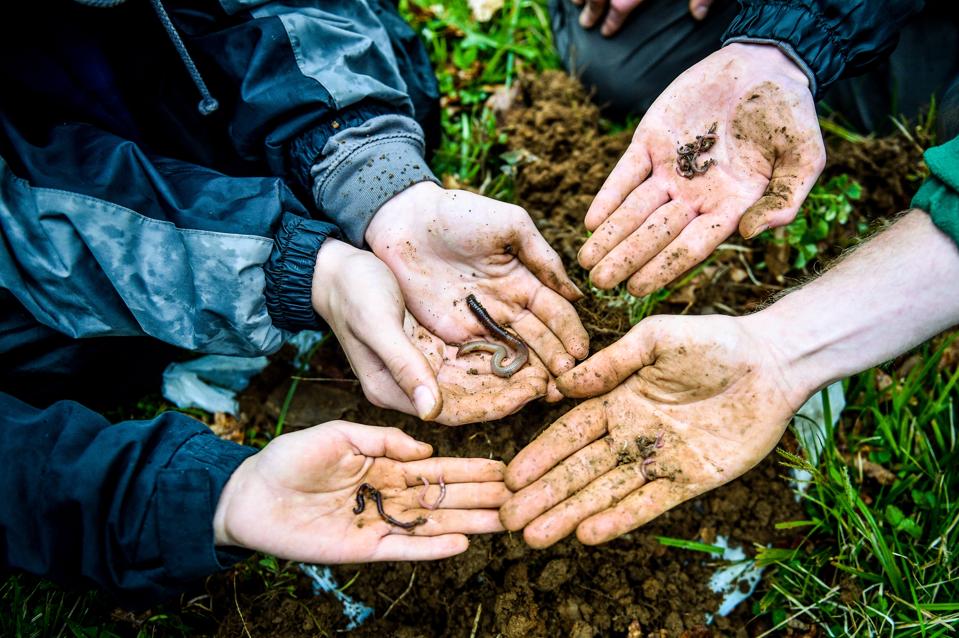 Earthworms wriggle across the hands of Forestry Commission volunteers at a dig for worms at … [+] Westonbirt, The National Arboretum, in Gloucestershire, during a survey to mark the launch of a nationwide programme taking place during the Forestry Commission centenary year to find out more about forest wildlife. The public are being encouraged to record forest wildlife through the seasons using a mobile phone app. (Photo by Ben Birchall/PA Images via Getty Images)

A neighbor came to my house the other day bearing an unusual gift. In her arms, she carried a bucket half full of a brown liquid containing a bit of chicken poop and worm castings, which is a fancy name for worm poop. I was delighted. While most people were out buying stuff at the mall, the two of us spent the next few hours conditioning the soil around my fruit trees. We scooped out the bottom of my compost, added the worm poo tea to it and then dug it into the ground, all while chatting about women’s empowerment and healthy living.

Over the past year, I’ve taken more and more steps toward sustainable living and reaped many of the benefits: a lower carbon footprint, lower environmental impact, lower coast of living. I’ve reduced plastic, cut out plastic cutlery, repaired items at a Fixit Clinic instead of buying new. But I’ve also received an extra benefit that I never expected: a sense of belonging in my community.

I learned that about 40 percent of the food we buy ends up in the trash. We buy more than we need or get served more than we’ll eat at restaurants. Then without much thinking, that food is dumped straight in the garbage. Food, in fact, is the number one product that gets tossed into America’s landfills.

Food waste is heavy; think month old pumpkin. Hauling this type of trash food hundreds of miles to a landfill via garbage trucks that run on diesel and get terrible mileage contributes tons of carbon pollution to our atmosphere. On top of that, it’s expensive.

Once it arrives at the landfill, the wasted food is packed tightly with everything else in the landfill. This compression insures there will be little to no oxygen in the system during the decomposition process. Without oxygen, organic materials in a landfill turn predominantly to methane, a potent greenhouse gas 28 to 36 times more effective than CO2 at trapping heat in the atmosphere.

But it doesn’t have to be this way. Composting is one of the cheapest, easiest ways to reduce waste while improving soil at the same time. The decomposition process in composting is different than in a landfill. Worms and other decomposers aerate the compost so the food is looser and not compacted, which means it undergoes aerobic decomposition and produces much less methane.

Worm composting, also known as vermiculture, is becoming more popular because the worms break down the food waste quickly and also because it takes so little space that even people who live in apartments can do it. In my neighborhood, friends get together as compost buddies, sharing waste food scraps, traditional compost, camaraderie, and of course, worm poop.

During our current climate crisis, everyone I know has started gearing up to confront an increasing number of climate emergencies. But even as we struggle to deal with extreme weather and fight for environmental action, we need to remember that within the struggles and the fights lies a wonderful opportunity. The opportunity to shift our value systems away from short-term material gratification and toward community. Because the sense of belonging that comes from community engagement is the genuine gift that all of us long to receive.