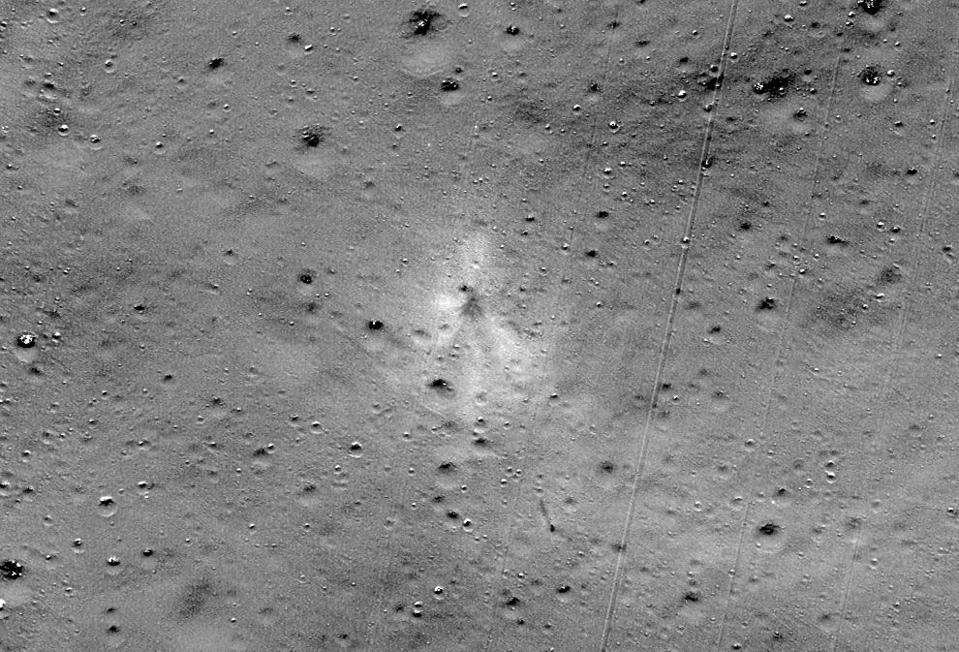 The impact site of the lander can be seen in the center here.

NASA says it has located the final resting place of India’s Vikram Lander, which crashed on the surface of the Moon in September 2019 after a failed landing attempt.

In images taken by its Lunar Reconnaissance Orbiter (LRO), NASA said it found the impact point of the lander along with a debris field nearby, likely resulting from the lander after it hit the surface. The images were taken across September, October, and November, with analysis by a person called Shanmuga Subramanian revealing the location of the lander.

“Shanmuga Subramanian contacted the LRO project with a positive identification of debris,” NASA said in a short statement. “After receiving this tip, the LROC team confirmed the identification by comparing before and after images.”

A clear change in appearance on the surface caused by the failed landing of the Vikram Lander on September 6 can be seen in the images. They show a crater resulting from the impact of the lander, coupled with a nearby field of debris spreading more than a kilometer to the north and south of the crash site.

Areas of disturbed soil can also be seen in the images, “likely where small bits of the spacecraft churned up the regolith [lunar soil]” said NASA. The best images of the crash site and the nearby debris were taken by the LRO on November 11.

“Despite the loss, getting that close to the surface was an amazing achievement,” NASA added. India, which would have become just the fourth nation after the Soviet Union, US, and China to land on the Moon, previously said it had located the lander, althouogh images of the crash site had not been released. 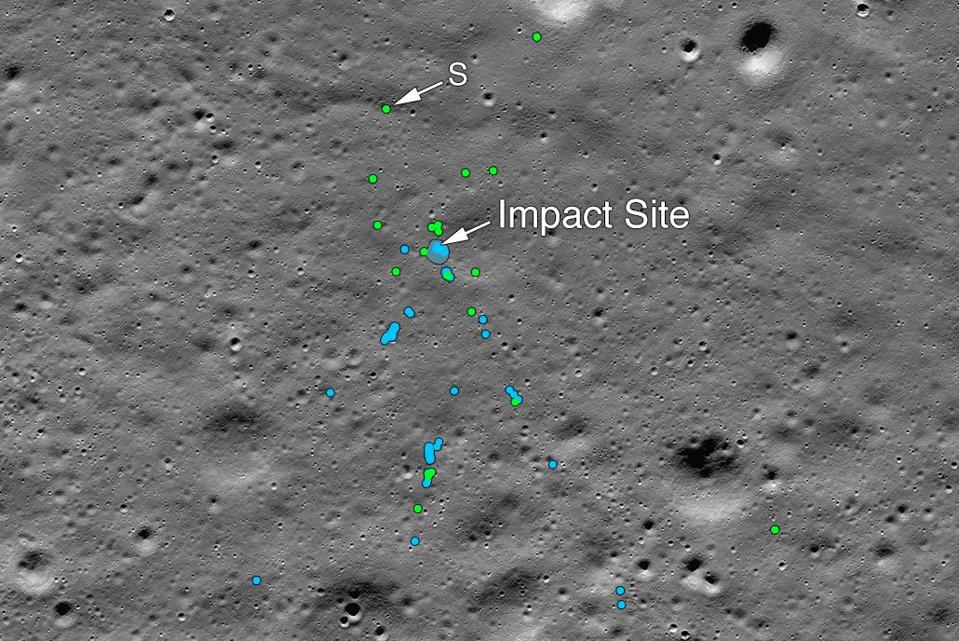 Debris (green) and soil disturbances (blue) from the debris were found in the images.

India’s Vikram Lander, part of the overall Chandrayaan-2 mission that included an orbiter that is still operational, was launched to the Moon on July 22, 2019. After a journey of about six weeks, the lander separated from the orbiter and began its descent to the surface.

However, with a global audience enthralled by the efforts of the Indian Space Research Organisation (ISRO), the lander sadly dropped out of contact just a few hundred meters above the surface of the Moon. A failure of the spacecraft’s descent system was blamed, which resulted in a “hard landing”.

Subsequent efforts were made to contact the lander, which also carried a rover called Pragyan, but sadly they were in vain. At the end of November, the ISRO confirmed that the lander had crashed on the Moon near its intended landing site at the Moon’s south polar region, an attempt to become the first spacecraft to land in this location.

“During the second phase of descent, the reduction in velocity was more than the designed value,” the ISRO said in a report of the landing. “As a result, Vikram hard landed within 500 [meters] of the designated landing site.”

But the ISRO noted that many aspects of the mission, including the launch, entering lunar orbit, and lander separation were “successfully accomplished”, while all eight of the scientific instruments on board the orbiter were “performing as per the design and providing valuable scientific data”. It’s hoped the orbiter will remain operational for seven years.

The failed landing, however, was a sombre moment for the country, with ISRO chief Dr Kailasavadivoo Sivan breaking down in tears after coming so close. But India will try again – the country recently announced it may attempt to land on the Moon again as soon as 2020 with a Chandrayaan-3 mission.

For now, though, the story of the Vikram Lander finally comes to an end. It was a mission that inspired so many, and came so close to complete success, but now we can say goodbye, safe in the knowledge of where it will spend the rest of its day on the surface of our celestial neighbor.

Trendwatch 2020: The Renaissance Of Brick-And-Mortar Locations As...