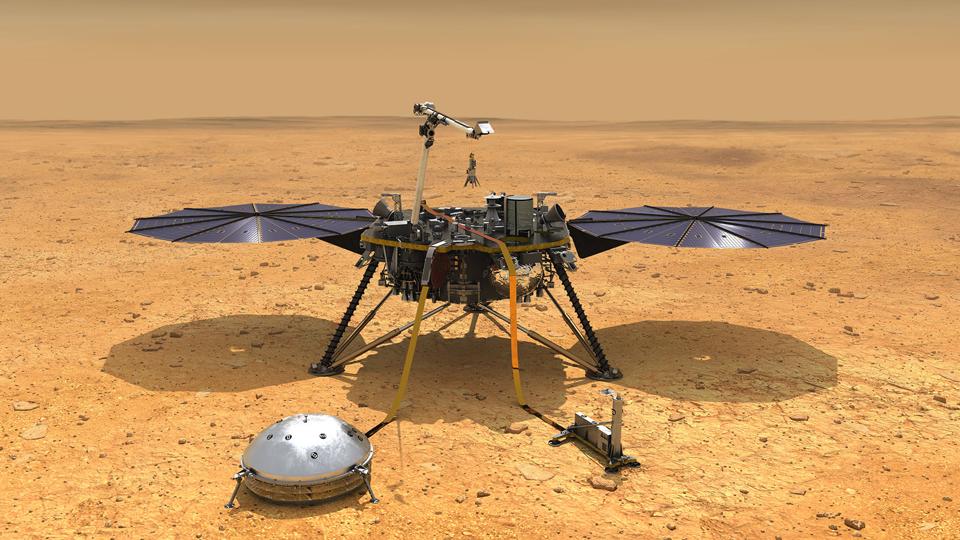 Artist concept of lander on Mars.

NASA’s InSight lander —- which touched down more than a year ago on Mars’ Elysium Planitia —- has detected a magnetic surface field that is ten times larger than expected from previous magnetic measurements from mars orbit.

A magnetometer instrument on InSight (Interior Exploration using Seismic Investigations, Geodesy and Heat Transport) has for the first time allowed researchers to get a tantalizing glimpse into mars’ ancient past at a shallow crater nicknamed ‘Homestead Hollow.’ By picking up both unexpected magnetic pulses as well as hints of much stronger local magnetic fields, is a first step towards a better understanding of the planet’s ancient interior.

“How long a planet had a global magnetic field tells us about the history and composition of the planet — how it has cooled over time, and whether the core is pure iron or iron with elements we find in rocks like sulfur, or oxygen, in it,” Catherine Johnson, lead author of a paper appearing in the journal Nature Geoscience that documents the findings, said in a statement.

“Big open questions for Mars are if, and how, the changes in climate over billions of years and the presence or absence of a global magnetic field are linked,” Johnson, a planetary scientist at the Planetary Science Institute (PSI) in Tucson, Ariz., said in a statement.

These newly measured surface fields are made up of magnetized ancient rocks that can still be found on the surface, though most are now between 200 feet to several miles below ground, notes PSI.

How can the researchers be sure these rocks are remanents of a global magnetic field?

Mars has no global magnetic field today, but we know from satellite data that rocks in many places are magnetized and that they acquired their magnetization about 4 billion years ago,” Johnson told me. Thus, she says, this strong field at the landing site has to be coming from ancient rocks buried beneath the surface.

Superposed on top of this are some smaller roughly one percent magnetic amplitude variations from day to night that are likely due to electric currents in Mars’ uppermost atmosphere, says Johnson.

Billions of years ago, Mars had a magnetic field which NASA says magnetized ancient rocks that are now below ground.  However, most rocks at the surface at InSight’s location are too young to have been magnetized by the planet’s former field, Johnson said in a statement.

Thus, Johnson and colleagues infer in their Nature Geoscience paper that there are magnetized rocks beneath the surface, within some 150 kms of the landing site that are consistent with a past dynamo with Earth-like strength.

“Geological mapping and InSight seismic data suggest that much or all of the magnetization sources are carried in basement rocks, which are at least 3.9 billion years old,” the authors write.

NHL Trade Deadline: Lou Lamoriello Rewards The Islanders By Ramping Up For A Playoff Push

What If The FinTech Market Slowed Down in...