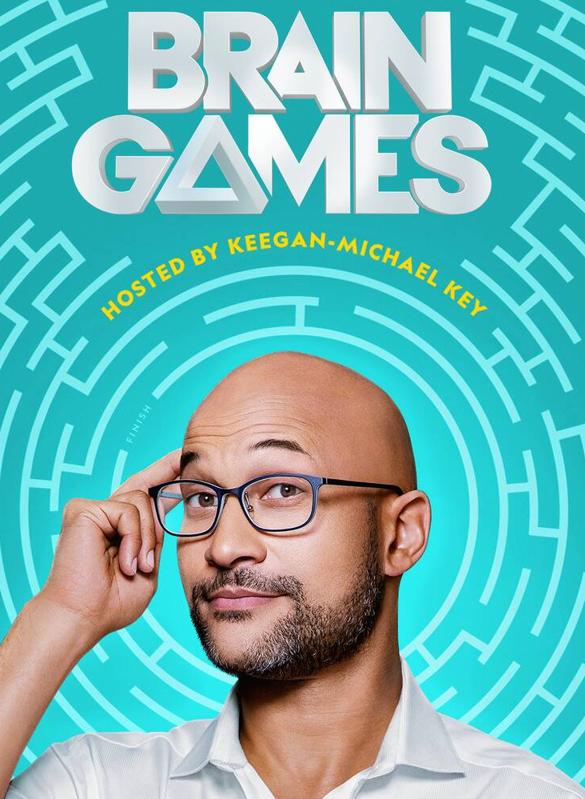 Keegan-Michael Key is host of the new season of Brain Games on Nat Geo.

The brain is a mysterious thing. I am always fascinated by things like the viral blue or gold dress debate and how two people can look at the same picture and see completely different things, and I love trying to break down optical illusions or solve puzzles. Admittedly, however, I don’t know much of the science or details behind why or how the brain works the way it does—which is one of the reasons I appreciate Brain Games.

Nat Geo rebooted the show. This is technically Season 8 of Brain Games, but the show hasn’t aired for a while. The new version is a complete reimagination, with Keegan-Michael Key as host. The new season of Brain Games kicked off this week with a focus on how the male brain differs from the female brain, which pits husband and wife Dax Shepard against Kristen Bell, followed by an episode that explores fact vs. fiction featuring Ted Danson.

I am a huge fan of Keegan-Michael Key—a combination of hometown pride and a stalker-ish “I knew him when” sort of thing. He was born in Southfield, Michigan—which is where I grew up—so I love the Detroit area connection. I also had the opportunity to see him perform at Second City Detroit back around 2000 before his career really took off. Key was by far the best and most memorable part of the show that I saw, though, so I am not the least bit surprised at his success.

I had an opportunity to speak with Cara Santa Maria—the resident brain expert for the show. Cara explained that the shows are filmed in a studio in front of a live audience, and that each show has a celebrity guest or guests and focuses on a different theme. She praised Key as host of the show for his genuine curiosity about the science and the tests they do on the show and his ability to think on his feet and guide the games so that they are both entertaining and educational.

The Science Behind Brain Games

The show would be pretty entertaining and interesting if they just did the tests and experiments and let us marvel at the results. Brain Games doesn’t do that, though—for the most part. I will cover the exception in a little bit.

For example, Shepard beats Bell in an exercise to put 25 cubes in descending numerical order. The show then provides an animated short that explains that in timed math tests women may do worse because they’re afraid that they will do worse. Researchers dubbed this the “stereotype threat,” which is the fear of proving a cliché—in this case that women are not as good as men at math.

The couple also had to do a test that was sort of a giant jigsaw puzzle. They were presented with an oversized refrigerator and a number of pieces of different shapes with the items you might find in a refrigerator, and they had to get all of the pieces packed into the fridge. Shepard crushed Bell again. A pre-recorded scene with the Muppets’ Dr. Bunsen Honeydew then explains that a study has found a connection between this ability and the structure of the parietal lobe—the region of the brain that controls spatial recognition. Men typically have a larger parietal lobe, which would give them an advantage for a test like this.

Cara Santa Maria oversaw a test that put three men against three women in a version of the age-old telephone game. One person had to look at what a model was wearing, describe it to a second person, and that person relayed the details to a third person to try and dress their model the exact same way…in 3 minutes or less. The men failed miserably. The women dominated this test. Cara then explains in an animated scene some of the research behind the difference in how men and women listen and communicate.

On Episode 2 with Ted Danson, the show begins by enlisting the help of the Blue Man Group and participants from the audience for an exercise to guess Michael J. Fox’s middle name. They painted signs—some with clear blue text and some with a crazy mix of psychedelic colors running down the canvas. When asked to guess the correct middle name, people tended to choose the one with the clear blue text. Key explained that this demonstrates the effects of “cognitive ease”—that we are more likely to believe or agree with the one that is easier to read.

Key also covered “color psychology”—the use of specific colors in marketing to trigger a reaction. He described the way colors cause a reaction in the hypothalamus of the brain—affecting mood, heart rate, alertness, and impulsivity.

Now for that exception I mentioned. One thing about the show that is mind blowing—but doesn’t really fit the concept in my opinion—is Lior Suchard, the shows mentalist. Suchard performs amazing feats that seem impossible, but there is never any attempt to explain how he does that or how it works. You’re just left wondering how Suchard is able to do what he does, and consider whether or not he does, in fact, possess supernatural abilities. I mean, I understand that magicians don’t give away their secrets, and it would ruin it for mentalists in general if they revealed how it works—I’m just saying that without some attempt at explaining it, it doesn’t really fit on the show.

There is much more on both episodes. I don’t want to spoil the whole thing. I love the show, though. Keegan-Michael Key is a great host and Cara Santa Maria helps shed some light on the how and why. I enjoy watching the celebrity guests and audience struggle through the challenges, but what I really appreciate is getting the explanation after the fact and gaining some understanding about why it works that way. Perhaps knowing more about how the brain works and why we respond the way we do can help us avoid manipulation better. Brain Games airs on Monday nights on Nat Geo and is available to stream after it airs.

Impact Partners BrandVoice: 3 Tax Subluxations Chiropractors Have And How To Adjust Them

Devices You Own Were Among Billions Vulnerable To...