NBA 2K League Three For All Showdown: How To Watch Details, Prize Money, And Participants

Like every other sports league in the world, the NBA 2K League is working overtime to stay busy, and to provide its fans with relevant content during a difficult time across the world.

Those efforts and the cooperation of fans, social media influencers, league officials and NBA 2K League players generated a first in the young organization’s history.

On March 27, the league will host its first Three for All Showdown. This will be an online-based 3-on-3 tournament featuring fan-organized teams, top female 2K players and a host of social media influencers.

The tournament will not be played in the traditional Pro-Am mode that we see with NBA 2K League games. That is an exclusively 5-on-5 experience. Three for All will be played in NBA 2K20’s popular MyPARK mode.

The tournament will have an NCAA-style bracket setup, but rather than have a single-game elimination format, each matchup will be a best-of-3 setup until the final round, which will be best-of-5.

The event will have two stages.

The first stage includes the fan-organized teams. Last week, the NBA 2K League opened this part of the event to its community by allowing fans to sign up to participate. The submissions and subsequent acceptance created the brackets listed below.

Four of the players selected were a part of the NBA 2K League 2020 Draft Pool: 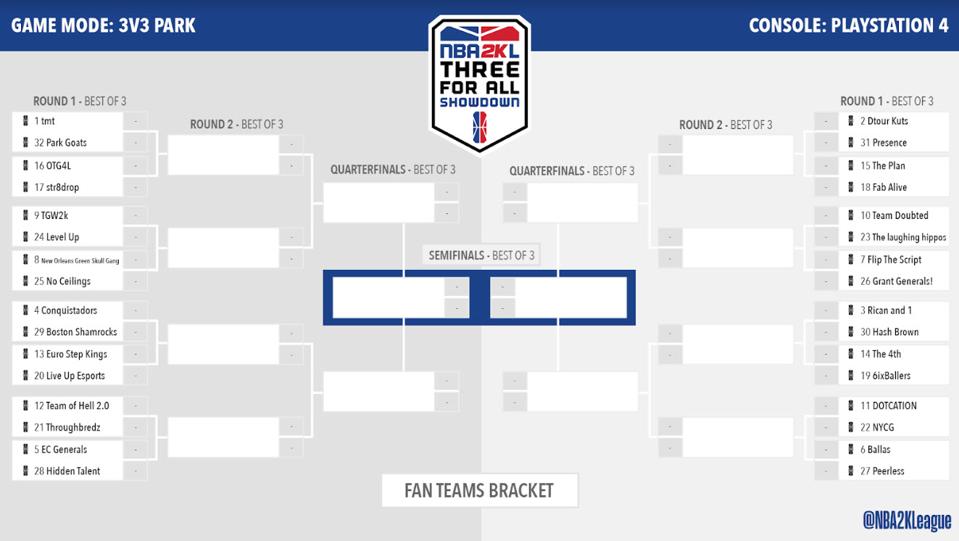 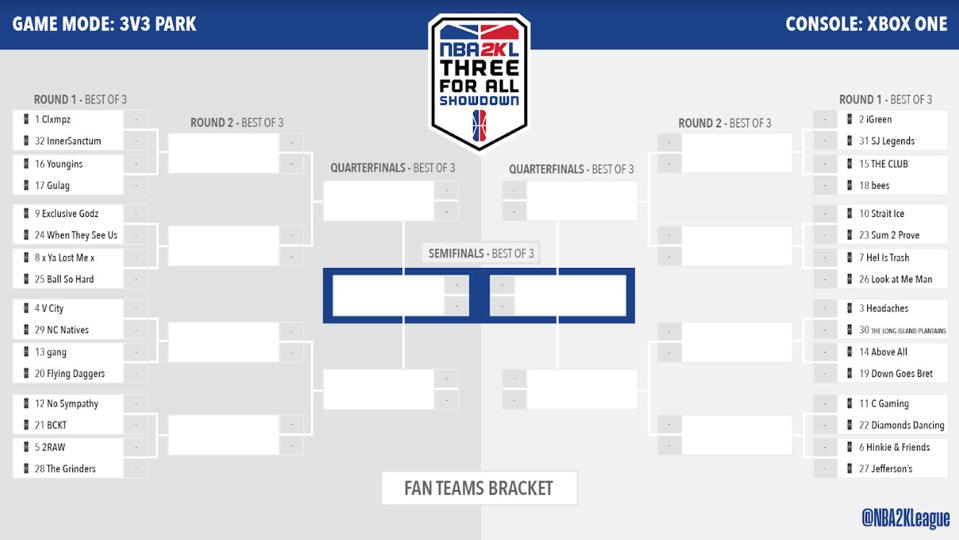 The bracket above is separated into two 16-team sections, which is divided by platform (PS4 and Xbox One). The teams that emerge from the PS4 and XB1 side will compete against each other to crown a Stage 1 champion.

In addition, the top performing teams from the first stage will be invited to participate in the second, which will take place from Tuesday, March 31 through Friday, April 3.

That format will be similar, but it will consist of 2K League players, top female 2K players and influencers.

That portion of the stage will be revealed at a later time.

The prize pool for the tournament will be $25,000 with the following split of the cash prizes, per NBA 2K League’s official site:

How to Watch Coverage of the Three-for All Showdown

You can see the brackets unveiled and the event discussed on the Black Frank White’s Show on Twitch here.

You can watch all of the Three-for-All action on the NBA 2K League’s Twitch or YouTube channel.