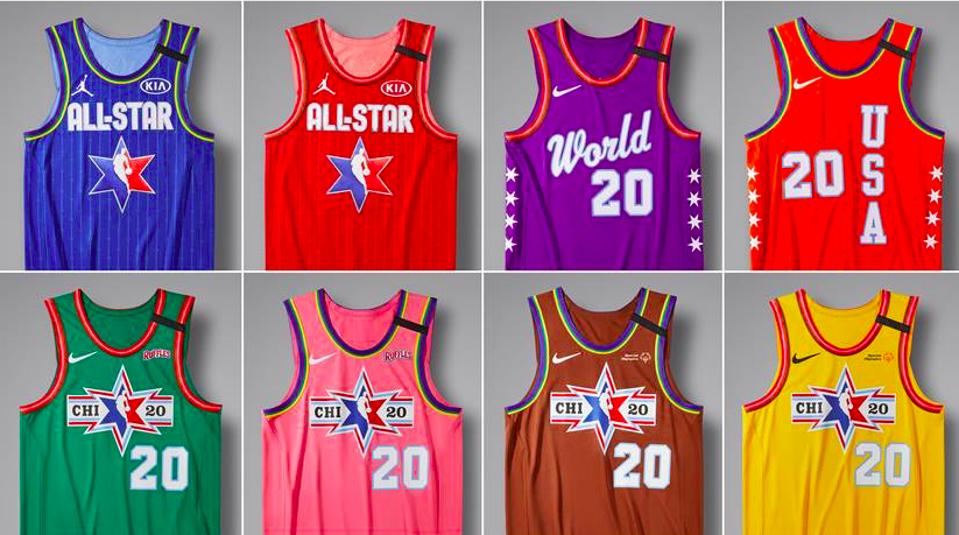 The NBA All-Star Game jerseys will honor both Kobe and Gianna Bryant, as well as showcase the city … [+] of Chicago’s six-point star.

When NBA All-Star Game jerseys were initially revealed, the colorful uniforms gave a nod to Chicago’s six-peat Bulls team, the city’s six point star and the train lines. But in the week since basketball great Kobe Bryant died in a helicoptor crash along with his daughter Gianna and five others, Jordan Brand and Nike AllStar jersey reps went back to the design to add additional features.

Each of those stars on that nine-star patch represent the people who died in the fatal helicopter crash. There is a star each for John, Keri and Alyssa Altobelli, Sarah and Payton Chester, Christina Mauser, Ara Zobayan and the Bryants.

Other than the added patch, the original design and colors for the jerseys will remain the same, according to officials. Each of the eight jerseys is in a specific color that tracks to the colors used to represent and differentiate the city’s eight elevated train lines and subways. The city has a pink line, a blue line, a red line, a purple line, a brown line, a green line and a yellow line, amongst others. The train line that runs closest to the United Center on the city’s West Side is the Blue Line. That color will also be worn by Team Lebron. The Red Line’s red jersey, which is arguably the city’s longest line and the only one that runs from the South Side to the North Side, will by worn by Team Giannis — also fitting given the importance of the Red Line to public transit commuters.

The All-Star Game jerseys also specifically give a nod to the 90s-era alternate uniforms worn by the Six-Peat-winning championship Bulls team, upon which Michael Jordan played. Fans will recognize the pinstripes and the Chicago star integrated within. The six point star is a nice touch, as it is the same star that adorns the Chicago flag. The silver satin used for each of the numbers is a hefty nod to the “worn patina” on the side of the L train cars. (As a Chicagoan I can attest to this patina. It’s silver. It’s also, oddly, always shiny even in the middle of a snow storm — the better to see the train with, I suppose.)

The League making a last-minute adjustment to the jerseys is more than appropriate, as is the Chicago-centric design. Team LeBron and Team Giannis rosters for the 69th NBA All-Star Game will be revealed on TNT for a special 2020 NBA All-Star Draft show presented by Jordan Brand. It airs on Thursday, Feb. 6 at 7 p.m. ET.

How To Grow Your Startup With The Help...

The WHO Is On TikTok. Is The World...