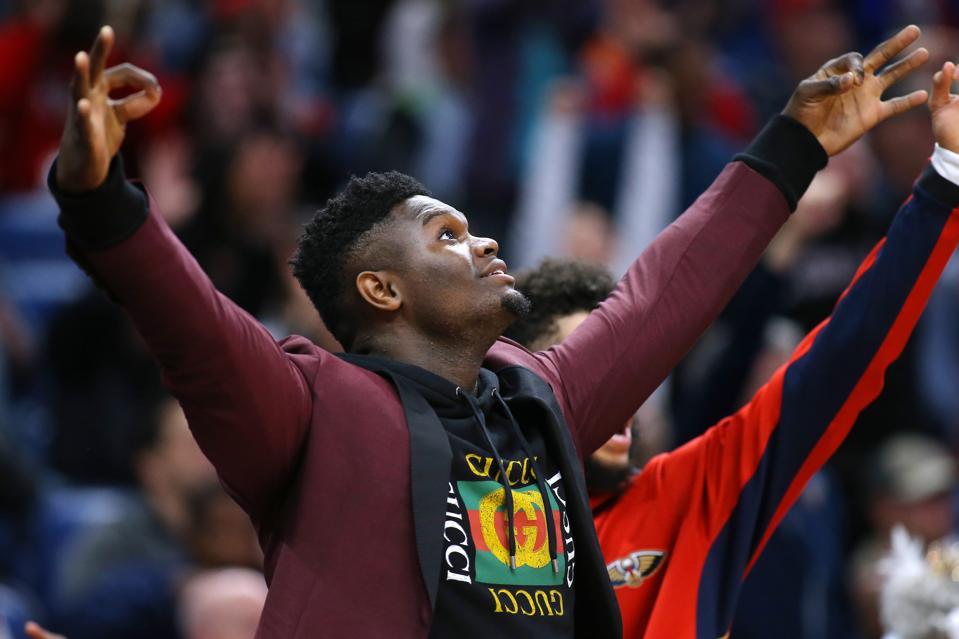 NEW ORLEANS, LOUISIANA – OCTOBER 31: Zion Williamson #1 of the New Orleans Pelicans celebrates … [+] during the second half of a game against the Denver Nuggets at the Smoothie King Center on October 31, 2019 in New Orleans, Louisiana. NOTE TO USER: User expressly acknowledges and agrees that, by downloading and or using this Photograph, user is consenting to the terms and conditions of the Getty Images License Agreement. (Photo by Jonathan Bachman/Getty Images)

David Griffin had a great start to his tenure as the newly-hired New Orleans Pelicans Vice President of Basketball Operations. He drafted Zion Williamson, overhauled the roster and spent the summer boasting about having an MVP candidate leading a playoff contender.

Then Zion Williamson went under the knife. Opposing teams started slicing through the Pelicans’ defense too easily. The losses have added up and updates from the team regarding Williamson’s recovery have been rare until recently. It was all quiet on the western front for most of November but a December debut was mentioned by the team. The six-to-eight week timeframe given by the team was also a countdown clock for impatient fans.

Griffin has felt the anxiousness in the arena. He heard the grumbling fans and saw the apathetic shrugs after the last few losses. The trickle of early departures only inspires more fans to beat the traffic the same way the team is being beaten on the court. The swaths of sold seats that sit empty hurt the team’s image as much as the television broadcast. He knew an update was necessary, especially after Alvin Gentry said Williamson had yet to resume on-court activities.

Demands for Williamson’s return will get out of hands based on the initial hype alone. The team will not be releasing the specific metrics being used to gauge when Williamson should return to full-contact basketball. They should not be asked to, as that is part of Williamson’s personal medical history. Strong and silent on some issues is a feature of Griffin and Aaron Nelson’s new regime, not a bug.

The team can explain the on-court process, which Griffin did live while watching a home game against the Phoenix Suns.

Griffin said, “He very likely will not be asked to take the pounding of back-to-backs initially. There will be a sort of ramp-up for him to getting back to where you would call him full strength, but he’s certainly going to be playing, and we’re trying to win basketball games.

He added an obvious but harsh truth at the end: “Quite frankly, we’ve done a horrible job of that.” Still, Griffin was confident this team is making progress.

“Where we may be failing in terms of the short term, I’m very confident that we’re succeeding over the breadth of what we’re trying to do, which is build a sustainable winner. And we’re well on our way to that, despite the current record.”

It would be easy to chalk up the poor record to a string of injuries. New Orleans is among the league leaders in games missed. The Pelicans cannot defend the paint for long stretches because their two starting big men are dealing with matters far more important than basketball.

Williamson lost more than a few weeks due to a meniscus tear, he also learned that he is vulnerable. He can only do so much as a 19-year-old rookie just learning the game and his limits in the NBA. His new post-surgery routine before his rookie debut meant getting adjusted to a new diet, workout regime, and approach to learning the playbook.

Likewise, Derrick Favors has battled nagging injuries and now is dealing with his mother’s death. Favors needs time to grieve far more than the team needs 28 minutes a night. Frankly, any fan demanding either player rush back is showing their true colors.

The Pelicans are vulnerable as a team without Williamson on the court and the expectations of a playoff push are waning fast. Griffin made clear that Williamson will be sitting out at least one game in back-to-back situations. New Orleans has seven such occasions. Griffin just announced Williamson will miss another ten percent of the season.

This news will ruffle the feathers of ticket scalpers and television executives. Some fans will be upset as well. However, most fans will be more accepting of the situation now that they have heard from the new face of the front office. Now, timelines and expectations for the team’s season can be adjusted accordingly.

Is It Time To Let Out The Genetic Genie Out Of Its Bottle?

Want To Improve The Social Determinants Of Health?...