Home Technology New York Is Working With Amazon, Others To Test Cargo Bike Delivery; Will Your City Be Next?
Technology

New York Is Working With Amazon, Others To Test Cargo Bike Delivery; Will Your City Be Next? 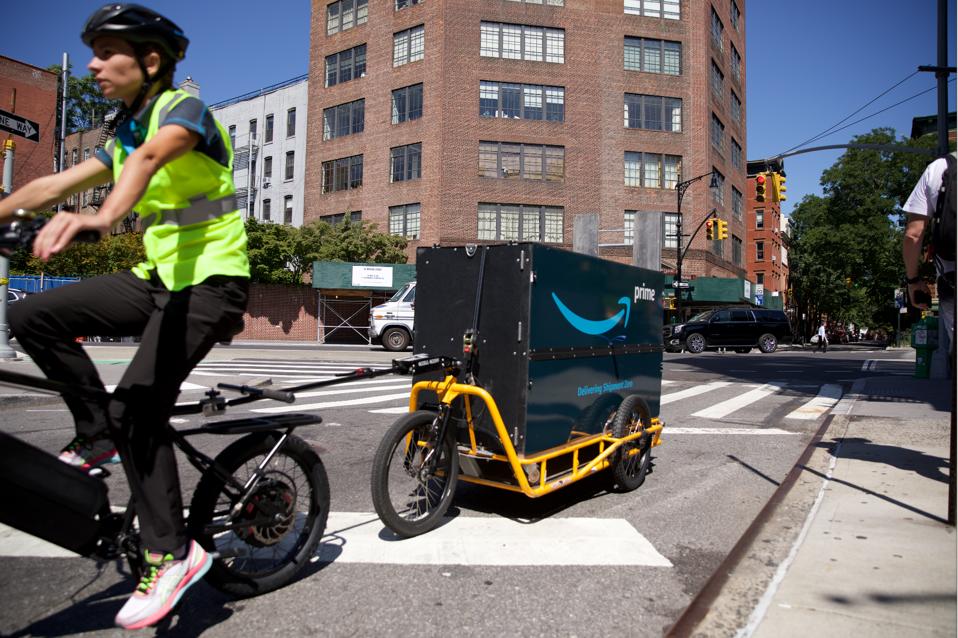 Amazon is working with New York City government as part of a pilot program to use electric cargo … [+] bikes to meet increased online delivery demand.

With online sales set to hit another record high this year, delivery trucks are common sights in densely populated urban markets, clogging streets as they try to meet consumers’ ever-faster delivery demands. Now New York, the largest U.S. city, is about to see if commercial cargo bikes can bring some relief.

New York is working with e-commerce giant Amazon and delivery heavyweights UPS and DHL to deploy about 100 cargo bikes for delivery in busy Midtown and Downtown Manhattan south of 60th Street. The pilot will last six months and may be extended for another six months. The city said it welcomes other freight companies to participate.

Over 2 million deliveries are made in New York daily, with about a million freight trips each day passing through New York’s five boroughs, City Council Speaker Corey Johnson said in a statement in which the city announced the pilot program.

Even before Wednesday’s announcement, Amazon had been using electric cargo delivery bikes in New York the past ten months to deliver Prime Now grocery orders in Manhattan and parts of Brooklyn’s Williamsburg neighborhood from three of its Whole Foods stores. It said each cargo bike it uses can take one delivery truck off the road. With a fleet of 90 already in the city, Amazon said it plans “to significantly grow that number in the coming months.”

The company said that it’s also tested delivery bikes in other locations but that New York is the largest market for the initiative.

New York joins a growing number of places around the world adopting environmentally friendly commercial cargo bikes, hoping that the move will help relieve congestions in city streets, reduce carbon emissions and lower the number of fatal accidents. Trucks have been involved in a “disproportionately high number of cyclist fatalities” in the city this year, NYC DOT Commissioner Polly Trottenberg said Wednesday.

Cargo bikes are flexible—able to travel in the city’s expanding bike lanes, for instance—so the initiative may also help respond to consumers’ growing demand for ultra-fast delivery. New York’s pilot is expected to be closely watched and may serve as a template for other densely populated markets.

UPS said it began using cargo bikes in 2012 in Hamburg, Germany. It delivers via handcart on foot and by bike in more than 30 cities in Europe, including Paris, London and Rome.

In the U.S., the Atlanta-based company, which ended a months-long cargo eBike test in Seattle it had announced in October 2018, said it’s testing eBike delivery in Portland, Oregon. It will look to start another one in Seattle soon, a spokeswoman said.

The pilot in New York will mark DHL’s first U.S. deployment of its Cubicycle, with electric pedal assistance, first introduced in the Netherlands in 2015. The company said its global fleet of about 85 cargo bikes is now also used in Germany, Belgium, Hong Kong and Singapore.

DHL said its delivery bikes have “enjoyed great success in Europe,” adding that each cargo bike has helped to remove at least one conventional delivery van from the road.

Widespread adoption of the cargo bikes won’t come without challenges.

A delivery truck can carry 400 parcel packages on average, versus the 40 parcels a cargo bike can take, according to a study published this year by The Urban Freight Lab at the University of Washington.

It found cargo bikes are “more cost effective than delivery trucks for deliveries in close proximity to the distribution center, where there is a high density of residential units and low delivery volumes.” But a large batch of deliveries to one major office tower could be completed by one truck versus deploying at least 10 freight bikes to do the job, it said.

“They were not the most cost efficient vehicle type for the observed route,” the study said. “Though EA (electric assist) cargo bicycles have the potential to optimize specific nodes of the supply chain, they certainly are not a one-size-fits-all solution for urban freight.”

Related on Forbes: Why Black Friday had more online shoppers than Cyber Monday

Related on Forbes: Amazon Go looks to expand as checkout-free shopping catches on across the retail landscape

CES – Show Or No Show? Meetings Behind...