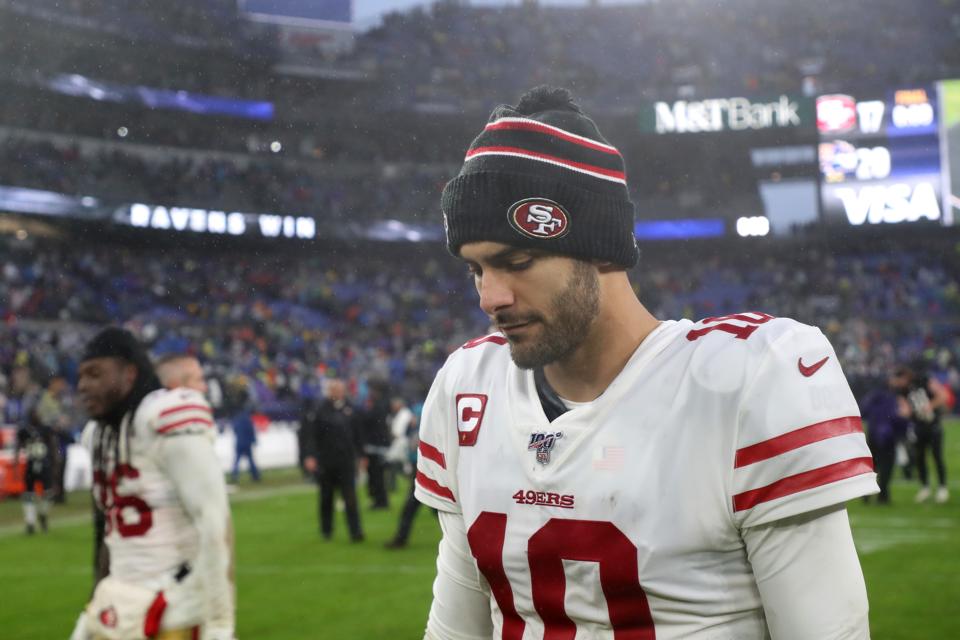 Jimmy Garoppolo and the 49ers just couldn’t do enough against the Ravens in a potential Super Bowl … [+] matchup during NFL Week 13 on Sunday. (Photo by Rob Carr/Getty Images)

The San Francisco 49ers knew that it was not going to be easy going into Baltimore and taking on the Ravens Sunday afternoon. The 1 PM ET start in a game clear across the country added to this. Taking on MVP favorite Lamar Jackson magnified this further.

In the end, Baltimore came out on top with a hard fought 20-17 victory in rainy conditions at M&T Bank Stadium.

In what could very well have been a Super Bowl preview, the 49ers went tit-for-tat with Jackson and Co. They just couldn’t stop the Ravens on a final drive that culminated in a 49-yard game-winning field goal from Justin Tucker as time expired.

At this stage in the season, there’s no moral victories. San Francisco entered Sunday’s action with a 10-1 record. The team rightfully believed that it would win this game.

Even then, a narrow loss in these conditions helped the 49ers prove their worth as a top-end Super Bowl contender. That’s among the biggest takeaways from this game. Here’s a look at some others.

San Francisco seemed to be building up for a game-tying field goal late in the second quarter. It had the ball at its own 42-yard line with over a minute left. That’s when Shanahan let the clock go down to 29 seconds. A 16-yard run from Raheem Mostert ultimately set the 49ers up in Baltimore’s side of the field.

Unfortunately, Shanahan’s decision to let the clock run down prior to that play led to a 51-yard field goal attempt from Robbie Gould in the rain. The kick was blocked, enabling Baltimore to head into the half with a 17-14 lead.

One has to wonder if the 49ers would have been able to drive further into Baltimore’s territory for an easier field goal if clock management on Shanahan’s part was better.

Then, late in the fourth quarter, San Francisco faced fourth-and-one from the Baltimore 35-yard line. Having put up 174 rushing yards in the game, the 49ers shockingly decided to have Jimmy Garoppolo drop back and pass the ball. It was knocked down at the line, ending what was San Francisco’s final drive of the game before Baltimore drove down for the game-winning field goal.

In what ended up being a three-point loss, these two decisions from Shanahan loomed large. It’s easy to play Monday morning quarterback. But he’s going to have to answer to this, and did so after the game.

Lamar Jackson entered Sunday’s game having accounted for 12 passing touchdowns and zero interceptions in his past three outings. The MVP favorite has been on a record-breaking streak of late. We knew this was going to be a strength versus strength matchup against a 49ers pass defense that’s on pace to yield the fewest yards in nearly four decades.

Sure the rain played a role here, but San Francisco’s secondary was absolutely amazing against Jackson. It held the young quarterback to 105 passing yards on 23 attempts. Rookie receiver Marquise Brown caught one pass for one yard on two targets.

This defense is Super Bowl ready. It proved that in more ways than one against the NFL’s highest-scoring offense on Sunday.

Despite having caught just two passes for 17 yards on four targets, this Pro Bowl tight end was absolutely amazing in the blocking game Sunday. San Francisco needed it with left tackle Joe Staley still sidelined. More than anything, Kittle opened up huge hole after huge hole for Raheem Mostert (146 yards) in the game.

This just goes to show us how darn good of an all-around player Kittle is. It might not show up on the box score, but he was among the best players in the game. 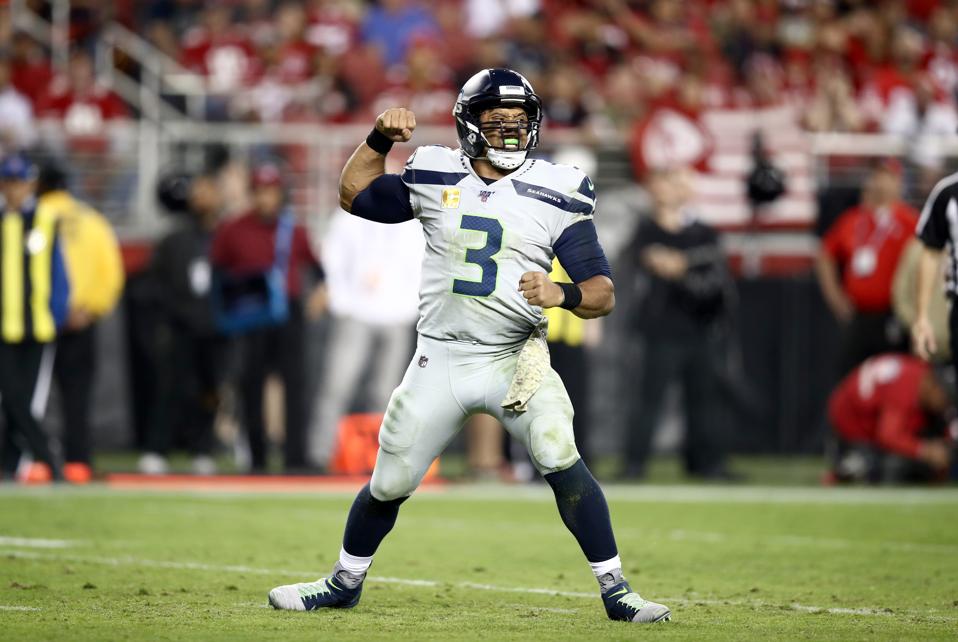 Russell Wilson and the Seahawks can take first place from the 49ers on Monday. Photo by Ezra … [+] Shaw/Getty Images)

By virtue of their loss, the 49ers fell to 10-2 on the season. They will now watch and see if the Seahawks are able to take out the Minnesota Vikings at home on Monday night. If Russell Wilson and Co. do in fact come out on top, San Francisco will head into Week 14 in a first place tie in the NFC West. Given that Seattle has already defeated the 49ers in Santa Clara, they would technically be in second place.

What this pretty much does is guarantee that Week 17’s game against the Seahawks in Seattle will be for the NFC West and potential home-field advantage in the playoffs.

It’s crazy to think about. The 49ers are 10-2 with their two losses coming by a combined six points. Despite this, there’s a chance the team might be forced to play in Green Bay, Minnesota, New Orleans or Dallas/Philadelphia in the wild card round. Next week’s outing against the Saints in New Orleans now looms even larger.

No Rest For The Weary

San Francisco will stay in Florida in between Sunday’s game and next week’s matchup against the Saints. It’s the continuation of the toughest three-game slate in NFL history. Sure the playoffs are pretty much a lock for the 49ers, but seeding is going to be huge here.

Both the 49ers and Saints head into that matchup with 10-2 records. They are followed in line by the Seahawks (9-2), Packers (9-3) and Vikings (8-3). It goes without saying that the final month of the season is going to be crazy.

Following Week 14’s outing with New Orleans, San Francisco gets a brief reprieve with a home game against the three-win Falcons before closing out the season against the division rival Rams and Seahawks. Yeah, there’s no rest for the weary here.

With Matt Breida missing his third consecutive game, Raheem Mostert came up big. He tallied a career high 146 yard on 19 attempts and is averaging north of six yards per rush this season. The expectation here is that the former undrafted free agent will see more action moving forward.

Speaking of seeing action, rookie Deebo Samuel continued to show out in a big way. The second-round pick put up 18 receptions for 296 yards in his previous three games. He added 61 total yards on three touches Sunday, including an absurd touchdown catch from Jimmy Garoppolo to open the scoring.

Rain had a major impact in this game. Baltimore and San Francisco went for it on fourth down a combined five times in the game. Each passed up on multiple long field goals due to the conditions. Meanwhile, the pass rush was pretty non-existent for both sides. Jackson was sacked just once with Garoppolo going down two times. If these two teams do end up meeting in the Super Bowl, this isn’t going to be an issue.

Jimmy Garoppolo managed the game pretty well on Sunday. Despite losing a fumble in the first half, Garoppolo completed 15-of-21 passes for 161 yards with a touchdown and zero interceptions. Garoppolo has now thrown 14 touchdowns compared to four interceptions in his past six games after starting the season with a seven-to-six split. Not too shabby.

Champagne, LVMH, Gruyère: Here’s What Could Be Hit...

On CRM: From Salesforce To Zoho, Which Of...

Why Winning Companies Are Making Bigger Bets On...