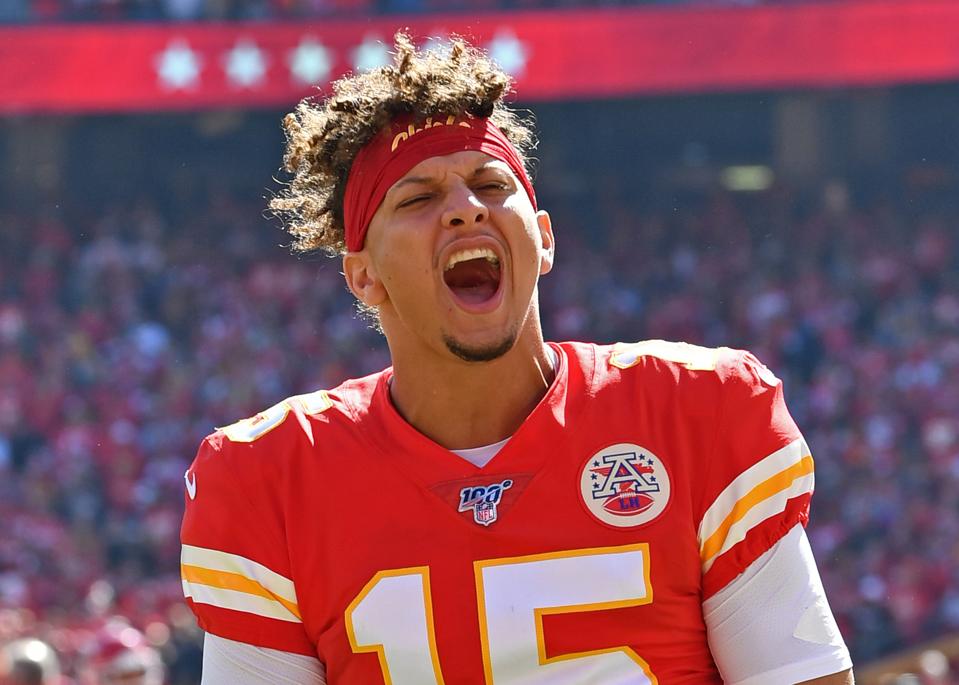 KANSAS CITY, MO – OCTOBER 13: Quarterback Patrick Mahomes #15 of the Kansas City Chiefs reacts prior … [+] to a game against the Houston Texans at Arrowhead Stadium on October 13, 2019 in Kansas City, Missouri. (Photo by Peter G. Aiken/Getty Images)

Week 14 of the 2019 NFL season is an important one, as the results for many of the 16 games on the schedule will play a crucial role in shaping the field for the upcoming NFL playoffs. It all begins on Thursday Night Football when the Dallas Cowboys travel to Soldier Field for a date with the Chicago Bears. Dallas is desperate to climb back above .500 to get some breathing room atop the NFC East after losing on Thanksgiving, while Chicago finally clawed to the same 6-6 record with back-to-back victories in its last two games and needs to string together another “W” to keep its faint postseason hopes alive. This is far from the only showdown to get excited about, as the Week 14 schedule is rife with numerous other key battles that will have an impact on the 2019 NFL Playoff picture.

Sunday will be absolutely loaded with action, with a full 13 contests taking place throughout the day for the first time since bye weeks began back in late September. There will be a nine-game flurry of kickoffs at 1 p.m. ET, headlined by a pair of 10-2 teams in the San Francisco 49ers and New Orleans Saints going head-to-head in a clash that may not only determine which team earns a first-round bye in the NFC playoffs, but home-field advantage throughout them as well. This timeslot will also feature the Baltimore Ravens, who currently appear to be the best team in football, being tested by a feisty 9-3 Buffalo Bills squad that is surprisingly in the running to shock the world by not only winning this matchup, but has a chance to wrest the AFC East title away from the slumping New England Patriots.

Speaking of the Patriots, they are set to partake in the late afternoon’s must-watch matchup, as the Kansas City Chiefs are heading to Foxborough for a rematch of last year’s epic AFC Championship Game. The Pats will be trying get back on track after losing just their second game of the 2019 NFL season this past Sunday, but it won’t be easy to turn things around against an opponent looking to avenge a pair of costly defeats. Both the AFCCG and the 2018 regular season meeting between these clubs were decided by a single score and oddsmakers are expecting more of the same on Sunday They’ve installed the Pats as three-point chalk, so don’t be surprised if this one comes right down to the wire yet again. Week 14 will wind down with the NFC West taking center stage on Sunday Night Football when the Seattle Seahawks and Los Angeles Rams duke it out in a primetime affair that will have plenty of playoff implications. The week comes to an end with the Philadelphia Eagles renewing their longstanding rivalry with the New York Giants on Monday Night Football.

Now that there are only three weeks left in the campaign, those in picks pools and other betting challenges are running out of time to get a leg up on their competition. If you are still in the running in one of those pools, or just trying to win money—or break even or lessen the losses—for the year, then look no further than this article to find some winning predictions from pro handicapper Jon Price of SportsInformationTraders.com. The Vegas expert has sent along his best bets for the upcoming slate and you won’t want to miss which teams he is picking to cover the spread this week. Before getting to those picks, have a look at the complete schedule, kickoff start times, updated odds, viewing information and key betting trends for every Week 14 game during the 2019 NFL season.

Dave Tuley posted an update on how underdogs and road teams have fared against the spread during the 2019 NFL season:

Field Yates posted an update on the NFL Draft order if it were to start ahead of Week 14:

Turning Back The Clock: The Biggest Golf Business Stories Of The Decade

The UN Calls For More Decisive Steps Towards...

Netflix’s ‘The Witcher’ Is The Best Live-Action Video...

AT&T And Free Conferencing Are Facing Off As...

How The Coronavirus Is Impacting Small Business Owners

What Is The Magic Number Of Employees In...