NHL Trade Deadline: Lou Lamoriello Rewards The Islanders By Ramping Up For A Playoff Push 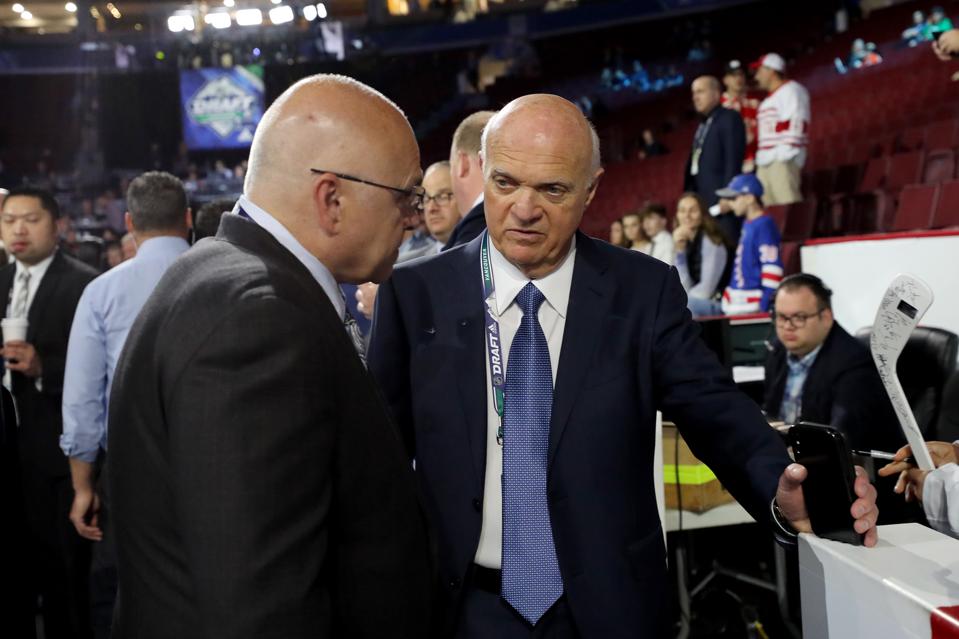 The greatest poker face among North American pro sports executives is almost surely possessed by Islanders general manager Lou Lamoriello, who knows exactly what he wants to reveal and when he will decide to reveal it.

So there’s little reason to doubt Lamoriello put all his cards out on the table during a conference call Monday afternoon, when he said he would have been fine standing pat instead of not trading three draft picks to the Senators in exchange for center Jean-Gabriel Pageau, whom the Islanders immediately signed to a six-year contract.

The additions of Pageau as well as defenseman Andy Greene — whom Lamoriello acquired from his former employer, the Devils, on Feb. 16 — should better position the Islanders for a playoff run in a few weeks. The Islanders, who occupy the first wild card spot in the Eastern Conference but are almost as close to missing the postseason (they are two points ahead of the ninth-place Columbus Blue Jackets) as they are to climbing into second place in the Metropolitan Division (they are three points back of the Penguins) and earning home-ice in the first round, rank 23rd in the NHL in goals and were down to six defensemen prior to Greene’s arrival.

But Lamoriello didn’t make a move last season, when the Islanders, who lost John Tavares off a team that missed the playoffs by 17 points in 2017-18, were in the midst of the most surprising regular season of any NHL team. The Islanders ended up sweeping the Penguins in the first round to reach the conference semifinals for just the second time in a quarter-century.

“I think when you make a move or you don’t make a move, there’s always a reason, not an excuse, why you did or you didn’t do it,” Lamoriello said. “And you have to be careful at the given time, what the needs are and who the type of player is that you would want in there. And you target that. If you don’t get that player, you just don’t make a move for the sake of doing it.”

The Islanders’ recent performance also would have backed up an inactive deadline. They are tied for the 10th-most points in the NHL and have played sub-.500 hockey (19-17-4) since a franchise-record 17-game point streak from Oct. 12 through Nov. 23. A case could be made Lamoriello would have been better off holding on to assets instead of bulking up for a playoff run likely only to last one or two rounds.

Of course, last season’s Stanley Cup winners, the St. Louis Blues, finished tied for 10th in the NHL during the regular season and were 17-19-4 through 40 games. Only twice in the last six seasons has the Stanley Cup champion finished among the league’s top five in the regular seasons (the Penguins were fourth and second during their back-to-back run in 2015-16 and 2016-17).

When Islanders coach Barry Trotz directed the Capitals to the Stanley Cup in the spring of 2018, he did so following a regular season in which Washington finished tied for sixth in the NHL. That followed back-to-back seasons in which the Capitals won the President’s Trophy but never got to the Eastern Conference finals. Lamoriello won three Stanley Cups with the Devils, who never finished higher than fourth in the NHL in any of those championship seasons.

In other words: Crazy, random stuff happens in the playoffs if you can just get there. And the Islanders, in win-now mode following a rebuild that’s lasted most of this century and with a 77-year-old general manager, a recent Cup-winning head coach behind the bench and 10 players (counting Pageau) signed through or beyond their 30th birthdays, almost surely needed an upgrade to reach the tournament, especially while playing in a division loaded with contenders who also made additions over the last few weeks.

If nothing else, the acquisitions of Greene and Pageau serve as a reward to the Islanders’ core for buying into the sum-is-better-than-the-parts philosophies of Lamoriello and Trotz. One has to imagine Lamoriello enjoyed seeing Anders Lee, who succeeded Tavares as captain following the latter’s departure, pass up an empty net with a chance at his first career hat trick Sunday and instead dump the puck to the wide-open Josh Bailey.

“Last year, we would have made the move if we could have gotten the player that maybe we felt we could have added and not just been another player,” Lamoriello said. “Fortunately for us, this year, we were able to get that player in that position. So I think the message to the players in both years (was) we believed in them and we will always try and make the team better.”

“You always have to wait and see,” said Lamoriello, the poker face never wavering. “Sometimes I’ve seen the smallest moves make a major difference. I don’t want to go back to my past, but we’ve made major moves at a given time and we’ve made little tweaks here and there to fill needs with a certain type of person.

“And I think that what we tried to do today — I don’t think there were many people out there that could have filled this need, and we were fortunate to get one of them that could.”

Box Office: How ‘Jumanji’ Succeeded By Following The...

No Seat At The Table For Restaurants: CARES...

Atlanta Will Have To Get Back In Line...